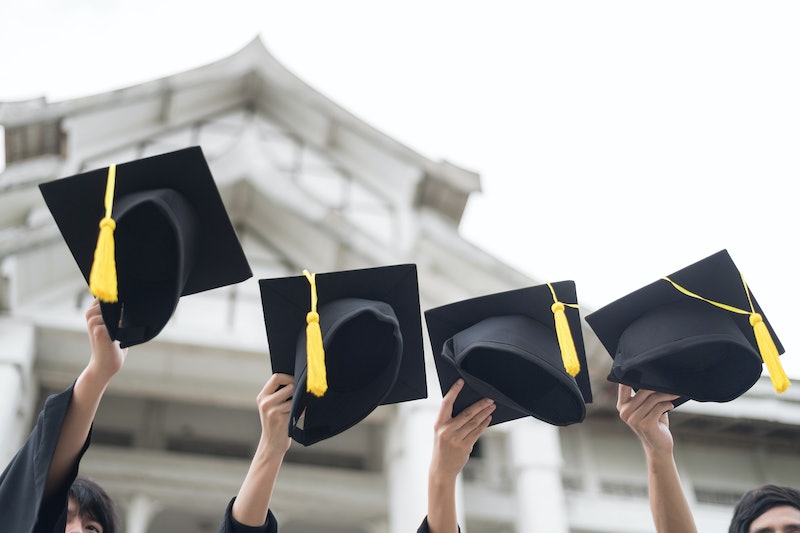 Finding a job after university is difficult at the best of time, let alone for when you're given only have four months to do it, or else face leaving the country that you've come to call home during your studies. For a while, this has been reality for overseas students in the UK. But now things may be changing, with a new visa ruling that gives international students in the UK two years to find a job after graduating from university. The new proposal, which was announced today (Sept. 11, 2019) by the Home Office, will apply to intentional students who start courses at undergraduate level or above from 2020 onwards.

This move will reverse the one made in 2012 by Theresa May, who was Home Secretary at the time. May previously said any more than four months would be “too generous,” the Guardian reports. The new policy would allow students to apply for any job, no matter what they studied or the skills they have gained.

There will be no cap on the number of students who can apply for this visa, iNews reports, and those who find a job that fits the relevant criteria will be able to apply to switch to a skilled worker visa.

The change coincides with an announcement by Boris Johnson of the launch of the world’s biggest genetics project, led by the charity UK Biobank, according to the Independent. The £200 million study collected data and DNA samples from 500,000 people. Johnson said (via the Independent) projects like this “wouldn’t be possible” without international students, stating:

Breakthroughs of this kind wouldn’t be possible without being open to the brightest and the best from across the globe to study and work in the UK. That’s why we’re unveiling a new route for international students to unlock their potential and start their careers in the UK.

Chief Executive of Universities UK Alistair Jarvis believes this move to extend work visas for international students will be hugely beneficial for the UK economy. According to the BBC, he stated:

Evidence shows that international students bring significant positive social outcomes to the UK as well as £26 billion in economic contributions, but for too long the lack of post-study work opportunities in the UK has put us at a competitive disadvantage in attracting those students.

He went on to say that his organisation had been campaigning for this policy change, which he believes "will put us back where we belong as a first choice study destination." He continued: "Not only will a wide range of employers now have access to talented graduates from around the world, but these students also hold lifelong links."

Labour Shadow Home Secretary Diane Abbott said the Labour Party has always believed intentional students should find employment after studying. According to HuffPost, Abbott said: "Labour has always said graduates should be able to work here after their studies because it enables them to contribute to our economy, our universities and to research, and helps us to attract the brightest and best from around the world." She went on to say what a "pity" it was that ministers previously supported measures that "did the opposite."

However, she went on to criticise the salary limit of £30,000, which is placed on these kind of work visas. "Many of the graduates doing fantastic medical and other research earn less than that," Abbott said. "Government policy will prevent us from attracting them to live and work here."