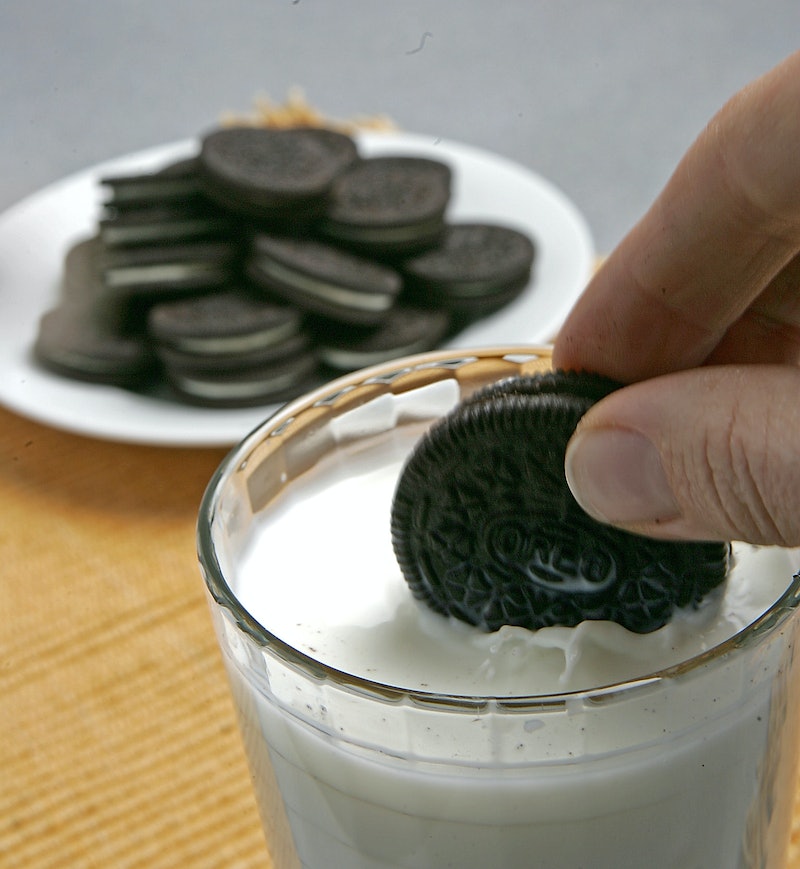 And today in Very Important Scientific Updates: Research has determined exactly how long you should dunk your Oreos in milk before you eat them. I know, I know — not only is there an optimal dunking length, but moreover, people have actually taken the time to figure out what it is? Best. Job. Ever. So, if you’re planning on eating Oreos today — or at any time in the future, either near or far — then listen up; I’m about to tell you exactly how to get the most out of your cookie dunking experience.

The delightful discovery comes to us courtesy of Utah State University’s Splash Lab, which “seeks to unravel the physical mechanisms of fluid behaviors,” according to its website. The lab tends to work on “fun and interesting” projects that they try to make as accessible as possible — and given that the cookie dunking experiment came out of an actual conversation the researches had had while eating cookies and milk,I’d say they’re accomplishing their goal quite handily. Said Dr. Tad Truscott, who heads up the lab, to KSL, “That question kept coming up, like, ‘What is the best dunking time?’ And everybody kind of argued about it.” So they did what all good scientists do: They set out to answer their question.

For two weeks, the researchers tested out cookies ranging from Oreos and Nutter Butters to Chips Ahoy and graham crackers, dunking them halfway in two percent milk for times as brief as half a second and as long as seven seconds. Then, after the dunking was complete, they weighed the cookies so they could determine how much milk they had absorbed.

Oreos, it turns out, absorb 50 percent of the total amount of liquid they’re capable of holding in a single second. They absorb 80 percent by the time they hit two seconds. The number didn’t change during the third second; then, during the fourth second, it reached 100 percent absorption — that is, it sucked up all the milk it could. It appears that “keeping your cookie in the glass any longer than five seconds does not lead to any additional milk entering the cookies,” according to the study results.

Interestingly, the researchers found that pretty much every type of cookie “draws in milk at roughly the same rate,” as Truscott put it; however, exactly how long the cookies fare structurally after the dunking varies dramatically depending on the type of treat. The researchers performed a second test to explore this area of interest in which they dunked all the types of cookies they had for six seconds, then clamped them horizontally and timed how long it took them to collapse. Graham crackers fared the worst, falling to pieces in just eight seconds; Oreos, meanwhile, did quite well, lasting for a full five minutes.

Fun fact: Scientists have actually been working on the whole “How long should I dunk my cookies?” conundrum for quite some time. According to Mashable, a physics professor at the University of Bristol in the UK named Len Fisher proposed the idea in the late ‘90s that Washburn’s equation — an equation published by Edward W. Washburn in 1921 that describes capillary flow, or the rate at which liquids penetrate bundles of cylindrical tubes — could be used to predict the ideal biscuit dunking time. According to Fisher, that ideal time was three and a half to five seconds.

The Splash Lab’s research further refines Fisher’s prediction by backing it up with physical data — although for what it’s worth, “optimal dunking time” might a little more relative than the results of this research might suggest. Exactly what your personal optimal dunking time is depends on how you like your cookies: As Food & Wine points out, if you prefer crisp cookies, even after dunking, you’ll probably only want to submerge them for about one second; if you like them soft, but still with a tiny bit of crunch to them, two seconds is the way to go; and if you’d rather your Oreos be completely soft, but not falling apart, three or four seconds is ideal. I suppose it’s also possible that you might really,really like cookies that are falling apart, so if that’s you, five seconds might actually be up your alley.(You do you and all that.)

In any event, now that you’re armed with the knowledge of exactly what happens to an Oreo during the dunking process and when, you can make the determination for yourself of how long you should dunk in order to achieve your own personal cookie ideal.

Just, y'know, make sure you've got an appropriate sized glass. If your cookie doesn't fit, you'll be sad. Now go forth and enjoy!