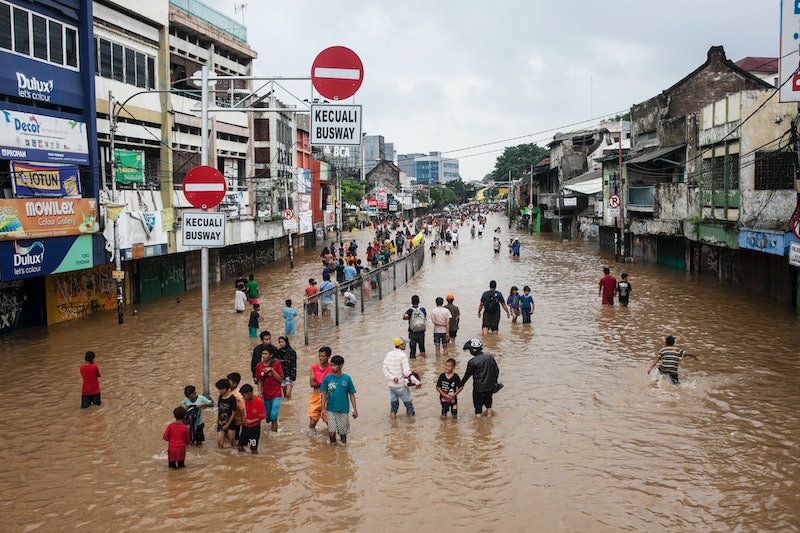 From wildfires to hurricanes, there have been a number of deadly natural disasters across the globe in recent years. And for thousands of people every year, these natural disasters don't just mean a disrupted week or month — they mean a permanent change of address. The number of climate refugees in the world is expected to grow, thanks to the global effects of climate change. It's becoming such an urgent crisis that even presidential candidates are addressing it in their platforms.

Julián Castro was the first presidential candidate to mention climate refugees in his climate change plan in September. Per Vox, he wrote in part, “[The United States] cannot wait for climate change to destabilize a society before providing assistance." And though this is a big step, the crisis is far from being adequately addressed. In fact, people haven't even agreed upon an official definition for "climate refugee."

To make matters more confusing, the official definition of "refugee" has very strict parameters and requirements — and they don't apply to people who are displaced because of extreme environmental changes. The legal definition of a refugee was agreed upon by 148 countries in a United Nations multilateral treaty in 1951 and reads in part,

Over the last few years, this definition has left out millions of people who were displaced because of environmental changes and natural disasters. Climate refugees aren't necessarily fleeing persecution, but they share a crucial similarity with refugees who are: both groups of people are moving by necessity.

Dr. Andrea Simonelli, Ph.D., an assistant professor in Virginia Commonwealth University's Department of Political Science, has researched government responses to human migration and points out how difficult getting refugee status is in the first place, even if your circumstances fit the official definition. "You don’t just cross a country, claim legal asylum and it’s done," she tells Bustle. In other words, even if there was an internationally recognized definition for climate refugees, it doesn't guarantee them all asylum.

In 2017 alone, numerous weather-related disasters led to mass displacements around the globe. For example, recurrent flash floods and landslides across Nepal destroyed approximately 89,000 homes and displaced around 381,000 people, per the Internal Displacement Monitoring Centre's South Asia report. What's more, a staggering 1.6 million people were displaced by the Hunan floods in China that same year. Similarly in 2018, 848,000 people were displaced in the Houston, Texas area from flooding, and over 200,000 people were forced to evacuate due to wildfires in southern California, per IDMC's Americas report.

The numbers don't stop there. According to NPR, an average of 24 million people are displaced every year because of natural disasters. And what's more, scientists and climate experts expect this number to continue to rise: approximately 143 million people across sub-Saharan Africa, South Africa, and Latin America could be displaced by 2050, a World Bank report predicts.

The science behind climate change provides irrefutable evidence that disaster occurrences are increasing in both frequency and intensity, rendering them less and less "natural." Inevitably, a new lexicon needs to emerge to describe this monumental challenge. "We can’t be looking back," Simonelli says. "We know it's going to be hotter, we know we have to make adjustments for it, we know more people will be forced to migrate; the way we do things has to change."

In 2018, 164 countries formally adopted the U.N. Global Compact for Migration, the first policy that includes a section on migration caused by climate change. Though the compact itself didn't establish required protocol for countries dealing with climate refugees, and is entirely voluntary and non-binding, it represents a first step toward addressing a global crisis.

More like this
Why Experts Say Sleeping With A Fan On Isn’t Totally Risk-Free
By Sophie McEvoy
The 6 Best UV Umbrellas, According To A Dermatologist
By Rachael Green
The 8 Best Indoor Door Mats For Your Home
By Jenny White
Your Daily Horoscope For August 16, 2022
By Alexandria Lettman
Get Even More From Bustle — Sign Up For The Newsletter