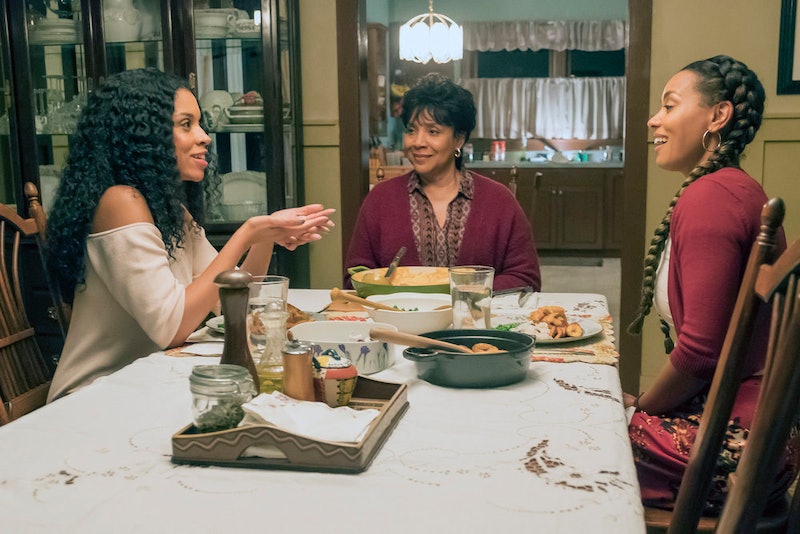 Fans had to wait three seasons for it, but we have finally arrived at the Beth backstory episode of This Is Us. Airing Feb. 19, the episode synopsis says it centers around Beth's trip home to take care of her mother Carol — and the "unexpected realization" it sparks. Beth's mom is played by Phylicia Rashad of The Cosby Show fame (on that show, she played Clair Huxtable). But after Beth's spotlight episode draws to a close, is that the end of this mother-daughter story? Or will Beth's mom be in more This Is Us episodes?

For now, the Wall Street Journal reported that it's just this one episode that Rashad is scheduled for. But, in an interview with the Los Angeles Times, Rashad and Susan Kelechi Watson (who plays Beth) left things a little ambiguous. "You never close a good door. You always keep a good door open," Rashad said, when asked if a time jump backwards or forwards could lead to more Beth and Carol time. "Believe me, the first thing I said after we finished, I said, 'Will you come back? Will you come back?'" Watson added.

Watson was thrilled that the casting department picked Rashad to play Beth's mother, because Rashad had been a role model for Watson as an actor. "People like [Rashad] have walked through the door and made a path," Watson told the Sioux City Journal. "Now, people look on a show like This Is Us and it’s not a strange thing to see a black woman roll through with box braids and a suit."

And, acting together was a bit of a reunion for Watson and Rashad, because Rashad was one of Watson's teachers at Howard University. Watson was attending as a fine arts major, according to the Times, and Rashad was teaching a master class.

But, onscreen, there's some love lost between the two women. Watson told the Times that Beth has a very different dynamic in her childhood home than what she has with Randall in their home. "I’m used to Beth being able to express herself pretty freely — if she has an opinion, she finds a way to put it out there, and is sort of bold in that way," Watson said. "She’s not like that around her mama ... there was a very strong feeling of discomfort. She's not being the woman that she is in her own house. And she has to conform and be something that works for this environment."

According to the new episode promo, part of the reason Beth and her mom have a frosty relationship seems to stem from Carol putting a damper on Beth's dreams of becoming a dancer. "I remember when I was a little girl, I was dancing. You didn't have to take it from me," Beth says in a scene with her mom. "You had gone as far as you could go," Carol responds.

The Buffalo News' Alan Pergament reported that this clash over Beth's dancing dream may leave viewers upset with Carol. "There may be a post-show debate over whether Bethany’s mother mishandled her child’s dream of being a big-time dancer. Or they may conclude she was right but just handled it in the wrong way as well-meaning parents often do," Pergament wrote.

But whatever Beth's mom did to her career goals back then, it seems Beth is reclaiming that path now. The "unexpected realization" the synopsis promised seems to be that Beth decides to explore dance as a career again. It likely won't be as an actual dancer at this point, but it could be as a teacher. We know from the flash forward that Older Beth is a high-powered ballet teacher. She seems to be making those moves now. In fact, after peeking through the window of a local dance studio, she tells Randall at the end of the promo, "I'm ready to tell you what I want to do next."

Because she seems to be choosing the career her mother disapproved of, it does leave a window open for Carol to return in the future. Perhaps she'll get a chance to see how her daughter reclaimed the dream she took away. But, even if Tuesday's episode is the only glimpse of Beth's mom that we get, it'll still provide so much more information about what makes this fan-favorite character tick, and viewers have been waiting for this day for so long.