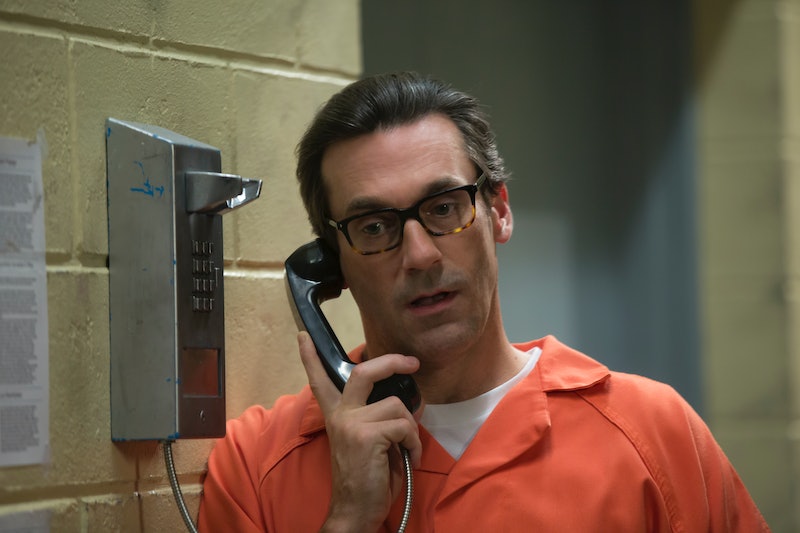 Eric Liebowitz/Netflix
By Mallory Carra
May 19, 2017

Netflix's Unbreakable Kimmy Schmidt Season 3 is now streaming and it starts off with the title character in a bit of a weird situation. SPOILERS ahead for the third season. Season 3 picks up after the revelation that Kimmy and her former captor Richard Wayne Gary Wayne (played by Jon Hamm) were legally wed during her captivity in the Indiana bunker. But filing for divorce isn't as simple as it seems, so how many Kimmy Schmidt Season 3 is Jon Hamm? According to IMDb, Hamm appears in only one episode in the third season, but Richard Wayne Gary Wayne's presence is certainly felt in several episodes.

Richard Wayne Gary Wayne starts off Season 3 still in jail and arguing with Kimmy via phone about the divorce papers. But in the third episode of the season, Laura Dern guest stars as Wendy, a divorce lawyer — and Richard Wayne Gary Wayne's new fiance — whom Kimmy feels she needs to protect from marrying her former captor. Kimmy also experiences several reminders of her past trauma throughout the third season, coming to terms with the fact that not all bunkers and reverends are necessarily as evil as the ones she had been traumatized by.

After she leaves Columbia University with an honorary degree originally meant for Jimmy Smits, Kimmy pursues a career as a crossing guard, but her marriage to Richard Wayne Gary Wayne, a registered sex offender, holds her back from obtaining the job. So instead, Kimmy decides to take a job at a startup founded by one of her Columbia classmates.

So even though Hamm is only one episode in Season 3, his character Richard Wayne Gary Wayne still influences much of Kimmy's life.