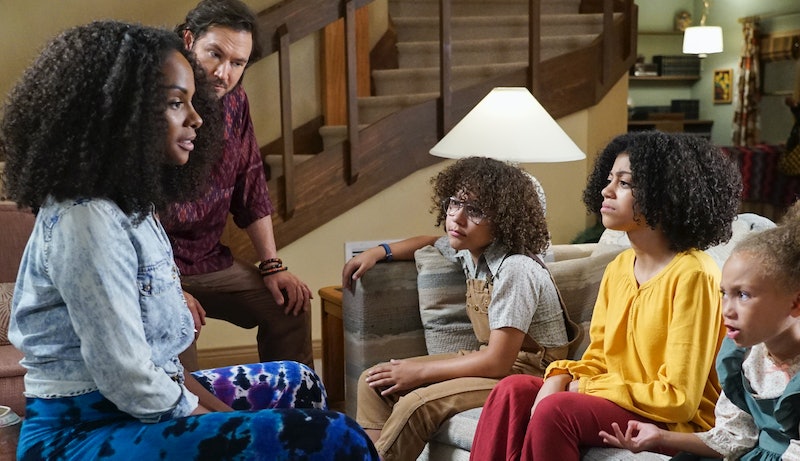 Not much about Rainbow Johnson's upbringing was black and white. ABC's black-ish prequel spinoff, mixed-ish, opens in the summer of 1985 when a then-12-year-old Bow (Arica Himmel, playing the younger version of Tracee Ellis Ross' beloved black-ish character) is living in a bubble on a hippie commune where social constructs of race don't exist — at least as far as she and her mixed-race family are concerned. That all changes, however, when an ATF raid strips Bow of her "peaceful little world" and she's forced to assimilate into suburban life. For the first time, she has to really examine her complex identity, and how the rest of society treats her background.

The mid-'80s setting makes sense given that this is a prequel, but according to mixed-ish showrunner and executive producer Karin Gist, setting the show in this time period was also helpful in terms of telling a specific story about racial identity. "We're able to use the cover of the '80s to challenge some of the things that we still think about and some of the same hurdles we have socially today," Gist explains to Bustle. "It's such a special little project that has the potential of opening the conversation on race on both sides and commenting on this really specific time period. We're hoping to move the conversation forward by showing all the diversity and inclusion."

Gist — whose past writing and producing credits include TV shows like Star, Grey's Anatomy, Revenge, House of Lies, and Girlfriends — wants the show to be what she calls an "immersive '80s experience." Viewers can expect to see nostalgic Easter eggs like Trapper Keepers and Cabbage Patch Dolls, as well as fun references such as "Rhythm of the Night" group DeBarge. Ellis' Bow, in voiceover, describes the musicians as her only role models, whereas mixed race kids today can look up to rappers (Drake), ballerinas (Misty Copeland), athletes (Colin Kaepernick), a president (Barack Obama), and a princess (Megan Markle).

Gist wanted real current events of the era to inform the series as much as possible, and describes mixed-ish as an homage to the classic late-80s/early 90s show The Wonder Years. But the show is more than a nostalgia piece. "What we're really excited about is being able to have the show tackle hot topics like black-ish does and comment on social issues in a funny way," she says.

Bridging the gap between the two ABC series is Ellis Ross, with whom Gist previously worked during their Girlfriends days. Aside from executive producing and narrating mixed-ish, Gist says the actor is heavily involved in the show, contributing to creative decisions — including casting Himmel as her tween counterpart.

Ellis Ross' own biracial heritage is part of what makes mixed-ish "near and dear to her heart," Gist says. Although the specific storylines won't necessarily be inspired by the actor's past, her real-life experience will help inform Rainbow's point of view. For example, in the Sept. 24 premiere episode, "Becoming Bow," the protagonist examines race through the lens of feeling forced to "pick sides" between her white and black identities. "Tracee was raised in this lane, so she wants to just make sure it's grounded and feels real," Gist adds.

In addition to Himmel and Ellis Ross (as the narrator), the main mixed-ish cast also includes Tika Sumpter (Alicia Johnson), Mark-Paul Gosselaar (Paul Jackson), Gary Cole (Harrison Jackson III), Christina Anthony (Denise), Mykal-Michelle Harris (Santamonica Johnson), and Ethan William Childress (Johan Johnson). In the future, there could even be an appearance from another biracial superstar: Mariah Carey, who sings the mixed-ish theme song, "In the Mix," according to Gist.

"Mariah's very excited about this show because of her own experience, and she was really clear about that and how it's really dear to her as well," Gist reveals. "We're still trying to circle around and figure out what her role would be, but we definitely want her to impact Rainbow's life in a in a pretty big way."

Gist, who's also currently writing Sister Act 3 for Disney+ and a Fox pilot with Lee Daniels, further explains that mixed-ish is "all about inclusion identity and coming into your own, no matter who you are, what your culture is, or how many of cultures you're made of, and just being yourself." That message is one that remains timeless — whether it's told in the present or the '80s.

More like this
At 28, Debra Jo Rupp Was Living A Much Different '70s Show
By Grace Wehniainen
At 28, Rosie Perez Risked Her Career To Stop Playing Stereotypes
By Gabrielle Bondi
'That '90s Show' Star Callie Haverda Got Advice From Mila Kunis & Ashton Kutcher
By Brad Witter
This 'Gossip Girl' Wardrobe Error Has Gone Viral On TikTok
By Alyssa Lapid
Get Even More From Bustle — Sign Up For The Newsletter
From hair trends to relationship advice, our daily newsletter has everything you need to sound like a person who’s on TikTok, even if you aren’t.