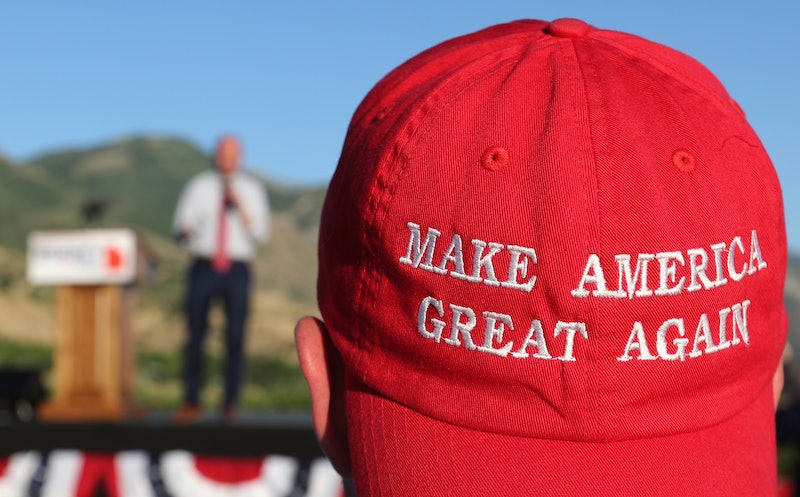 On Thursday, news broke that new tariffs would be imposed on $200 billion worth of Chinese imports — and this could affect President Donald Trump in a fortuitous way. Some “Make America Great Again" hats could double in price thanks to the tariffs, according to ABC News.

A merchandiser who imports the caps told ABC News that the headwear boasting the president’s 2016 campaign slogan may become much more expensive thanks to Trump's latest round of tariffs, which largely affect consumer goods.

A story first reported by The Associated Press revealed that California-based company Incredible Gifts is prepping for the tariffs by stockpiling the hats, which are bought from China and then embroidered in America. The company’s manager, David Lassoff, told The AP that he’s tried to get the hats from American manufacturing companies, but it would mean the hats would potentially cost twice what they do now. They’re already going for $16 on Amazon, and Lassoff told ABC he usually sells them for $9 to $12 dollars, which may then increase to $20 if they had to get the hats from the U.S. Lassoff also told The AP it’s unlikely all customers would be willing to fork out the extra dough — no matter how much they want America to be great.

Incredible Gifts isn’t affiliated with the Trump campaign, but Lassoff told ABC News he’s sold about "100,000 MAGA hats" since June 2015 when Trump came down an escalator and announced he was running for president of the United States.

And if prices of MAGA hats are going up, it could mean prices of spoof hats could increase as well. Since the "Make America Great Again" hats came on the scene, there have been plenty of callback caps and merchandise boasting slogans such as “Make America Read Again,” “Make Baseball Caps Blank Again,” and “Make Metallica Great Again.”

And if hats aren’t your thing, reports are also saying that the Chinese-American trade war and increasing tariffs could increase the price of products like beer, which honestly may make you want to reach for a beer even more. CNN reported that Coors announced the new tariffs on aluminum could mean that beer cans would be more expensive to make.

The aluminum tariffs would also affect car companies as they manufacture vehicles and motorcycles, according to USA Today.

All this news is a product of two of the world’s largest economies, U.S. and China, getting extra testy with each other over tariffs. Last week, the U.S. imposed tariffs on $34 billion of products from China — then China went, “back at you,” and upped the ante with a threat of tacking on an additional $16 billon.

The president then ordered U.S. trade reps to impose tariffs of 10 percent on an additional $200 billion of Chinese imports. This is all per a statement from U.S. Trade Representative Robert Lighthizer, who said all this craziness was all really because China's bad trading practices, especially when it comes to intellectual property.

“As a result of China’s retaliation and failure to change its practices, the President has ordered USTR to begin the process of imposing tariffs of 10 percent on an additional $200 billion of Chinese imports,” the statement said. “This is an appropriate response under the authority of Section 301 to obtain the elimination of China’s harmful industrial policies. USTR will proceed with a transparent and comprehensive public notice and comment process prior to the imposition of final tariffs, as we have for previous tariffs.”

All this is to say that the waging of the trade war may start affecting U.S. customers and MAGA hat-wearers in new and unexpected ways. Stay tuned.