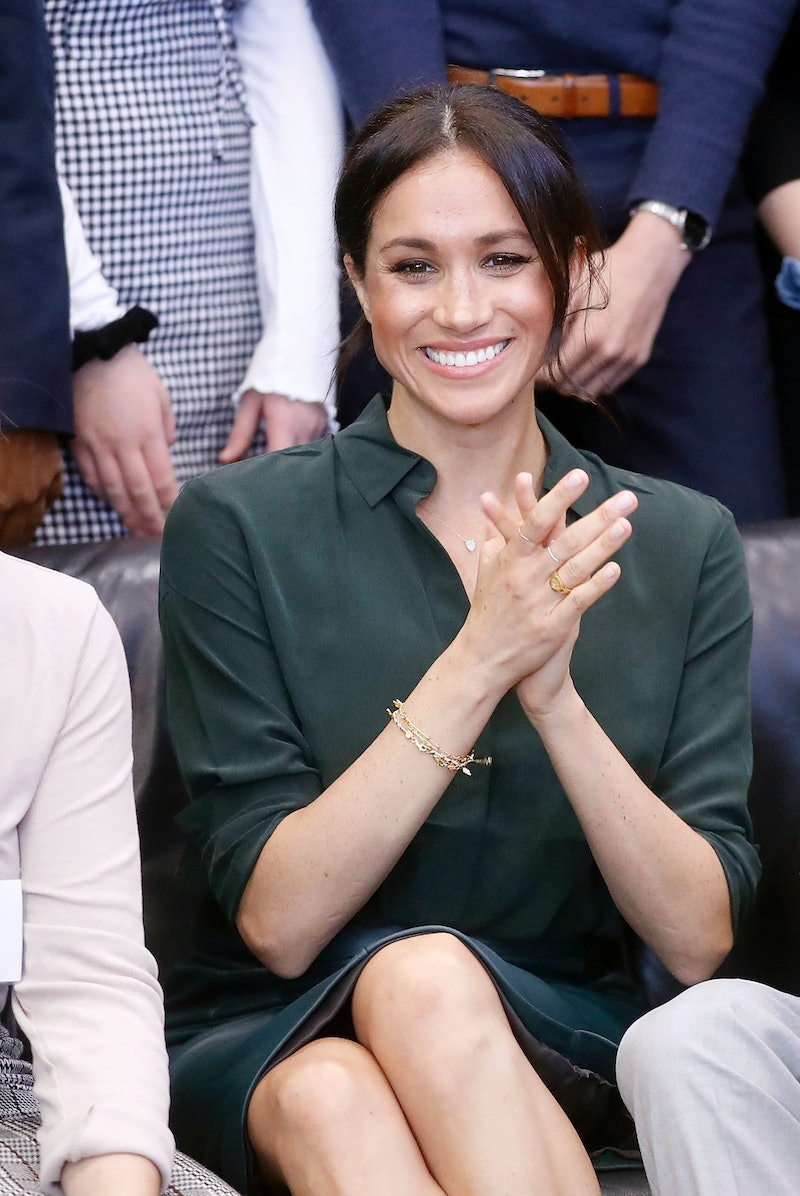 If there's one staple accessory Meghan Markle seems to have (other than her wedding ring, of course), it's pumps. The Duchess of Sussex isn't afraid to rewear her favorite shoes to events, and while in Australia, Meghan Markle's Sarah Flint pump solidified themselves as a staple piece in her wardrobe. In fact, Markle's shoe choices are the only pieces she repeats when heading out to events, and honestly, is there a bigger compliment than being re-worn time and time again by an actual princess (okay, she's a duchess, but whatever).

While Markle does have a few pair of shoes that she wears quite often (like her bow detail Aquazurra pumps), she's got a super classic pair that she wore when she and husband Prince Harry arrived for their royal visit to Australia. During their arrival, Markle wore a gorgeous burgundy and black coat with a pair of chic black pants. With the outfits, Markle wore a pair of Sarah Flint pumps with a tortoiseshell heel.

As it turns out, if you want to shop the style (and don't mind a bit of a splurge since they're nearly $400) the shoe isn't entirely sold out yet. While many of the sizes are now gone, there are still a few left you can shop.

This is far from the first time that Markle has worn the same tortoiseshell pumps, though. While Markle has a heavy rotation of other brands in her closet, shoes from Sarah Flint are definitely included.

Markle was first spotted in the pumps back in January 2018 when she and Prince Harry visited a radio station in London.

She then wore the same pair of heels in April when she attended an ANZAC Day service in London with Prince Harry.

Most recently, she wore the Sarah Flint design at an event celebrating the publication of the Hub Community Kitchen's Together: Our Community Kitchen for which Markle wrote the forward. While her blue and black outfit may have been the focus, the heels were a big deal as well.

Now, she and Prince Harry's royal visit to Australia is the fourth time she'll have worn the same pair of pumps. Honestly, once you find the perfect shoe, wouldn't you wear it more than once?

Plus, Markle seems to have found a few pair she loves from the brand. She's also been spotted in more of their styles. According to the website Meghan's Fashion, which chronicles everything the Duchess of Sussex wears, Markle has been spotted in flats, booties, and another pair of pumps all from Sarah Flint. Clearly, Markle loves their designs.

Now that Markle and Prince Harry have announced that they're expecting a baby, will her footwear game change? Probably not, especially when it comes to Sara Flint. Those gorgeous and classic Sarah Flint tortoiseshell shoes have the perfect chunky heel that's bound to make them more comfortable than most pumps. Of course, there's all of those flats she has already worn. Now just may be on the lookout for even more Sarah Flint from the duchess.