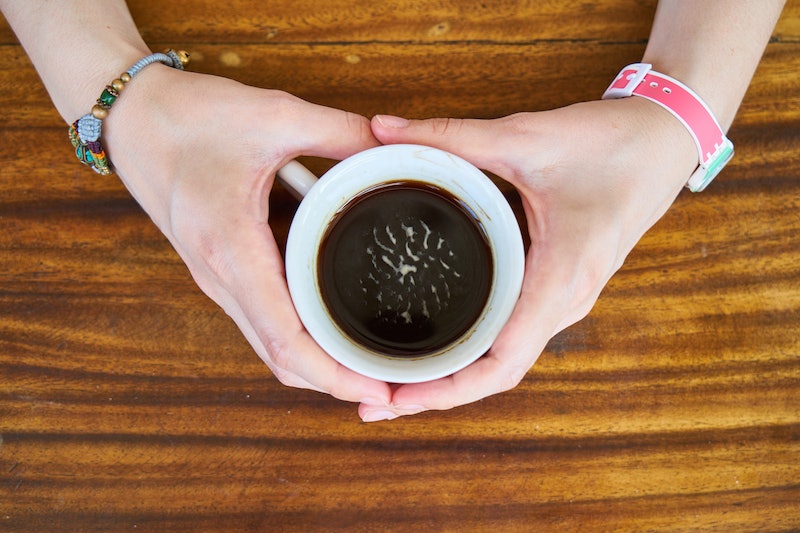 For some time now, the debate about whether coffee is good for you or not has raged hot and fierce: Some studies have suggested it has some incredible health benefits; others have suggested that it can be detrimental to our health instead; and still others have come out on the fence about the whole thing. But if you’ve been wondering how much coffee you can drink per day, good news: According to an expansive new study, having three cups a day does, in fact, impart a number of health benefits — so, hey, drink up!

Previous research has indicated that coffee might be able to do everything from helping us live longer to making our workouts more effective; heck, according to one study, it might even help stave off dementia. However, drinking too much of the stuff has also been found to give us issues like heart palpitations, heartburn, and anxiety. So where’s the line? How much is too much? Or, conversely, how much is not enough if you want to harness those supposed health benefits?

The magic number, it turns out, is three — or at least, it is according to a study led by Robin Poole of the University of Southampton and recently published in the journal BMJ.

Cooper would be so very pleased.

The current research isn’t based off of a whole new experiment; rather, it’s what the Poole and colleagues have termed an “umbrella review,” wherein the goal was to present a succinct summary of a wide body of research that exists about a given topic. In this case, the umbrella review looked at 218 existing meta-analyses:201 of them were based on observational research, while the remaining 17 were based on clinical trials. The breadth of the review was pretty substantial; the meta-analyses based on observational research included 67 unique health outcomes, while the meta-analyses based on clinical trials had nine.

The good news is that overall, coffee consumption was determined to be “generally safe within usual levels of intake” — but if you’re you want to get even more specific, the sweet spot was three to four cups a day. Drinking that amount lets you reap the health benefits of coffee without risk of harm.

Important to note: There isn’t actually a “universally recognized standard coffee cup size,” according to the study; what’s more, the “bioactive components”contained within a single cup of coffee can vary depending on factors like the type of bean used and the method used to actually brew the coffee. Generally speaking, though, a cup isn’t understood to be a full mug, which usually holds around 12 ounces of liquid (although they can be as large as 16 or even 20 ounces); a cup is only eight ounces, so two mugs of coffee (24 ounces) are roughly equivalent to around three cups of the stuff.

So, if you drink about two mugs of coffee a day, you’ll likely see a reduction in your risk for aaaaaaall of these health issues, according to this study:

However, it’s worth noting that drinking a lot of coffee can also be detrimental to your health. If you’re expecting, for example, you might want to skip it; the study found that high coffee consumption in pregnant people was associated with low birth weights, preterm births in the first and second trimesters, and pregnancy loss. Additionally, there was a correlation between high coffee consumption and increased risk of bone fractures in women, although not in men.

Also, as the BBC points out, caffeine — which often has a hand in the benefits associated with coffee — can be found in a lot of different foodstuffs and beverages; as such, if you’re trying to limit yourself to no more than 400mg of caffeine a day (which is the upper limit recommended by the FDA), you’ll need to keep track of more than just the coffee you drink. One eight-ounce cup of coffee typically has between 95 and 165mg of caffeine in it, according to the Mayo Clinic, but tea, energy drinks, soda, and foods like chocolate also contain caffeine — so make sure you’re being mindful of your total intake.

Furthermore, as Eliseo Guallar noted in an editorial about the study published in BMJ, we’re still just looking at a lot of correlation — not at causation. “Does coffee prevent chronic disease and reduce mortality? We simply do not know,” Guallar wrote, continuing, “Coffee drinking is a complex behavior determined by cultural norms and associated with multiple socioeconomic, lifestyle, dietary, and health behaviors.” As such, we can’t yet definitively say that drinking coffee is an effective means of prevention for, say, cirrhosis or cardiovascular disease.

But even if there’s still a lot we don’t know about the link between coffee and our health, this new study offers a wide array of other avenues to explore. When it comes to understanding our world and how we fit in it, every little bit helps — even when all we’re talking about is our daily coffee habits.

More like this
An Expert Weighs In On The Viral Raw Carrot Salad Trend
By Alexis Morillo
Dolly Parton Released 4 New Baking Mixes With Duncan Hines
By Alexis Morillo
16 Trader Joe's Appetizers That Are Total Party-Pleasers
By Kaitlyn Wylde
Do Green Powders Work As Well As TikTok Says They Do?
By Carolyn Steber
Get Even More From Bustle — Sign Up For The Newsletter
From hair trends to relationship advice, our daily newsletter has everything you need to sound like a person who’s on TikTok, even if you aren’t.