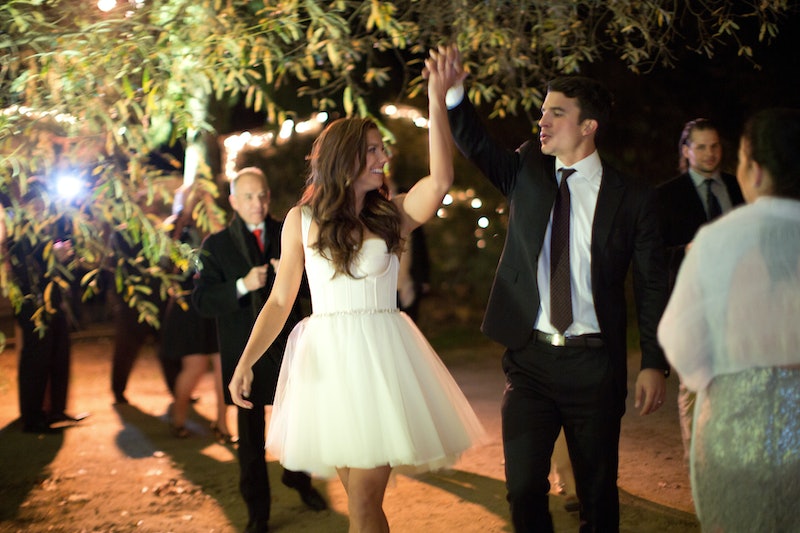 It is a truth universally acknowledged that weddings in this day and age tend to be pretty expensive. (Thanks, wedding industrial complex.) But when it comes to the average cost of a wedding in 2019, exactly what the price tag might be varies from state to state. Curious about how much a wedding costs in your own state? Good news: Market research firm the Wedding Report exists specifically to track and forecast, among other wedding-related things, spending within the wedding industry — and happily, one of the many ways you can examine their data and analysis is by state.

According to the Wedding Report’s methodology page, their data comes from a variety of sources ranging from the government (federal, state, and local) to proprietary surveys administered electronically. The government data is used to determine how many weddings were actually held in any given year, while the survey data is used to estimate and average out wedding costs. The most recent survey-based data set comprises 6,792 samples gathered in 2018.

In determining wedding costs, the Wedding Report collects data for a whopping 59 different products and services across 10 categories — although then again, given all of the things that many modern weddings involve, perhaps that number is unsurprising. The items tracked here range from big picture stuff (the venue! Food! Flowers!) to the smaller details (place cards! Wedding favors! Postage for save the dates, invitations, and thank you cards!). Average wedding costs are then calculated using a weighted demand average (WDA) — that is, the average spent times the demand. Notes the Wedding report, “Using WDA instead of a summed average gives a better calculation, because it takes into account all items that couples may or may not purchase.”

There are, however, a couple of things to keep in mind. First, even though these costs involve weighted averages, they’re still, y’know, averages; obviously not all weddings in any given state cost the average amount. Second, the cost of living isn’t the same across all geographic areas, so it’s worth remembering that just because a state is known for, say, having pricier weddings doesn’t necessarily mean that the weddings are more extravagant there than elsewhere; in some cases, it might just be a result of the services and items themselves generally costing more. Similarly, a state being known for having less expensive weddings doesn’t mean that those weddings are simpler or less elaborate — it just means the cost of services and items might be different.

And lastly, just because weddings in any given state cost a certain amount on average doesn’t mean your wedding has to cost that amount. Anecdotally, I got married in one of the most expensive states on the list (California), but for dramatically less than the average cost of a wedding in that state tends to be; and conversely, if you have the economic means and the will to do so, you can always spring for something way, way more expensive than the average cost in your state of choice. When it comes to weddings, I am a firm believer in the “you do you” principal: If you’re getting married, have the wedding that’s right for you and your partner — no matter what anyone else says.

In case you want some guidelines, though, here’s how much your average wedding costs in each state, grouped by price bracket:

The fewest number of states average out in this bracket — just nine — keep their wedding under $20k on average. A lot of that is likely due to cost of living in those states being a bit more affordable than it might be in other geographic areas; with the exception of two outliers — Idaho and New Mexico — all nine states are located in the South.

Meanwhile, the majority of states — 18 — fall in the $20k-to-$25k price point. They’re spread out across the country pretty well, although they tend to be clustered in the South, Midwest, and Southwest.

12 states keep things in the $25k-to-$30k range. These states are largely in the West, Midwest, and Pacific Northwest; most of them are landlocked, rather than coastal.

Weddings in coastal states — typically those in New England in the Northeast and in California in the West, or 12 states in total — tend to have the highest average price tags. It makes sense that the state with the single highest average wedding cost would be Hawaii; as Nerdwallet noted in 2018, the fact that Hawaii is an island means that there are limited resources available directly within the state itself. A lot of things have to be flown in from the mainland, which can up the costs considerably.

If you're curious about the exact breakdown of each state, you can take a look at their individual stats here.