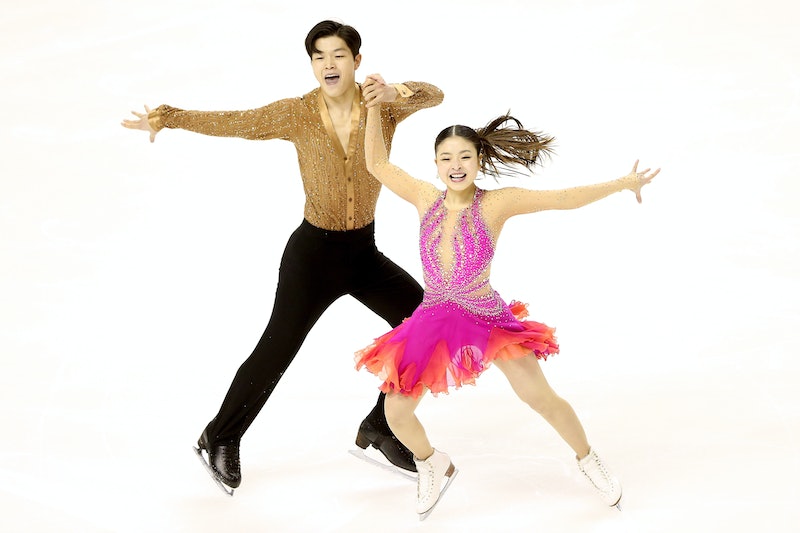 The glitz and glamor of the figure skaters as they skim across the ice at the Winter Olympics may dazzle, but audiences are witnessing the culmination of years of training — and, for elite competitors, a truly spectacular price tag. Between costumes, training, custom skates, choreography and other elements, being an Olympian in figure skating, or simply competing at an elite level, is a substantial financial commitment — one that supportive families and clubs can spend a fortune attempting to accommodate. The amount of money it can cost to become an Olympic figure skater can be seriously mind-boggling.

The most obvious area of impressive expense, for the public viewer at least, is the costumes — which don't come cheap. An investigation by The Gloss in 2014 found that all costumes for Olympic skaters are, by and large, custom-made — unsurprisingly, as it's not a good look to be in the same outfit as somebody else. According to the Gloss, elite-level costumes from designers can cost between $500 and $5,000, and skaters have two costumes, one for their short program and one for their long (and that's not counting spare costumes, in case one rips or gets dirty). They tend to need new costumes every year, too. Those spangles and sparkles are often applied by hand. And the performance "look" for female skaters in particular also involves make-up and hair, which at the elite level is usually applied professionally.

And then there are the skates. Estimates differ, but it's thought that custom skate boots, which are pretty standard at Olympic level, can be between $1,000 and $1,500 a pair, and competitors can wear them out annually — and that's not counting the cost of sharpening and maintaining them monthly.

Equipment, however, is only the beginning. In an investigation of the costs behind Winter Olympic sports careers, Forbes points out that virtually all Olympic-level figure skaters start as children, meaning years of lessons, private tuition, practice time, competition fees and other expenses. Forbes notes that elite-level figure skaters will likely have reached their peak with a price tag of around $100,000 on their past training and skating life.

Because of the significant investment, a wealthy — or at least financially stable — background is pretty necessary. Stories abound of supportive parents remortgaging homes, cutting down on expenses for other children, and making some extreme financial decisions to be able to afford the cost of sending an elite-level figure skater all the way to the top, and hopefully to the Olympics. Mike Slipchuck, director of Skate Canada, told the CBC that even as a low-level competitor, annual costs can reach $10,000 annually — but that the number could also rise to $30,000. If you reach Team USA, funding is provided and financial aid is also offered, but that's an elite pinnacle.

Once you reach the Olympics, expenses start to pile up, because the best choreographers, musicians, coaches and other elements of a successful competition come at a price. Every competition cycle requires a new routine, and getting the rights to music and coming up with new moves adds up on the balance sheet. Scott Hamilton, who won Olympic figure skating gold in 1984, told the Huffington Post that "I've heard everything from $25,000 to $80,000 a year. It can get out of control."

It's important to remember that being an Olympian doesn't immediately translate into financial success — in fact, far from it. Olympians can often encounter financial trouble, particularly after they retire from their sports, and only a select few of very lucky or very successful team members will attract sponsorships and advertising deals. Catch the public imagination or walk away with a medal and you may be rewarded, but it's in no way guaranteed. Prize money is available at other competitions, but in the Olympics you do it just for the glory — and the gold.

Being an Olympian of any kind is an extraordinary sacrifice, not only for the athletes themselves but for their families and support networks. And when you're watching Team USA take to the ice in PyeongChang, it's worth remembering that they've got there through years of very, very expensive work.

More like this
5 Crystals To Manifest More Money
By Megan McCarty
What Is Jeanie Buss' Net Worth? The Lakers President Is Uber Rich
By Hugh McIntyre
Your Home Could Seem So Much More Expensive If You Tried Any Of These Cheap Tricks
By Dena Ogden and Sara Brown-Rigoli
25 Quotes About Love To Share During Pride Month 2022
By Madeleine Aggeler and Emma Garza
Get Even More From Bustle — Sign Up For The Newsletter