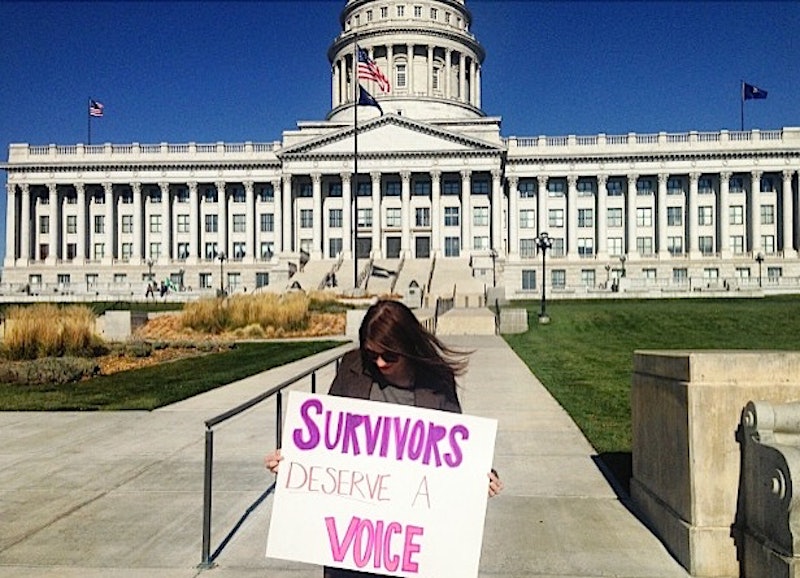 I attended one of my very first protests almost three years ago. Hundred of people were huddled on the steps on the Tennessee State Capitol building, protesting a local bill that was passed to limit abortion rights in the Volunteer State. As more and more people gathered around, chanting “My body, my choice,” we pushed our way inside to the rotunda of the building. Being at the front of crowd — and two feet away from a wall of police officers — I was handed a drum, and began beating it to the rhythm of the chants. There’s no denying I got an adrenaline rush knowing the legislative session was ended early because of our protest. But more importantly, those few hours in the Tennessee State Capitol were the catalyst for my activism — the first time I found my voice as an advocate. I realized when I found my voice, using it was an essential kind of self care — one that I could access through protesting.

The second annual Women’s March just on the horizon, and set to happen in locations across the globe this upcoming weekend — with the main march taking place in Las Vegas, Nevada, on Jan. 21. According to the ACLU, peaceful protesting is a civil right in the U.S. protected by the First Amendment. However, people who choose to protest are often met with backlash: In the past twelve months alone, six states introduced bills to make it legal for drivers to hit protesters if they do not do so "willfully," according to CNN. Though none of this legislation has been enacted, it's a reminder that protest is not so kindly looked upon in some parts of the country.

I believe protesting makes many privileged people uncomfortable because it is a powerful way that marginalized communities exercise their collective rights and voices. Many of the oppressive structures that exist in the United States today — racism, ableism, sexism, and more — thrive on our complicity and silence. The recent swell of sexual assault survivors sharing their experiences through the #MeToo Movement exemplifies just how much our society had ignored the injustices created by rape culture. And much like the #MeToo Movement, protesting gives many people the opportunity to come forward and say “enough is enough."

It's important, of course, to recognize that being able to safely protest can be a privilege, and not everyone can safely participate in direct action in that way. But it is possible to resist injustice, no matter what that form may take, and to be empowered by that resistance.

Not only can protesting be self-care because it helps you speak your truth, but it fosters connection and community care — a concept that is basically self-care on, well, a community level. Before I felt empowered to protest in public, felt uniquely alone in my struggles: it wasn’t until I began attending protests and speaking with other activists that I felt safe enough to publicly speak as a survivor, as a queer person, and as someone with disabilities.

Audre Lorde, the Black feminist poet and civil rights advocate, once wrote in a posthumously published journal, “I see protest as a genuine means of encouraging someone to feel the inconsistencies, the horror, of the lives we are living. Social protest is to say that we do not have to live this way.” The majority of protesters do not attend rallies and marches as a hobby, an escape for boredom, or as an outlet for anger. Most of us protest out of necessity, and out of a desire to finally be heard, seen, or have our experiences realized by others. Self-care looks different for everyone, and for some, protesting is a way in which we heal individually, and as a community.

Self-care isn’t always about bath bombs, meditating, or unplugging: Self-care can translate into actions that empower you. Self-care can also mean setting boundaries, and respecting yourself — on an interpersonal or societal level. Protesting may not be for everyone, but for some of us, it provides the only supportive platform to freely and finally express ourselves.