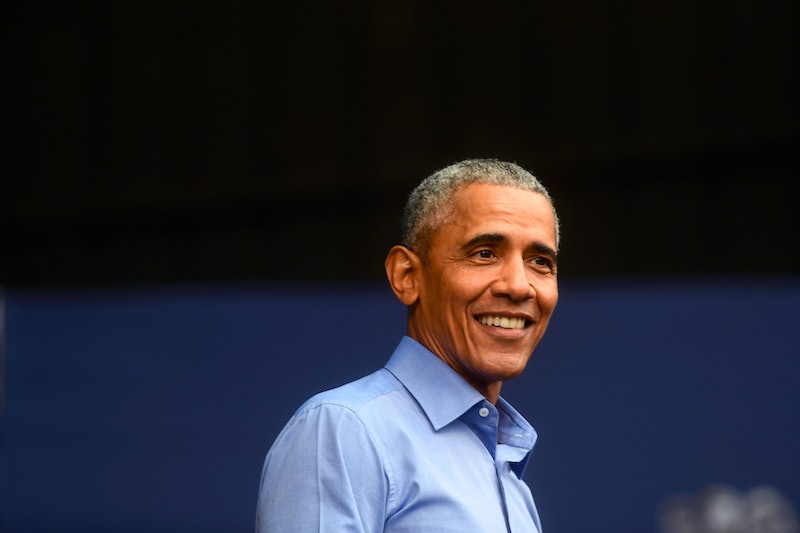 The unveiling of Kehinde Wiley’s portrait of the 44th president was one of the most important days of the former president's public life since leaving the White House. But the artist known for depicting African-Americans in front of floral backdrops and in regal settings told the New Yorker that Barack Obama didn't want his official portrait to show him as a self-aggrandizing politician.

"Much has been made of this painting, but I think what we have to keep in mind is that Barack Obama is incredibly sensitive to representation, and to art history," Wiley told the New Yorker's Vinson Cunningham. "And so he wanted to make sure that this image communicated who he is in the world. He, from the very beginning, wanted to have a very relaxed, man-of-the-people representation."

Obama appears more relaxed than other presidential portraits, and Wiley said the pose actually came about naturally. When Obama went to take some photos for Wiley to paint from, there was "a moment of repose" when Obama just sat normally. "It felt authentic," Wiley said. The fact that Obama has an open collar and isn't wearing a tie add to this natural aesthetic.

"I was looking at preexisting images of heads of state, kings, aristocrats, nothing was working. It was all too demonstrative. It was all too self-aggrandizing," Wiley told the New Yorker.

The portraits of both Obama and the former FLOTUS were revealed in February to a lot of excitement (a photo of a little girl in awe of FLOTUS's portrait even went viral), and Obama's depicts the way he led the nation without coming off as superior. During his time in the White House, photos of Obama often showed him goofing off, dancing, or jogging down a hallway. He was the type of president who enjoyed connecting with real people and signaling to voters that he wasn't all that different from them. The fact that Obama specifically told Wiley to paint him in a more relaxed pose highlights that his "man-of-the-people" persona was a conscious choice.

It's difficult to imagine President Donald Trump giving the same guidelines to the person painting his presidential portrait. For starters, 45 ran for office largely on his success as a businessman that he claims made him a billionaire — not exactly something most Americans can relate to. A portrait of a much younger Trump that hangs in his Mar-a-Lago resort shows him in more of a power stance than Obama's portrait, as Trump is seen standing with one knee raised and one hand in his pocket.

Wiley's portrait of Obama didn't simply portray the former POTUS in a natural stance, but also weaved in details about his personal life.

"It was interesting for me, personally, to be able to meld the language of the decorative in painting with his life story," Wiley told the New Yorker. "When you look at the background, you’ll see that there are flowers from Indonesia, flowers from Kenya, Hawaii, the state flower of Chicago. And it all kind of gives you a sense of space and place and his trajectory. I think for many people it was a little bit jarring to see his image peering through this field of flora. But there was a method to the madness."

For what it's worth, Obama seemed pleased with Wiley's final "man-of-the-people representation" of his presidency.