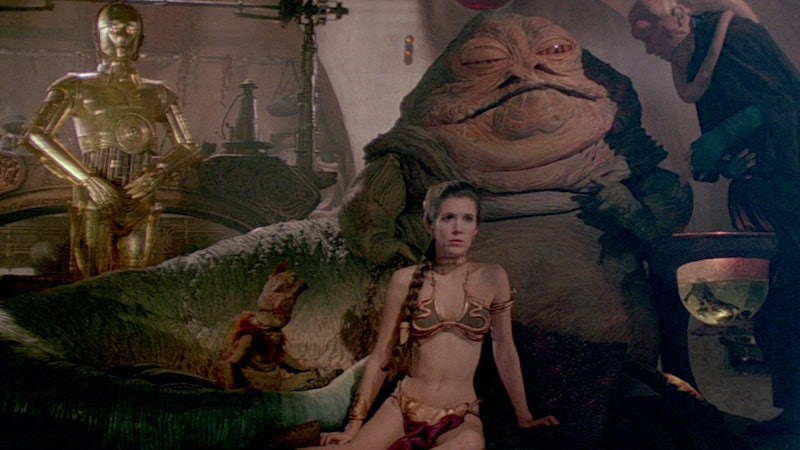 One of sci-fi's most beloved actors, best known for her role in Star Wars as Princess Leia Organa, has died. On Thursday, at the age of 60, Carrie Fisher passed away. (Family spokesman Simon Halls confirmed the death via People.) As we mourn the passing of the talented actor, writer, and outspoken feminist, memories of Fisher's witty, self-effacing nature will surface, but there's one quote in particular that highlights her brilliance. It's a quote about Leia's iconic gold bikini. Anyone even remotely aware of Star Wars' existence has either seen, heard, or fantasized about the costume. Despite the fact that Leia was a seminal sci-fi character, the actress has been fielding questions about her sartorial choices for decades.

In a 2015 interview with The Wall Street Journal, Fisher was asked about the two piece from Return of the Jedi. Specifically, what her opinion was on banning merchandise that featured Leia in the get-up. Her response was a take back on the incessant critiquing of Leia's clothes — or lack thereof. She said, "To the father who flipped out about it, 'What am I going to tell my kid about why she’s in that outfit?' Tell them that a giant slug captured me and forced me to wear that stupid outfit, and then I killed him because I didn’t like it. And then I took it off. Backstage."

The ongoing backlash about Leia's famous gold 'kini resurfaced after Fisher interviewed Daisy Ridley for Interview magazine. She told her "Don't be a slave like I was" and "You keep fighting against that slave outfit." Knowing Fisher's tongue-in-cheek, candid interview style — and given the casual manner of the interview — the quotes weren't meant to be taken so seriously.

Less than a few weeks ago, the Star Wars standalone film, Rogue One, starring Felicity Jones premiered. Before that, Star Wars: The Force Awakens starring Daisy Ridley hit theaters. Both films featured a strong female lead. Though neither of them ever donned a gold bikini, their characters were fearless and autonomous. It's fair to assume that they might not have been given these opportunities if it wasn't for Fisher's Leia. Because of Fisher, women in sci-fi are allotted the ability to take their "stupid outfits" off. Or never put them on in the first place.

If you look closely, the truth is clear. Fisher and Leia were never slaves. They were revolutionaries.