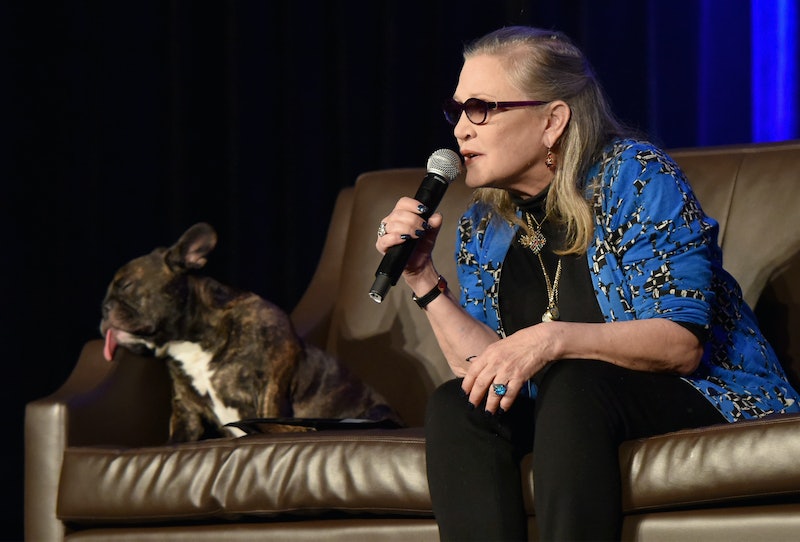 Carrie Fisher may have played a badass on screen. But in real life, the actress truly did struggle. After the first Star Wars movie shot to prominence in 1977, she found herself battling bipolar disorder, drug addictions, and all the horrors that often come with such instant fame. And yet, despite her many demons, Fisher became a mental health advocate, author, speaker, and spent decades shedding light on the darker side of life.

And thank the heavens she did, too. Fisher's openness about her mental illness helped to lessen the stigma that often surrounds, well, pretty much every disorder out there. It also showed that — even with her addictions and mental health issues— it was still possible for her to get sh*t done.

That's why I love her quote, “There is no point at which you can say, 'Well, I'm successful now. I might as well take a nap.'” Fisher wrote this in her 2008 memoir, Wishful Drinking. Her sentence can mean so many things, and depending on how you apply it, should really be everyone's new life motto. (I know it's going to be mine.)

“There is no point at which you can say, 'Well, I'm successful now. I might as well take a nap.'”

Fisher was such an inspiration — and apparently anti-napper — that Harvard University recognized her contributions to society by awarding her with the Outstanding Lifetime Achievement Award in Cultural Humanism in early 2016.

If you haven't read it yet, check out her 2008 memoir Wishful Drinking for more inspirational quotes. Fisher was a huge advocate for never giving up, and it really did show throughout her amazing life.

The actress will truly, truly be missed. But I'm sure no one will ever forget her wise words.

More like this
Ashton Kutcher Opens Up About His Battle With Rare Autoimmune Disorder
By Radhika Menon
'It’s A Sin's Real-Life Jill Has An Important Message About Monkeypox
By Sam Ramsden
'Stranger Things' Star Jamie Campbell Bower Reflects On Being Sober For Over 7 Years
By Radhika Menon
At 14, Rachel Sennott Had A Sexual Awakening While Reading 'Twilight'
By Samantha Leach
Get Even More From Bustle — Sign Up For The Newsletter