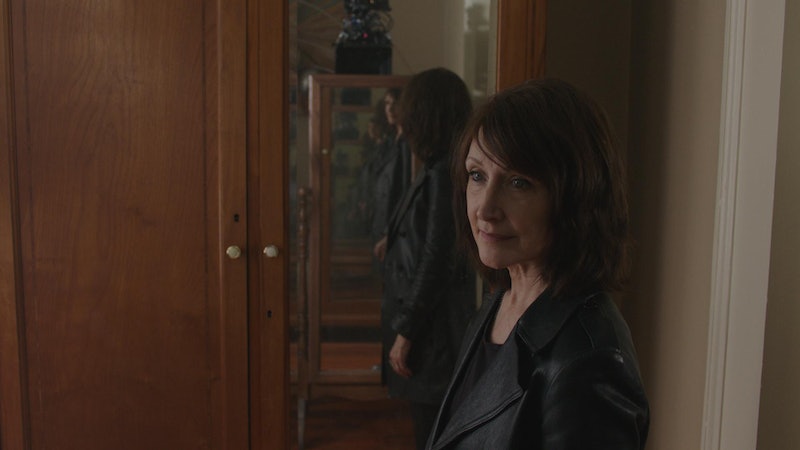 In the dark, metaphysical noir Out of Blue, in select theaters and available on demand on Mar. 22, Patricia Clarkson isn't the hardened Missouri belle of Sharp Objects nor the permissive dream mom of Easy A. The Golden Globe and Emmy-winner leaves expectations behind in her role as Mike, a homicide cop as austere and no-nonsense as her name. The film divided the audience when I saw it last year at the Toronto International Film Festival, and critical consensus is falling right down the middle too, according to its Rotten Tomatoes score. But when I sit down with Clarkson and writer/director Carol Morley the day after its TIFF premiere, it's clear that they weren't toiling to make something easily accessible to a broad audience.

"I wrote the character not to be instantly likable," says Morley, who also directed The Falling and Dreams of a Life. "Mike’s a very complex character, and I thought Patricia would be amazing at bringing such complexity to life."

Fitting for the smokey, alpha-female feel of the film, the two women first talked about the project at length over bourbon and whiskey. And though she says she's "not Mike externally," Clarkson did get the feeling that the self-sufficient investigator was inside her somewhere. "I want to believe that every character has to exist within us in order to play it," she says. "So it was just an aspect, a facet of me that I hadn’t used as an actor and that’s always maybe what we want, what we’re looking for."

The plot — a lax adaptation of Martin Amis's novel Night Train — kicks off in earnest when an astrophysicist played by Mamie Gummer, is found shot dead in her office. As Mike becomes immersed in Jennifer's life and her life's work of studying of black holes, the detective begins to lose herself in the mysteries of the cosmos — like matter being pulled by gravity over the event horizon.

"As an actress, I’ve played so many things at this point, but so often the characters I play are defined by a husband, a child, a partner," Clarkson explains. "The beauty of this very solitary, insular woman, was challenging, and I wanted that challenge. I wanted a woman that was unadorned, no frills, no fuss."

Indeed, Mike will remind you of the many, many male iterations of the stoic detective character who doesn't let the fact that his life is in a shambles get in the way of pursuing a lead. That's very much intentional — Mike is also a woman in Amis's book — and Morley uses our shared understanding of noir tropes guide the film.

As unemotional as Mike herself seems to be, Clarkson says that she and Morley approached her "in an emotional way, not in an intellectual way, which I think was just right." Like all tortured fictional detectives, Mike has a past, though it would be considered a spoiler to reveal just what that is. Unpacking that was the key to finding the character.

"I think the emotional life of a character is something that, if you don’t have it, you’re going to be caught with your pants down," the actor says. "And no director, no [other] actor can help you. So I had to lay the groundwork of Mike, and I think, the despair and the sadness that lives just below the surface that she’s buried for years and years and years."

Each character is grounded in the genre and in their own storyline, but Out of Blue can't possibly answer the higher level questions that it presents. It's those mediations on what life means if you're just a speck of dust in a limitless world that both women hope audiences will still be pondering long after they leave the theater. In Clarkson's mind, "we must question our place in the universe, particularly now as the world seems to be on fire." Morley, for her part, says that she previously didn't know "that we are all stardust," but that she finds the connection "really comforting."

And while Mike and Out of Blue might not be every audience's cup of tea, Morley and Clarkson will settle for provoking a little thought. Before our conversation ends, the filmmaker recounts a conversation she had with a festival goer at the premiere after-party that exemplifies the movie's slow burn.

"They said at the beginning they didn’t like Mike, and as it went through, they started to feel guilty that they didn’t like her, then by the end started to empathize with her. And I thought, 'that’s a beautiful thing,' because if Mike’s immediately available to you, well she isn’t to herself, so it would be strange," she says. "I hope there’s a sense in [people who've seen the film] that there are hidden depths to us all and to yourself. And you can search for them and not be afraid."