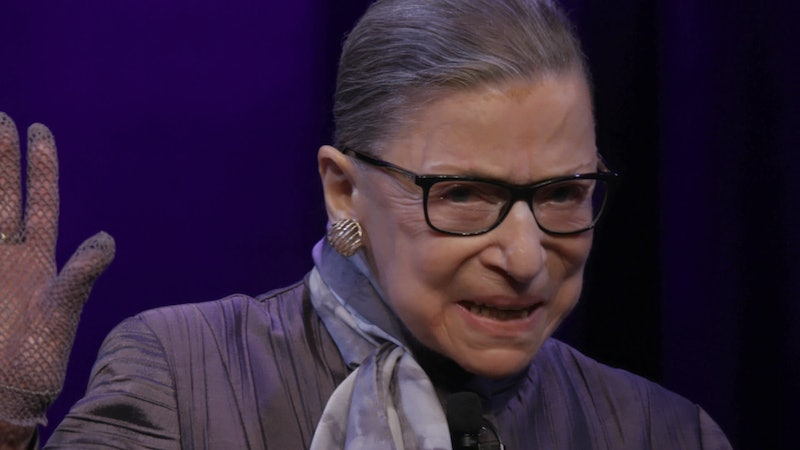 Every woman has their own way of resisting, fighting for what they believe in, or breaking down systemic oppression. Toppling the bricks of patriarchy might take one intense hit by a big wrecking ball, or it might make more sense to dismantle them one by one. Supreme Court Justice Ruth Bader Ginsburg is a brick-by-brick kind of woman, say Betsy West and Julie Cohen, the directors of the documentary RBG, which is available digitally now.

As the film shows, Ginsburg has utilized a specific methodology when it comes to arguing cases of sexism and discrimination throughout her legal career, and her approach to achieving equality for women has been to fight one small, smart, and level-headed battle at a time in order to win the big war. It's not an approach that will work for everyone, but her tactics might just offer another angle to take as we dive further into our feminist fight.

"Every time you meet a sexist man out there, think of him as a kindergartener who needs to be schooled," Cohen says, summing up Ginsburg's method. The directors and I speak over the phone in late October after a tumultuous few months for women, including watching a man accused of sexual assault being confirmed to the Supreme Court. Though the judicial branch may be changed for generations, RBG opts to highlight just how much Ginsburg has done for women's equality over the course of her career.

As the filmmakers listened to her oral arguments from when she was a litigator in the '70s and heard some of the more egregious examples of condescension and sexism that Ginsburg faced when she was trying to argue these very important cases, they were baffled. "It was like, how did she put up with it? How did she not just lose her temper?" says West.

According to them, Ginsburg's rule was to "never respond in anger." She approached every case like she was teaching a child, a kindergartener, that discrimination against women actually exists. She changed the world for women one argument at a time, and dismantled discrimination through individual cases, rather than via one giant cause. "To me, that just says so much about her very practical approach," adds West. "It doesn’t work to get angry at the justices, you have to meet them where they are intellectually and teach them. And that’s how she won. By being super smart and strategic."

"She’s a great role model for women," Cohen says, though she understands that holding back our female rage and political anger is incredibly difficult nowadays. Ginsburg's approach, she says, "Is aspirational, because maybe you’re so angry that you can’t do that. But that worked well for her."

Indeed, it has. As the film details, Ginsburg won five out of the six cases she brought before the Supreme Court, and as a Justice she has heard some of the most important cases for the history of gender equality, including those for abortion rights and against gender discrimination.

Ginsburg's "slow and steady wins the race" approach might be comforting to those who see our feminist fight as a long-term, ongoing battle. "We began this film in 2015, which seems like a long time ago, before #MeToo, before Times Up, and obviously before the change in our political atmosphere," says West. At the time of making the film, during the time of the presidential election, West found it reassuring to be documenting the life of such an extraordinary woman and seeing what one woman did to change the world for the rest of us and remember how far we've come.

"Obviously to experience what we have in recent months can be upsetting, but I do find a lot of inspiration in Justice Ginsburg's approach and determination to fight for what is right even when the chips are down, as they certainly appear to be. So I find that very inspiring," she says.

"There are no women who haven’t faced a fair amount of sex discrimination in the professional world, or if they haven’t, they’re probably not remembering fully," adds Cohen. "Ruth Bader Ginsburg’s example of continued ongoing and strong persistence and determination in the face of sexism and any other obstacles that came her way is absolutely an inspiration to try to fight off whatever kind of obstacle one is facing, particularly gender-based obstacles."

Whether those obstacles come in the form of condescension, dismissal, or outright harassment, "Following an example of continually fighting back is a good way to go," Cohen says.

So take heart, fellow resisters, and take a page out of Ruth Bader Ginsburg's playbook. We might have to do it one brick at a time, but the wall is going to come down.