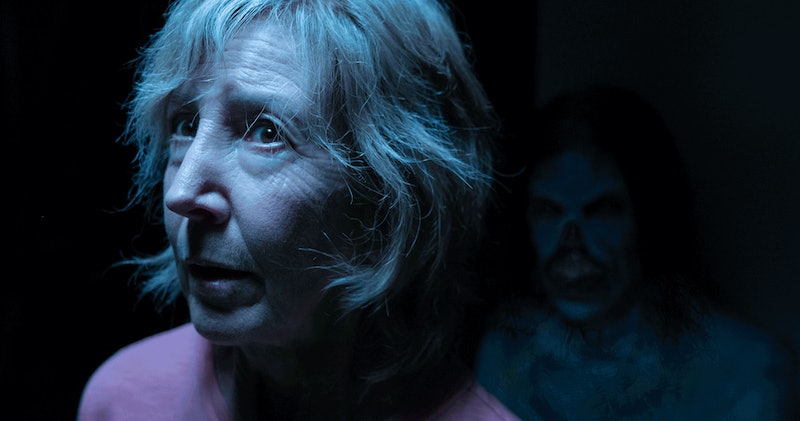 Horror fans can breathe a sigh of relief. After being bumped from its original October spot, the latest film in the Insidious series finally comes out Jan. 5. Expectations are high that this entry will unlock the mystery of the spirit realm at the series' heart, The Further. But with a strong horror pedigree and a tagline promising "Fear Comes Home", how scary is Insidious: The Last Key, really?

Well, that partly depends on what scares you. The writing/directing team behind the Insidious films, Leigh Whannell and James Wan, are better known for their first franchise, Saw. The gore-filled movies were a huge hit among horror fans, with Whannell and Wan getting lumped into the "splat-pack" of torture-porn filmmakers. Wan in particular was quick to refute the label, telling DownRight Creepy, "the first [Saw film] that I made was a pretty low key, it was a very visceral film but also more psychological, so I always try and point that out." Still, that film got an R rating for "strong, grisly violence", and it's definitely not for the squeamish.

Which was never Wan's goal. In the same interview, he said the studio strong-armed him into making an R-rated film for his next feature as well, when what he really wanted was to make something PG-13 — more accessible but just as scary, without the crutch of violence. Wan pointed out, "but of course the film comes first and the rating ultimately kind of follows it... I don’t think that Insidious really crosses any of those lines, though I’ve heard many say this is the most frightening PG-13 film."

Insidious was Wan and Whannell's chance to focus on the ominous, psychological horror they were interested in, with the added bonus of keeping them from being pigeonholed as gorehounds. Wan told The Film Stage, "I made Insidious to prove to people it’s still possible to make scary, suspenseful movies without blood and guts. And that was really my aim as a director, to make a movie that was consciously in that world." Mission accomplished, as all the Insidious films including The Last Key are PG-13, and still made top 10 lists of the decade's most frightening films.

The Last Key is the franchise's fourth film, but the second chronologically. This lets the series' unlikely hero Dr. Elise Rainier, killed at the end of the first film, continue participating without the limitations of the spirit realm (when dealing with ghosts, characters are never really gone). Elise shouldn't be an anomaly, but older, female, central characters, especially ones with expertise and authority, and especially in horror, are a rare breed. Elise is a reluctant parapsychologist who, over the course of the series, helps the Lambert family and comes out of retirement, despite suspecting (correctly) it will lead to her demise at the hands of an evil spirit gunning for her life energy.

The Last Key appears to be a a direct sequel to Insidious 3, which focused on Elise's earlier life before she met the Lamberts. Depressed after her husband's death, Elise suppresses her supernatural talents. But when she comes across the Brenner family, she steps up to help their possessed daughter by battling a vicious entity, rediscovering her powers in the process.

In an earlier interview with We Got This Covered, Whannell (who also plays Elise's assistant Specs in the film) said of The Last Key's story, "I’d like to explore the time between [Insidious 3] and the first film. That whole area there where Elise has rediscovered her gift, I think you could have a lot of adventures before she arrives...We’ve kind of established Lin [Shaye] in this particular film as kind of this superhero, so that would be kind of interesting to explore in the other films."

We already know Elise makes it to the events of the first Insidious, and we already know how and where she dies, which mutes some of the film's suspense. But the genius of Wan and Whannell is their slow-paced burn, building terror through sound, anticipation, and hauntings as emotional as they are literal. By giving us a character to care about, and placing her in a vulnerable position, the fears of The Last Key run deeper than just jump-scares. With Elise returning to her own childhood home to grapple with her own all-too-real demons, The Last Key promises to be the series' most chilling entry yet, all by replacing horror with heart.