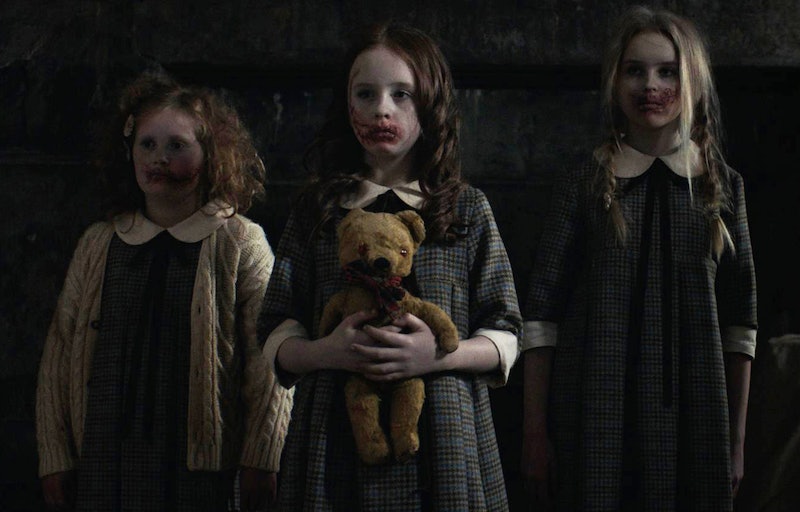 Netflix original Malevolent follows a group of college kids swindling grieving families by performing fake paranormal house cleansings, which they claim free the spirits of trapped loved ones. Spoilers ahead. Led by aggressive older brother Jackson (Ben Lloyd-Hughes) and centered around his sister Angela's (Florence Pugh) "psychic talents", the team takes a job at the site of a notorious and brutal crime, despite Angela's reservations. When they arrive, their planned schtick of recorded wails is thrown off by increasingly disturbing interruptions. So how scary is Malevolent compared to other films about psychic investigators? The most frightening element isn't haunting, it's being haunted.

Angela's ambivalence towards their entire scam, which also ropes in Jackson's girlfriend to record sound, and film student Elliot manning the camera, is offset by her and her brother's need to make money for very different reasons. If you're wondering what two Americans are doing in England, they moved there for a fresh start, and as Jackson tells Angela early on, fresh starts don't come cheap.

The lynchpin of their scam is also the siblings' tragedy — their mother was a well-known psychic who ended up clawing her eyes out before killing herself, unable to handle what she saw. As Jackson mercilessly takes advantage of vulnerable relatives looking for closure, Angela begins to fear she's actually inherited her mother's psychic abilities... or just her psychosis. When they're offered a job at the Green orphanage, site of horrific multiple child murders, Angela turns it down outright, but her brother needs the money. Though the film's oblique about it, it's clear he's gotten in deep with the wrong people and owes them money.

For people preying on the loss of others, Angela and Jackson are keenly aware of what loss means. Despite Jackson's pushy ambition and sketchy behavior (including pill-popping) and Angela's increasing stubbornness and paranoia, they're each all they have left in the world. So when Jackson says his creditors will kill him if he doesn't pay them back, Angela faces what she's most afraid of within herself to help.

Jackson, constantly listening to self-help tapes about the power of the mind and refusing to acknowledge any possibility of real supernatural activity, might be doing his own overcompensating for the same. He sees his mother's suicide as personal weakness and despises her for it, making it easy for him to justify bilking people who actually fall for the scam. His pill habit, logic obsession, and determination might be cover for the same fears as Angela — that he's more like his mother than he wants to believe.

When the crew steps into the gloomy mansion, they're bringing as much history to the situation as the situation's presenting to them. The orphanage was the prison and staging site for a serial killer who stitched shut the mouths of his foster sisters, keeping them alive for months before arraying their bodies on the front lawn. The person requesting their help is his mother, Mrs. Green. The screams of the girls torment her, and she grieves for her son as well. But as the crew begin their "investigation", they discover darker and disturbing facts about the situation, as Angela begins seeing the girls.

An old, dark house with labyrinthian hallways and child ghosts are matched with the horrors of everyday bodily injury in this ghost story. Despite most of its creepiness centered around not being able to trust your own mind, if you're easily spooked or blood-squeamish, Malevolent will have you sleeping with the lights on.