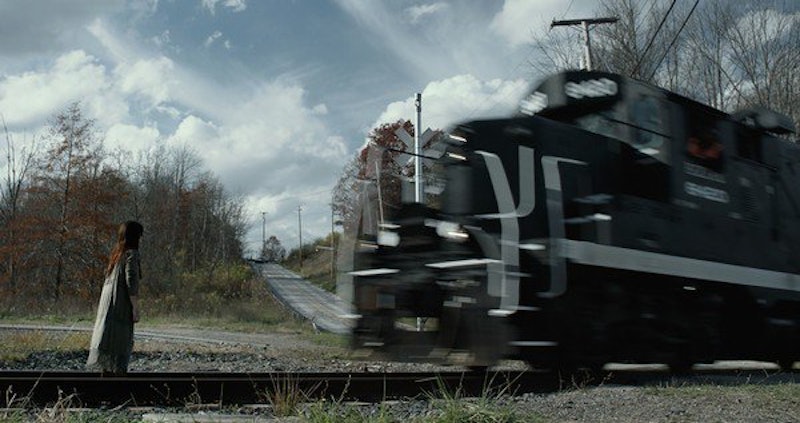 Last year was one for the record books when it comes to horror movies. Well, it would have been anyway if there were any record books that keep track of these types of things, but what I'm saying is it seemed like 2016 had a lot of good horror movies. And thankfully for fans of the frightening, 2017 appears to be picking up right where last year left off with lots of horror films on deck. One of the first up is The Bye Bye Man, but will it live up to last year's legacy? How scary is The Bye Bye Man?

The film sounds like a good, old fashioned boogeyman movie — but with an interesting twist. Taking a cue from legendary supernatural killers like the Candy Man and Bloody Mary (both of whom have starred in their own movies in the past), The Bye Bye Man is a malevolent spirit who shows up to kill you if you say his name (no mirror needed). However, here's where he differs from his predecessors: In addition to The Bye Bye Man showing up when he hears his name said allowed, a person just thinking his name will also allow him to manifest. And since it's almost impossible to control your thoughts, that means The Bye Bye Man could always be lurking.

Another frightening aspect about the way The Bye Bye Man works is his ability to possess other people to do his bidding. Thanks to this ability, you never know whom you can trust as long as he is around. Your best friend, your lover, your mom — anyone could be The Bye Bye Man. He could even possess you.

Finally, the third terrifying part of the film is the appearance of The Bye Bye Man himself. Seemingly taking inspiration from both modern horror legends like Slender Man and classic ghouls such as the Grim Reaper, the character is pretty horrifying to look at, and he may very well end up being remembered as an iconic movie monster when it's all said and done.

2017 will likely be another great year for horror movies, and The Bye Bye Man is a big reason why, as the movie's fresh spin on the boogeyman should make for one scary experience.