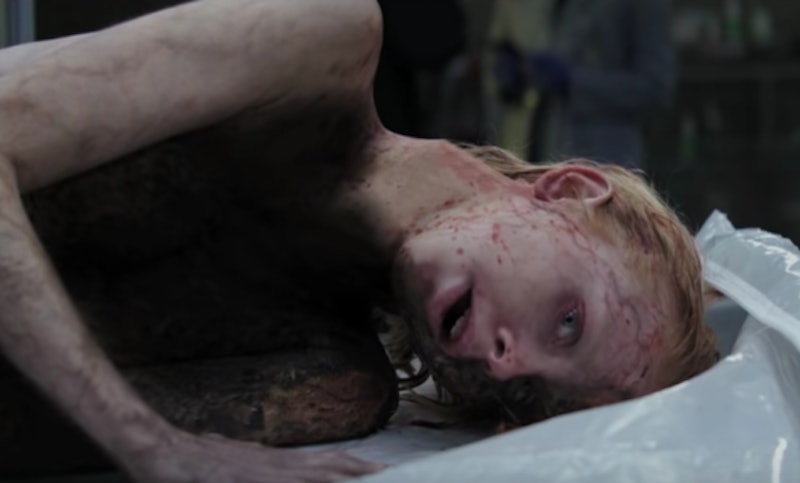 When it comes to horror movie subjects, there's one that has remained consistently scary throughout the years: demonic possession. Ever since 1973's The Exorcist — still considered by many to be the scariest film ever made — movies about demons and devils possessing innocent people have continued to reliably terrify audiences on a regular basis. The latest is The Possession of Hannah Grace, starring Shay Mitchell, and it definitely looks like it's ready to stand alongside The Exorcist and other demonic horror films in the scary movie hall of fame. But just how scary is The Possession of Hannah Grace?

If movies with demonic possessions scare you, then you might want to steer clear of The Possession of Hannah Grace. The new film looks quite terrifying, as it offers up the usual thrills and chills associated with the genre, but with some added new elements that make it extra creepy. The plot of the film is as follows: Mitchell portrays Megan Reed, a former cop freshly out of rehab who's looking for a new start. She takes a job in the overnight shift at a hospital morgue, and one night a fresh cadaver is brought in; Hannah Grace, a woman who died during an exorcism gone bad. Alone with the corpse in the morgue for the night, Megan begins noticing that whatever possessed Hannah's body may not have died when she did.

By combining the typical contorted body horror and hellish imagery of Exorcist-style films with the added element of being alone and trapped with the possessed, The Possession of Hannah Grace really takes the genre in a frightening new direction. And to make matters even more frightening, there's even a little bit of real life horror involved, too. While the movie isn't based on a true (or purportedly true) story, it does feature a detail that could have been ripped from the headlines. Now before you panic, there are no accounts of anyone ever being stalked by a possessed corpse in a morgue. But there have been instances where people have died during attempted demonic exorcisms.

Perhaps the most notorious of these deadly exorcisms was the exorcism of Anneliese Michel. A German woman, Michel died at the age of 23 in 1976 following an attempted exorcism. She suffered from a number of diagnosed mental conditions from age 16 on, but as her condition failed to improve despite medication, her family sought an exorcism. She died as a result of routinely being denied food and water during the 10-month-long exorcism, and her parents and the performing priest were all tried and found guilty of negligent homicide. The film The Exorcism of Emily Rose is based on her case. Another tragic exorcism is the Tanacu exorcism of 2005, where a young Italian nun named Sister Maricica Irina Cornici was killed by a priest and fellow nuns as they attempted to perform an exorcism on her. She was tied to a cross, gagged, and denied sustenance for three days, at which point she died.

The dash of realism — knowing that some people really have died from exorcisms — coupled with the themes of demonic possession and isolation all come together to make The Possession of Hannah Grace one of the scariest films of the year.