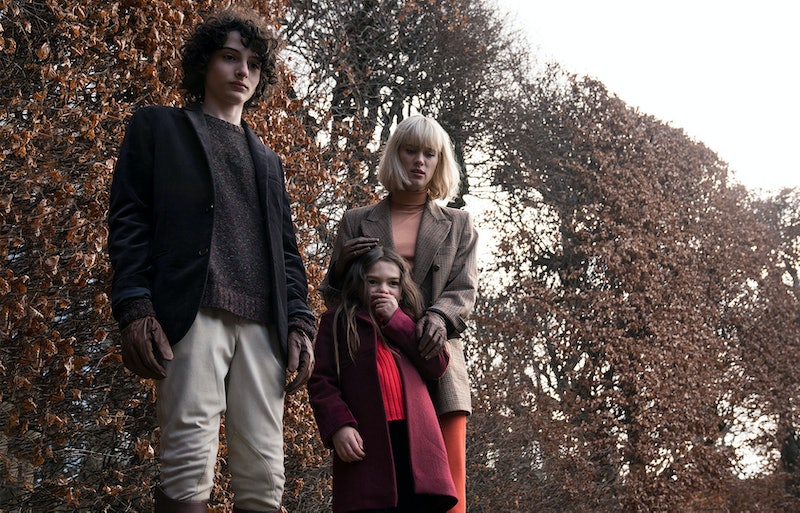 Finn Wolfhard has battled The Demogorgon on Stranger Things, fought an evil clown in It, and is set to deal with ghosts in the upcoming Ghostbusters: Afterlife. But all of those threats may pale in comparison to whatever dangers are lurking in the young actor's new horror movie, The Turning. So just how scary is The Turning compared to the rest of Wolfhard's spooky résumé? Well, for starters, the movie has a whole lot of history behind its horror. As in, over 100 years of history.

The film is a reimagining of Henry James' classic novel The Turn of the Screw, which was first published way back in 1898. The Turning updates the setting from 19th century England to 1990s Maine, which gives the story an added undercurrent of creepiness thanks to Stephen King routinely setting his stories in the sparsely-populated New England state for the past 40 years. Here's the film's official synopsis from its website:

For more than 100 years, a deeply haunting tale has been passed down to terrify audiences. DreamWorks Pictures’ The Turning takes us to a mysterious estate in the Maine countryside, where newly appointed nanny Kate is charged with the care of two disturbed orphans, Flora and Miles. Quickly though, she discovers that both the children and the house are harboring dark secrets and things may not be as they appear. Inspired by Henry James’ landmark novel, the haunted-house thriller is directed by renowned visualist Floria Sigismondi.

At its core, The Turning is a haunted house movie. That means you should expect themes of isolation, lots of tension-building, and — especially if the trailer is any indication — a significant number of jump scares. But it's not just a haunted house movie, as the film also includes elements of psychological horror. In the trailer, it's not clear to either the audience nor to Mackenzie Davis' nanny protagonist what's real and what's imagined. And to top things off, the film has the always appreciated addition of not just one, but two very creepy kids.

Adding to the film's potential terror is the talent behind the camera. The Turning's screenplay was written by Chad and Carey Hayes, a sibling duo who are perhaps best-known for writing the very scary haunted house films The Conjuring and The Conjuring 2, so they certainly know their way around this type of movie. The film's director is Floria Sigismondi, who may have less straight horror experience than the film's writers, but her potential for navigating scary content and creating dark atmospheres should not be underestimated. Sigismondi has directed episodes of two of television's most consistently-disturbing series — The Handmaid's Tale and American Gods — and she's also worked extensively with ultra-creepy rocker Marilyn Manson.

If you've read The Turn of the Screw, then you should have a pretty good idea of where this film's story will likely end up, but said plot won't be spoiled here. Suffice it to say if the film sticks to the main story beats of the book, then viewers should expect a very scary — and tragic — ride indeed.

With its combination of a classic ghost story for a plot, its fright-experienced talent behind the camera, and a star in Finn Wolfhard who has already made a killing in the horror genre before even being old enough to vote, it seems safe to say that The Turning looks to be one of the scariest films of 2020 — and it's only January.