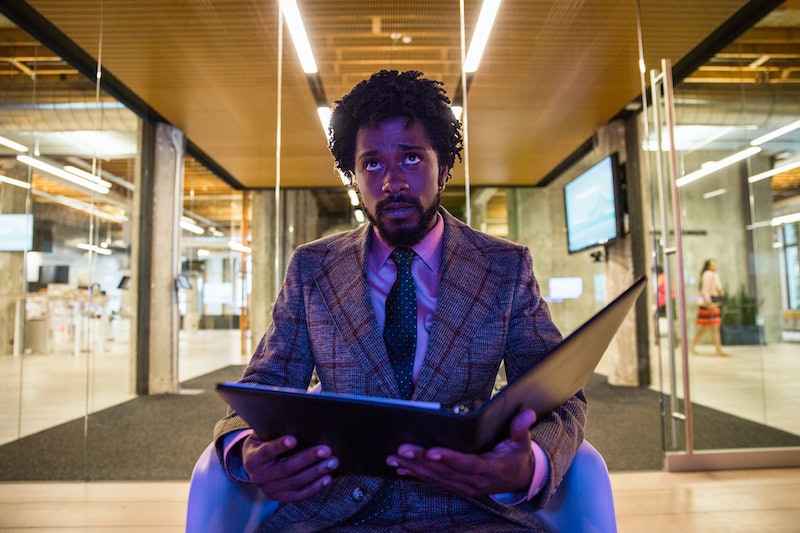 It's impossible to place the new film Sorry to Bother You in a box. It's a comedy, but also a science-fiction story, with a hint of horror and myth mixed in. One thing Sorry to Bother You is not, however, is a movie that takes place in a dark, depressing dystopian future. "This is a world that has joy in it," director Boots Riley says during an interview at New York's Crosby Hotel. "This is a world that has optimism in the fact that people are actually fighting and doing something." As such, it's important that audiences leave their theaters not so much worried about a dire future, but energized to go out and do something to prevent such a future. After all, Sorry to Bother You is the very definition of activist art: bleak enough to anger viewers, and hopeful enough to spur them into action.

Out now, the movie takes place in what Riley describes as "an alternative present," a place where economic disparity is so dire that one major company has formed WorryFree, essentially a voluntary indentured servitude complex that trades lodging, food, and clothes in exchange for free, unlimited labor. It's a bleak reality in which the only bright color comes from art and the ability to protest.

Sorry to Bother You recognizes, however, that the ability to strike is not just a right, but also an economic decision. In the film, Cassius Green (Lakeith Stanfield) finds himself stuck between wanting to protest against his telemarketing company with his fellow employees and committing to that very same company after he's offered a huge promotion that could save his uncle from selling his life to WorryFree. Spoiler alert, he ends up selling out; Cassius uses his "white voice" to become a power caller, which requires him to sell WorryFree labor to massive companies as a telemarketer. "It was his only option in his world, just like it's our only option in our wold," Stanfield says now.

The struggle between activism and money is crucial to the film, and it extends beyond Cassius' decision to ditch the strike in favor of a more prosperous future. Detroit (Tessa Thompson), his activist girlfriend, faces a similar dilemma when she decides to sell her Africa-inspired art and use her "white voice" to do it. To spread the important message in her art, Detroit must participate in capitalism (a white male dominated system) that could, essentially, make her art unattainable to people of color. It all boils down to this question: can commercial art — art that is bought and sold — be a form of activism even though it is a part of this capitalist system?

Riley acknowledges that he himself faces this same dichotomy, as tickets to Sorry to Bother You cost money, thus limiting its potential audience. "Karl Marx sold books," the director acknowledges. To make substantive change, he continues, one has to work within the system, even if the end goal is to overthrow it. "The real thing that has to happen is organizing on the job... that’s the next big step to being able to actually have social change," Riley says. "[That's] change that actually changes, that affects the material conditions of people."

Stanfield agrees, saying that movies have the ability to motivate an audience to be "a part of conversations they may not have wanted to engage in." Every role Stanfield takes on, he adds, is a form of activism. "All the stuff that really moves me — I really feel like it is activism for me," he explains. "Because it makes me feel empowered to go out and make change in my society."

If Sorry to Bother You can inspire audiences to take action, then it will have succeeded. If not, then Riley warns that the dire economic setting of the film will forever remain as relevant as it is today. "[The movie] is talking about what’s happening right now. It’s also talking about what was happening 10 years ago. And what, unfortunately will be happening 10 years from now unless some sort of big thing happens," the director says.

As a piece of activist art, Sorry to Bother You is doing its part to help make that "something big" happen, even if it's just at one ticket at a time.