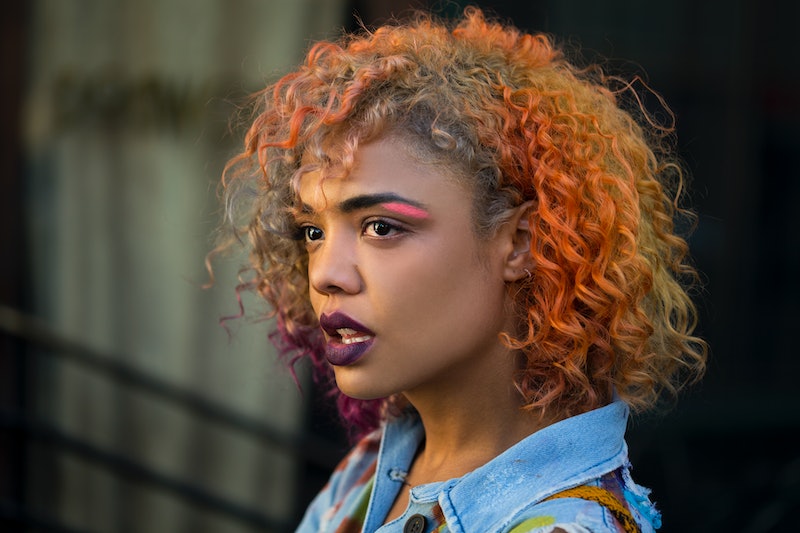 Tessa Thompson is doing a lot of things she never thought she would do. Because of her identity as a mixed-race woman, the Thor: Ragnarok scene stealer never thought she'd be a movie star, let alone take on a magical realism film like her newest project, Sorry to Bother You. "There's so many films that I love that hang out in that space, and for whatever reason there are just not a lot of black and brown people in those spaces," Thompson explains during a recent interview at New York's Crosby Street Hotel. "I just sort of felt like maybe I would never get to make a film like that."

Until, that is, first time writer-director Boots Riley came along with Sorry to Bother You, in theaters July 6. Thompson, who calls this film "a little dream come true inside of my career," jumped at the chance to play Detroit, a performance artist and outspoken activist who's not pleased when her boyfriend Cassius Green (Lakeith Stanfield) uses his "white voice" to become an elite telemarketer making money selling cheap goods to wealthy companies. Though it is colored by touches of science fiction and magical realism, at its core Sorry to Bother You is a movie about capitalism, privilege, race, and the working class.

"People wanna see that... you can talk about racism or class — or, you know, any of those hot topics — that you can talk about them in new ways," Thompson says. "For whatever reason it feels like us people of color are excluded from those narratives."

For Thompson, Sorry to Bother You was both an opportunity to bring artists of color into the space of magical realism in Hollywood and a way to help expand the industry's idea of what it means to see representation on screen. "I also hope that... when we talk about diversity, that we also talk about diversity of ideas, diversity of thought, diversity of the kind of content that we put out," the actor says. "That’s the space that I hope we get into and I think, truthfully, films like Sorry to Bother You usher us into that space cause it’s an all-cast of color but it’s unlike a film that you’ve seen before in those spaces."

Sorry to Bother You takes place in an alternative present, one where unemployment and consolidation of wealth has gotten so bad that people are voluntarily signing lifetime contracts with WorryFree, an organization that trades housing, food, and clothes for unlimited (and cheap) labor. It's not just about economic injustice, it's a call to arms — a call for activism. Detroit answers that call primarily through her art, but eventually finds herself bending to the will of the elite in an effort to further her career as an artist over her morals as an activist.

"One thing that I thought was so interesting with Detroit — and I think this is sort of the double-edged sword in a way of being an artist of color — is sometimes you can hit a point where... the people that are ingesting your work, or that you get to make work with, are actually not in your community as much," Thompson explains.

Like Detroit, Thompson wants to use her art as a form of activism, and while not every movie she makes has such an overt political message, they tend to all share a theme of increased representation. "For me, the reason why that's significant is there's young girls that get to see themselves on screen — finally — and that's significant," the actor says. "It's significant if a woman like me gets to lead a big tentpole movie."

Although her Valkyrie stole every scene in last year's Thor: Ragnarok, Thompson never saw playing a superhero warrior in her future "because of the opportunities that I saw provided to women like me." Women of color, she goes in to explain, have rarely led action films in roles that don't revolve around being "the sex symbol."

In fact, Thompson herself is one of only three women of color superheroes in the MCU — the other two being Guardians of the Galaxy Vol. 2's Zoe Saldana (Gamora) and Pom Klementieff (Mantis) — and none of them are the leading superhero in their respective films. It's also worth noting that superhero movies featuring women of color in prominent, super-powered roles like Deadpool 2, GOTG, and Ragnarok, were all released within the last two years, and, again, Deadpool 2 and Ragnarok are the only films mentioned in which the female superheroes are not also love interests for the male lead.

Thompson is determined to see more change made in that realm, though, and that's done in part by her taking on more prominent, mainstream roles. In the world of Sorry to Bother You, the actor's jump from independent cinema to blockbuster movies might be considered a form of selling out, but there is one crucial difference between how Cassius gets ahead and how Thompson's career continues to grow. To move up the corporate ladder in Sorry to Bother You, Cassius must use his "white voice," disguising his real identity to make more money. Thompson, on the other hand, isn't interested in hiding who she is.

With her growing role on HBO's acclaimed Westworld, the highly-anticipated upcoming sequel Creed II, and the sure-to-be huge Men In Black spinoff movie co-starring Chris Hemsworth coming up, Thompson is making sure that audiences of all colors, backgrounds, and sexes see her for who she really is. Not as a diversity chip or just a love interest or an indie actor or an action star, but as an actor of color who gets to decide for herself what she wants that to mean.