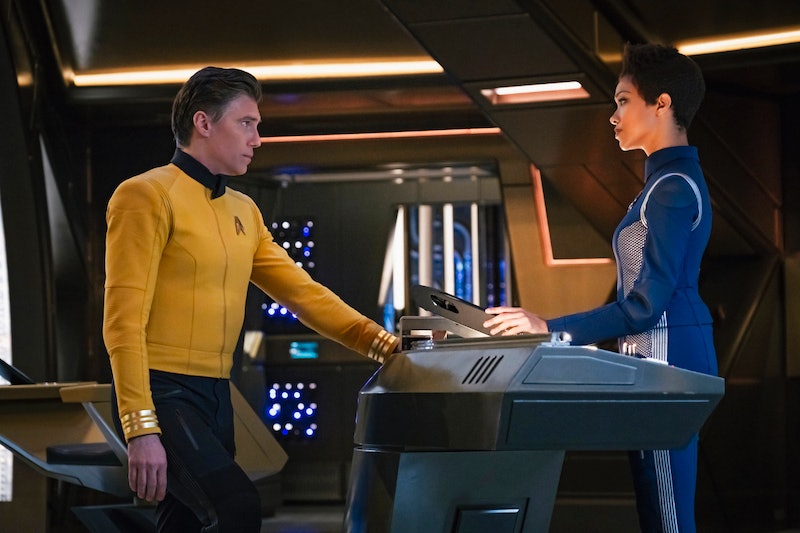 When Star Trek Discovery was first announced, fans wondered how the new series was going to fit into the centuries-long canon of the many shows and movies that have come before. It seemed inevitable that the U.S.S. Discovery might one day interact with the starship Enterprise, given that it's set about 10 years before the original series. While the show used Season 1 to establish its own ship, characters, and conflicts, the Discovery Season 2 is fully embracing its Star Trek roots. With new characters (which are really old characters) and a visit from the Enterprise, Season 2 is fully diving into its namesake and embracing what the rest of the canon has to offer.

The final moments of Season 1 saw the Discovery crew answering a distress call from the U.S.S. Enterprise. Season 2 finds the crew dealing with the aftermath of the Klingon War, as well as investigating seven mysterious red lights throughout the galaxy, tied to something known as the Red Angel. In addition to bringing the beloved Enterprise into the show's fold, the new iterations of old characters include Enterprise Captain Christopher Pike, played by Anson Mount, and a young Spock, played by Ethan Peck, grandson of legendary actor Gregory Peck. At a press event back in October, during which showrunner Alex Kurtzman assured us that Discovery will sync up with canon by season's end, Peck and Mount discussed their hopes and fears of playing well-known characters, while the rest of the cast previewed what's to come in Season 2.

Peck probably has the heaviest burden resting on his shoulders. By taking on the role of Spock, played for decades by the legendary Leonard Nimoy, then in the rebooted movies by Zachary Quinto, Peck is the third actor to put on the pointy ears, and he feels the pressure, especially given Star Trek's fervent fan base.

"It definitely frightens the heck out of me because I want it to be great," Peck tells Bustle. "It's such an incredible honor and it's taken some time to really begin to feel like I’m a part of it, just because it was such a daunting role... I wasn't sure that I would be able to do it. It's very surreal."

Unlike Quinto, who got to speak with Nimoy about the character and even share scenes with him, Peck didn't have that luxury, since Nimoy died in 2015. Peck says his version of Spock is inspired by the spirit of Spock in the original series. "What I mean by that is a great awareness of the emotional weather going on around him on the bridge and internalizing and then reacting logically. Very rarely do you see him react emotionally," he clarifies. "But obviously it's all done with great respect and reverence for what they did in the '60s with the original series, so that's the bench mark."

But don't expect his Spock to be the same as Nimoy's on TOS. "My Spock begins in place where you may not immediately recognize him because we had to start him some place to take him to readiness for Kirk, essentially for the Enterprise," he adds.

For Mount, the task might be a little bit easier, being that Christopher Pike isn't as iconic a Trek character as Spock, but he's still feeling nervous. "It's surprisingly difficult. I've never tried to establish a regular character in a second season of a show. It's a little bit like trying to put your Matchbox car on a electric track where all the other cars are like going full speed and you're trying to find a lane," Mount says. "But they are an enormously hospitable group of people and I am very, very, very much a fan."

Christopher Pike was the captain of the Enterprise in the original Star Trek pilot episode "The Cage." But the first pilot was rejected by the network, and the character was dropped, appearing in an amalgamation of footage in another episode later in the series. In the recent movies, Pike, played by Bruce Greenwood, is the one who convinces Chris Pine's Kirk to join Starfleet. Now on Discovery, Pike sits in the big chair on the Enterprise, and is years away from knowing Kirk.

Coming into Discovery, Mount felt his role was pretty clear. Showrunners Alex Kurtzman and Heather Kadin told him, "absolutely no questions asked you need someone who is the opposite of Captain Lorca. That's a lot of information just in one sentence," Mount says. "I had a lot to work with from there and combine that with the fact that he's one of the most decorated captains in Starfleet history."

Pike isn't just more laid back than Lorca, he's also more trusting in his knowledgable crew. "Pike is a different kind of captain than what we've seen before," Mount says. "Pike is the leader who realizes, OK, you know what? I’ve got 15 brains around me, why am I just using my mind? So he's willing to go, 'I have no idea what's happening. Does anyone have a better idea?' We've never really seen that before, and it makes the interplay on the bridge a lot more exciting."

Another original series character making an appearance in Discovery Season 2 is "Number One." In Star Trek's original pilot, Pike's first officer, his number one, was played by a woman, Majel Barrett, who went on to play Lwaxana Troi in The Next Generation. In the 1960s, it was a relatively revolutionary choice to cast a woman in such a high position of power. But unfortunately when the pilot was reshot, Number One was cut. Discovery is bringing her back, with Rebecca Romijn in the role.

"There's so little that you know about Number One, which is great because she's kind of a blank canvas," Kurtzman says. "She's clearly very competent, she's very strong, [Pike] relies on her tremendously, she knows what she's doing , and we built all of that into our version of her." Kurtzman and Kadin did add a few changes, however. "We added that she’s extremely resourceful, meaning she knows how to work the system in order to get what she needs from her ship and her crew and in some ways, while she's not the captain, we kind of think of her as one, she's very strong."

And as for the rest of the crew? Fan favorite Sylvia Tilly (Mary Wiseman) is evolving after temporarily living in the shoes of her Terran Empire alter ego, Captain Killy, and joining the command training program. Saru (Doug Jones) will return to his home planet of Kaminar to reunite with his sister. Ash Tyler/Voq (Shazad Latif) and Klingon Chancellor L'Rell (Mary Chieffo) are together on Qonos, but the trailer reveals that Tyler returns to Discovery. And somehowit sounds like couple Lieutenant Commander Paul Stamets (Anthony Rapp) and Dr. Hugh Culber (Wilson Cruz) will be back together again despite the fact that Culber is, well, dead.

"In nature, energy doesn't die, it just transforms," Rapp says. "One of the ways things are transformed in this world is through the mycellium. They’re part of the recycling; things decay and turn into something else. So that is the scientific basis on which anything that happens is inspired."

So Culber is going to be...recycled? Naturally the actors couldn't reveal much about Culber's return. "A good clue is we do find him where we left him and if you go back and watch Season 1, you'll understand what that means," Cruz adds. "What's really exciting for me this season is that what happened to this character last season is not just glossed over. There's no Band-Aid put on it like it never happened or going back in time or acting as if it never happened. There are real consequences to his death."

As for our main character, Michael Burnham (Sonequa Martin-Green) she's still dealing with the aftermath of her mutiny, trying to regain the crew's trust, and dealing with the feelings of abandonment she has after losing Ash, the first man she's ever loved. But the most complicated thing heading for her this season is her adoptive brother, Spock. "Burnham is caught in a very complicated relationship. That's a fact. I wish I could tell you why it’s complicated, but you'll find out soon enough. But a big part of the maturation that happened with Burnham over the course of Season 1 is the cost of arrogance and the cost of thinking that because you're trained in logic, you're right. That's not always the case."

Martin-Green asserts that Season 2 is "an exploration of science and faith." But with humanity still reeling from the Klingon War, "it's also deeply emotional, because we have a lot of deal with after that war. It's like to tornado ran through your home and you have to turn to your house and say, OK, so now we don’t have a roof, now there's flooding everywhere. OK, how are we gonna clean all this up? Do we wanna still live here?" she says.

And what of her mentor, or at least, the mirror universe version of her mentor, Captain Phillipa Georgiou, played by the magnanimous Michelle Yeoh? She's joining the secretive Section 31, Starfleet's black ops, an officially nonexistent defense and intelligence organization. "The Terrans are ruthless," Martin-Green says, but Burnham "felt that Georgiou deserved to have a second chance. She had earned it and deserved it to be in more nurturing environment and to see what that could do to her and how that could change her. I felt that it would give her a bigger better deeper life."

The inclusion of Section 31, along with the additions of Spock, Pike, and Number One are evidence that while Discovery has definitely carved out its own identity within the Star Trek universe, the show is willing to embrace the fact that it's a part of a larger, incredible detailed history. With the assurance that Discovery will sync up with canon by season's end, it's going to be really exciting to watch how our new ship and crew get there.