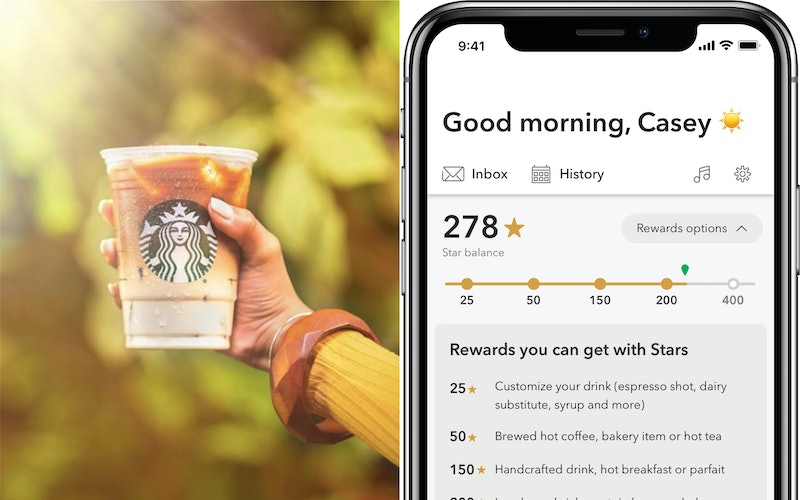 Well, it’s finally arrived: The new Starbucks Rewards loyalty program is here, and with it come a whole host of changes to how the system works. As with any big change, the 2019 Starbucks Rewards program update might take a little getting-used-to; however, thanks to those changes, the system is more versatile than ever — so even if you’ve grown fond of the old system, the new one might actually give you more benefits in the long run, especially if you’re a daily or weekly Starbucks customer.

Originally announced in March of 2019, the revised Starbucks Rewards program operates via a tiered system — that is, instead of all freebies costing 125 stars each, you can now start redeeming them when you’ve got as little as 25 banked, with the rewards growing the more stars you redeem. At 25 stars, you can add one customization to your drink for free; at 50, you get a free brewed hot coffee, bakery item, or hot tea; at 150, you get a free “handcrafted” drink (that is, the fancy ones — lattes, Frappuccinos, etc.), hot breakfast item, or parfait; at 200, you get a free lunch sandwich, protein box, or salad; and at 400, you can redeem them for select merch or at-home coffee.

Confused? Here’s a cheat sheet to all the different rewards and how many stars they cost:

There. Much simpler. A picture really is worth a thousand words.

As you can see, there are both pros and cons to the new system, compared with the old one. Some items, for example, are more now “expensive” in terms of the number of stars you need to redeem them; under the old system, 125 stars were good for any food or drink item on the menu, while under the new system, everything in the 150-star tier and higher will effectively cost you more stars to get. However, you’ll be able to start redeeming your stars much, much sooner now: Before, you needed to reach Gold status — that is, you needed to earn 300 stars — before you could even start cashing them in for freebies, 125 stars at a time. Moving forward, though, you’ll be able to start enjoying your perks after what might amount to just a few visits, depending on your favorite Starbucks order. As Bustle’s Lia Beck noted in March, the new system still works for “Starbucks loyalists,” but might also be “a little more appealing to casual visitors.”

There’s also something to be said for freebies that don’t just amount to free drinks. If, for example, you always use non-dairy milk alternatives rather than cow’s milk: At 25 stars — the cheapest” reward — you can make that substitution for free. And let’s not forget that the “expensive” freebies are a lot more exciting under the new system, too. Being able to redeem stars for merch like tumblers is huge, given how popular Starbucks’ reusable hot and cold cups have gotten over the years.

A lot of the benefits of the old system are sticking around, too. You’ll still get two stars for every dollar you spend; you still get brewed coffee and tea refills for free (even if you originally ordered something else); you still get a free birthday drink or food item; you’ll still earn stars for purchasing ground and whole bean Starbucks coffee at grocery stores; and Double Star Days, games, and other opportunities to earn bonus stars will still be part of the experience. As always, you’ll also be able to order ahead on the Starbucks app, allowing you to bypass the line once you arrive and just pick your drink or food up without waiting; additionally, stars earned via the Starbucks Reward Visa credit card or a Prepaid Card account don’t expire. (For everyone else, stars expire at six months — just, y’know, bear that in mind.)

And, hey, even if it takes some time to get used to the new system, know that you’ve already been through it before. This isn’t the first time Starbucks has made changes to their loyalty program; heck, the thing launched in 2009, so with 10 years of history behind it, it’s only to be expected that it would evolve over time. The last major change occurred in 2016, when Starbucks made the shift to a stars-per-dollar model, rather than a stars-per-visit one: Prior to 2016, you got one star for every order you made, regardless as to what that order was, while after April of that year, you earned two stars for every dollar you spent. That meant that, while a $5 specialty drink like a latte or Frappuccino would previously have earned you the same amount of stars you got from a $2 regular iced coffee, you now earned 10 stars for that $5 specialty drink and four stars for the $2 iced coffee.

In some ways, this latest version of Starbucks Rewards brings together the two previous versions into a kind of hybrid: It combines the stars-per-dollar model of the 2016 version with the structure of the 2009 version, resulting in a tiered model that’s more accessible overall than either of the previous versions were. Check out more at the Starbucks Rewards website here. Drink up!