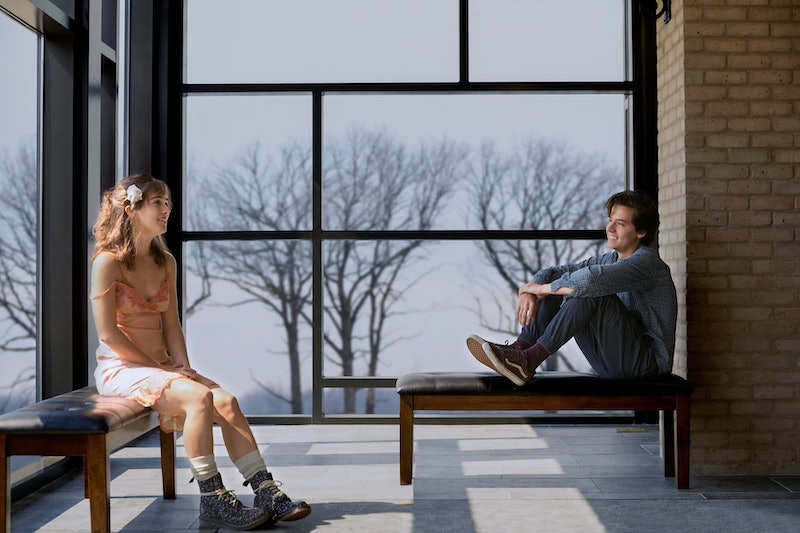 Of all the women underrepresented in media, there is one group whose invisibility I’ve personally felt the most acutely: chronically ill women with surgery scars. Chronically ill women are hardly ever depicted in movies, much less realistically or as the central character in a romantic drama. This absence is sadly not surprising. Doctors often overlook our conditions and complaints; Even the mission statement for the original Women’s March left chronically ill women out. So you can imagine my skepticism going into Justin Baldoni’s Five Feet Apart, a film about cystic fibrosis patients Stella (Haley Lu Richardson) and Will (Cole Sprouse), who embark on a hospital romance during a drug trial. Although I’ve lived with chronic illness since 2011, I didn’t expect to see myself reflected in the movie's teen characters.

During the film’s poignant first date scene, Stella and Will stand next to a hospital swimming pool, a standard five-foot pool cue between them, as they strip down to half naked, revealing their mirrored incisions from multiple surgeries. Cystic fibrosis patients can catch each other’s potentially lethal bacteria, so their best defense is to remain six feet apart. But Stella decides to take back one foot (hence the pool cue) — a protest against everything CF has taken from her.

As Stella stood there, scars across her abdomen and between her breasts, I saw a story I could relate to illustrated on her body. I saw a version of my own physical imperfections represented in a love scene for the first time.

Eight years ago, when I was in my early twenties, I choked on a salad at my desk in a Florida newsroom. From there, things quickly deteriorated. I began choking at almost every meal, then involuntarily throwing up. Even consuming liquids became problematic. A string of doctors called it acid reflux, stress, chest spasms — diagnoses and misdiagnoses that missed the underlying illness. They told me to eat better and drink less coffee. One suggested meditation. They performed two failed procedures, and sent me away with more useless pills. Even some close friends speculated that I had an eating disorder as I ran to the bathroom to puke again. I never realized how much socializing revolves around eating and drinking until I couldn’t do either without risking putting my symptoms on display. I became withdrawn.

As Stella stood there, scars across her abdomen and between her breasts, I saw a story I could relate to illustrated on her body.

I left my job, dropped to a dangerously low weight, my hair fell out in clumps, and some of my toenails fell off, too. Before I got sick, I’d backpacked internationally and risen above a low-income upbringing to be the first in my family to graduate college. Now there I was, back to living with my parents in my rural hometown, barely able to keep food down. For two years, I lived undiagnosed. Then, over the course of one month, everything changed. I pleaded for help, and a doctor listened.

It was the first time I heard the term Achalasia, the name of a rare, chronic disease that essentially causes the muscles of the esophagus to stop working properly. To test for it, a specialist stuffed tubes attached to sensors into my nose and down my esophagus. “It’s practically paralyzed,” she determined. My body was choking itself. I winced. She walked away to chat with colleagues, and her eyes were sad. I wonder sometimes where I'd be if I hadn't found the strength to keep searching for a doctor who would listen. Would I still be alive?

I was sent to University of Florida Health for a surgery that would dramatically relieve my symptoms. I met with the surgeon on a Friday and asked if he had plans Monday. “Let’s schedule it,” he said. He asked if medical students could watch. He explained how and where they’d cut into me, but I didn’t pay much attention to the details. I was desperate. I wanted my life back. They could cut me anywhere.

When I awoke from anesthesia, I was prepared for the pain. But I wasn’t prepared for the incisions. I know there are millions of women with chronic illnesses and surgery scars; scars more like Stella’s or even more severe. That knowledge didn’t make it less shocking to see my own for the first time: Three incisions in a horizontal line across my abdomen and one between my breasts. Dried blood still stuck to them like wax seals. My midriff had always been a pride point for me, as a lover of bikinis and crop tops. But these were my battle scars, I told myself. The instant insecurities I felt when I first saw them transformed into a different kind of pride.

In the weeks that followed, I wanted to show my incisions to everyone who would look at them, as odd as that probably sounds. I wanted those incisions to say, “Hey, look at what I went through, and I’m still here!” I’m not sure what I expected to hear back.

My midriff had always been a pride point for me, as a lover of bikinis and crop tops. But these were my battle scars, I told myself.

“Oh my God,” was the typical reaction, accompanied by a look of shock, sometimes pity, or, worse, disgust. The first few times I went to the beach or wore a short top post-surgery, strangers stared curiously at my scars. I began to notice perfect, unmarked bodies in media like I never had before. I envied scarless, healthy women who didn’t have to see reminders of their illness each time they undressed.

If I sound conflicted about my scars, it’s because I still am. These marks are the only part of my illness that’s visible. But there’s also the pressure among women like me to seem just fine — and they are reminders that I’m not.

It doesn’t help that movies and television tell us that men with scars are attractive and heroic (Oliver Queen on Arrow, Indiana Jones, Luke Skywalker, and so on), while there are very few examples of sexy, scarred leading ladies. Amy Adams's character Camille in Sharp Objects, meanwhile, is the only female lead with realistic scarring that I can readily recall. Maybe that double standard is why Will is not nearly as apprehensive about revealing his scars as Stella is hers.

On the other hand, severely scarred characters of every gender are often villains. When characters are portrayed as good or attractive, their scars are usually neatly healed in subtle locations. Larger, more noticeable scars are often used to identify "the bad guy" or to make them seem more intimidating. In the 2017 movie, Wonder Woman doesn't have any noticeable scars, but the villainous scientist Dr. Poison does.

As she stands there next to the hospital pool, Stella’s scars are deep, reddened, recent. This was a character I've been longing to see in a scene that I'd been waiting for: A young heroine with messy surgery scars letting her fears go, revealing everything, and taking something for herself. And the movie still renders her good and beautiful and sexy.

I still wear my crop tops and bikinis. I have to take medication every day, but I experience much milder symptoms now. The thought that I might need another surgery one day does linger in the back of my mind. But I'm comforted that, through Five Feet Apart, women with stories like mine became a little more visible to the rest of the world — scars and all.