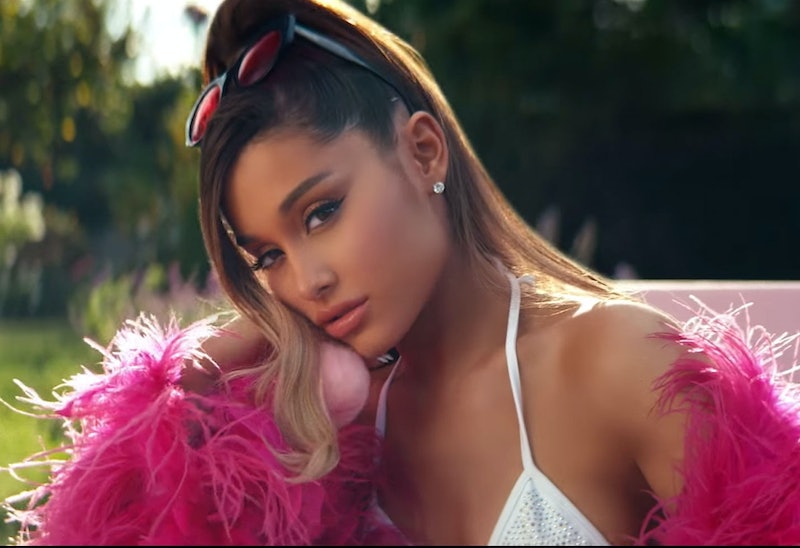 From Madonna’s homage to Gentlemen Prefer Blondes in “Material Girl” to Iggy Azalea’s Clueless flex in “Fancy,” pop stars have long used film as influence for their music videos. This year, however, there was a noticeable influx of clips overtly inspired by a very specific era of memorable movies: the late '90s and early '00s. Artists from Ariana Grande to Charli XCX released videos nodding to some beloved movies from the period, much to the enjoyment of Millennials and Gen Z-ers who grew up watching the films referenced. And by including these shout-outs, artists provided a welcome, comforting escape for viewers amid a socio-politically tumultuous year.

In 2018, many pop artists tapped into nostalgia for entertainment from the past two decades, particularly media released around the precipice of Y2K — a transitional and formative era for young adults. Legally Blonde acted as the inspiration for Sabrina Carpenter’s “Sue Me” music video, while a standout scene from 1999’s Kirsten Dunst-starring Drop Dead Gorgeous is joyfully nodded to in Alex Winston’s glittery video for “Tourist.” Breakout rapper Cardi B channeled imagery from Quentin Tarantino’s cult 2003 action film Kill Bill in the video for “Be Careful” (which was even filmed at the very same church from the movie), while both Halsey and Iggy Azalea incorporated the neon-lit aesthetic of Baz Lurhmann’s Romeo + Juliet (1996) in their respective videos for “Alone” and “Savior.”

There’s more: in his “Lost in Japan” video, Shawn Mendes reimagined Sofia Coppola’s Lost in Translation (2003); Bhad Bhabie’s black-and-white “Gucci Flip Flops” paid homage to Pleasantville (1998); and The Knocks nodded to Men in Black (1997) and White Men Can’t Jump (1992) in their video for “Ride or Die.” Even K-Pop got in on the nostalgic action; in their playful video for “What Is Love?,” TWICE referenced a handful of widely beloved films, with group members portraying characters from titles including The Princess Diaries (2001), Pulp Fiction (1994), and Leon: The Professional (1994). And while not film-related, British singer Anne-Marie nostalgized about Britney Spears’ song “...Baby One More Time” (1998), *NSYNC’s “Bye Bye Bye” (2000), and Jay-Z’s “99 Problems” (2004) in her video for “2002." The trend truly culminated in November, though, when Grande released her YouTube record-smashing video for “thank u, next.” In the visual, the singer referenced not one, but four early '00s rom-coms: Mean Girls, Legally Blonde, Bring It On, and 13 Going on 30.

For viewers who came of age in the early '00s, seeing so many videos make reference to that era's movies likely struck a chord. And it's clear why; the throwback-heavy videos released in 2018 are reflective of a cultural necessity for nostalgic escape. Nostalgia has always been compelling, but these days, it matters more than ever before — especially for young adults — because of the uncertainty surrounding our current cultural shifts.

It should come as no shock that in 2018, studies showed an increase in levels of anxiety and stress. The world is in a scary state; global leaders are failing us, our planet is hurtling towards an environmental catastrophe, inflated living and housing costs coupled with staggering student loan debt have left young adults facing a financial crisis, and marginalized communities are fighting back against persecution like deadly police brutality, transphobic violence, and rape culture. As collective stress levels surge, some people may, understandably, find themselves turning to familiar comforts to ease their worry.

Reminiscence, as it turns out, can be stabilizing in times of distress or transition. This cognitive sentimental function can help us cope with our anxiety, our sense of disconnect, our fear of change, and our uneasiness surrounding the unknown by cushioning us in the plush cerebral bubblewrap of nostalgia. And research reveals that tapping into nostalgia can serve as a powerful coping mechanism for dealing with anxiety. According to Erica Hepper, a psychologist at the University of Surrey, nostalgic yearning appears to be most prevalent among young adults, as a means to “feel happier, have higher self-esteem, feel closer to loved ones and feel that life has more meaning.”

It’s no wonder, then, that millennials, who are “the most anxious generation” according to the American Psychiatric Association, may be engaging in longing for media of yesteryear in order to achieve a sense of security, safety, and familiarity. “There does seem to be evidence that individuals who are undergoing life transitions experience nostalgia more frequently and perhaps more potently,” explains Dr. Andrew Abeyta, an assistant professor of psychology at Rutgers University. “They want to retreat to a place that’s familiar and comfortable, and so it’s no surprise to me that young adults’ entertainment and free time [surrounds] things from their childhood, or things that they have a special connection to.”

The pop artists who revisited the cinematic mementos of the ‘90s and 2000s in their work this year make this point salient. “Cycles of nostalgia tend to correspond to when cohorts experience collective transitional points. You can see it now with the millennial cohort, for example, with old cartoons, movies, and music coming back into vogue,” Dr. Abeyta explains. Take the video for Charli XCX and Troye Sivan’s “1999" — in the clip, the stars recreate iconic scenes from Titanic (1997), The Matrix (1999) and American Beauty (1999). Even the song itself seems to play up the idea of remembering a nostalgic time as an inherent source of comfort: “I just wanna go back, back to 1999 / Take a ride to my old neighborhood / I just wanna go back, sing, ‘hit me, baby, one more time’ / Wanna go back, wanna go."

“Nostalgia is pretty effective in terms of helping people manage particularly in the immediate aftermath of stress,” Dr. Abeyta explains, sharing how “Ariana Grande, for example, went through experiences [this past year] that may have had a profound effect on her and the way she looks at the world.” According to the professor, one of the most useful effects of nostalgia is that it “reassures us that even though we experience stresses and things that challenge us, ultimately, we’re the same people. This alone can give us the strength to move on.”

Pop music is fluid, having the ability — either through lyrics, melody, or, in this case, video — to transport us. It’s also typically reflective of the current cultural zeitgeist. And so during a year that challenged young people in so many ways, the music videos inspired in part by movies we watched over and over in the ‘90s and early 2000s may just have provided us with a critically necessary sense of comfort and togetherness. And like Grande says in her movie-inspired song, that’s something we can all be thankful for.