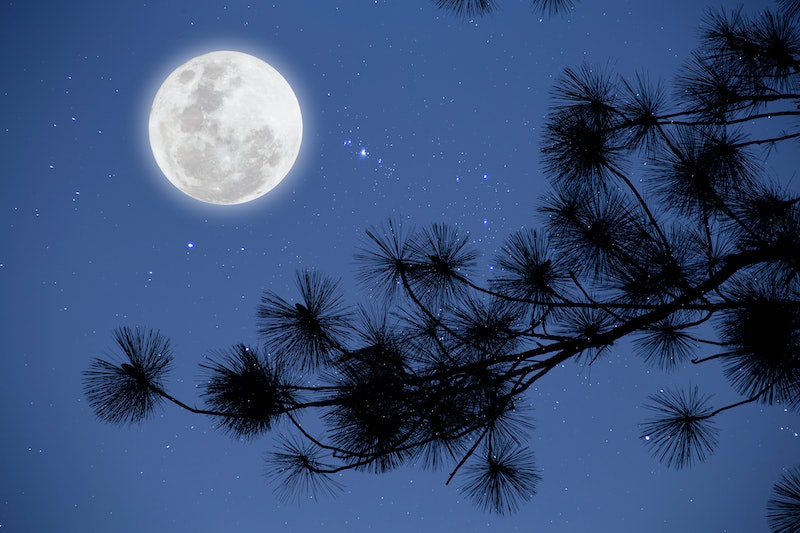 The first full moon of the new year and of the winter season will rise in the sky at 2:21 p.m. EST on January 10, 2020, peaking in all of its illuminated glory later that night. You'll want to know how the January 2020 full moon will affect you, as this cosmic event is likely to shift the astrological flow of energy, potentially creating minor obstacles for each sign on the fresh slate of the new year. Dubbed the "Wolf Moon" by early tribes, this full moon marks the time of year that wolves are most vocal, communicating with each other across vast snowy distances, theoretically most likely to organize a hunt under the brightness of a full moon. While for the wolves this full moon might mean a big dinner, for us it will mean something completely different.

For some moon gazers (located in Europe, Asia, Africa, Australia, and parts of North and South America), there will be a penumbral lunar eclipse (this occurs when the moon passes through Earth’s outer shadow, making the moon appear a smidge darker than usual). Whether you're in an eclipse viewing spot or not, the January full moon is going to have an effect on all of us, as it brings certain things in our lives into the spotlight, whether we're ready to look at them or not.

Bustle talked to astrologer Lisa Stardust about what, specifically, each sign can expect to be faced with, as having the intel ahead of time will give you a chance to prepare yourself and plan around it. That way, your life, work, or personal relationships won't be shaken by what the full moon reveals; rather, you'll have the time and grace to embrace what comes your way and deal with it strategically. Here's what Stardust predicts each sign will experience under the full wolf moon:

According to Stardust, Aries needs to encourage themselves to take a break or they might burn out under the full moon. "You don’t have to rule the world or your home," Stardust tells Bustle. "Try to create a chill environment where you can feel at ease." Forcing yourself to take this break will actually allow you to stay on course for your early 2020 goals.

In order to avoid a very stressful conversation that you instigated for no reason, Stardust says you need to do your research first. "Your intuition may be high, but you’ll need to find out the facts of the matter before you discuss your feelings," Stardust says. "Be sure you are able to back your information up." So, if something is bothering you, put some time into looking into it thoroughly, before bringing it to someone's attention.

According to Stardust, a minor setback at work might be headed your way, but don't think too much about it, the effects are fleeting. "Learning to create a lucrative business and even save money is challenging right now. You may feel like giving up on your dreams as a result. Give yourself one more chance before throwing in the towel," Stardust says, stressing the fact that you can work through it.

"You don’t have to assert your emotions all the time, especially when you know some of your words can hurt," Stardust says. She adds that Cancer should "avoid power struggles and bring the energy back to yourself." If you feel that what you're going through right now is relevant to share, but are unsure of how much to share, try journaling first to organize your thoughts and vet them.

Leo is feeling unfocused, but it's OK, they can afford to. According to Stardust, a little bit of zoning out is actually helpful. "You’re checking out for a while, which is a wonderful idea. Zen out and relax in your own world to avoid peak drama," she says. Staying out of potentially dramatic social or professional situations right now will keep your slate clean.

Virgo is going to have some tension with friends, so ready yourself for this and think about your intentions — are there friendships that have expired that you need acknowledge? Are there friendships that you have neglected that need your attention? "Friendships come and go at this point as a result of unresolved issues flaring up again," Stardust says. "Try to calmly discuss issues to avoid arguments with your crew." Bigger issues can arise when tensions are not addressed.

Libra has good news and bad news ahead of them for the full moon. According to Stardust, "your career will get a boost, which will create tensions in your personal life." Learning to create a better work-life balance is really important right now, and you might need to have a hard conversation with someone you love or work with about boundaries to create that balance.

Scorpios might be feeling feisty and righteous under the full moon, but Stardust says they should keep it to themselves to avoid drama. "Sometimes taking the high road is hard, but you don’t have to have the last word to prove your point. Let go of the negativity to move on," Stardust says. You don't have anything to gain right now by forcing your opinions on anyone.

Sags have been stressing over their finances, and according to Stardust, you should be putting them in the spotlight until you figure out a plan of action to make them less of stressor for you. "You’ll have to find a way to pay off debt — even change your personal relationship with money," Stardust says. Start planning now for a more stable financial future so that you're not overwhelmed by stacking bills to come.

Caps will have an enlightening moment in regard to their love lives during the January full moon. "The road to love has been bumpy, but now you’re understanding what it means to give your all to one person and to receive love as well," Stardust says, hinting at a possibly big realization Caps have ahead of them.

Aquarius has been feeling frustrated by a variety of things at work for a long time now, and under the full moon, they will no longer be able to contain it. According to Stardust, now is the time to speak up if you feel ready. "You’ve kept your mouth shut for too long regarding unfairness and issues with your co-workers," Stardust says.

Pisces might not ready to face it, but according to Stardust, "it’s time to let go of a vision you’ve held on to regarding love." But just because it's not going in the direction you thought it would doesn't mean you won't have the relationship you want and desire in life — it just might mean that this one isn't it. "Remember, there are all different types of relationships and you’ll have to find the one that works best for you," Stardust says.

No matter how January's full moon and penumbral lunar eclipse affect your life, remember that come Jan. 11, many of these issues will resolve, and the ones that don't will teach you an important lesson that you were meant to learn in this new year.