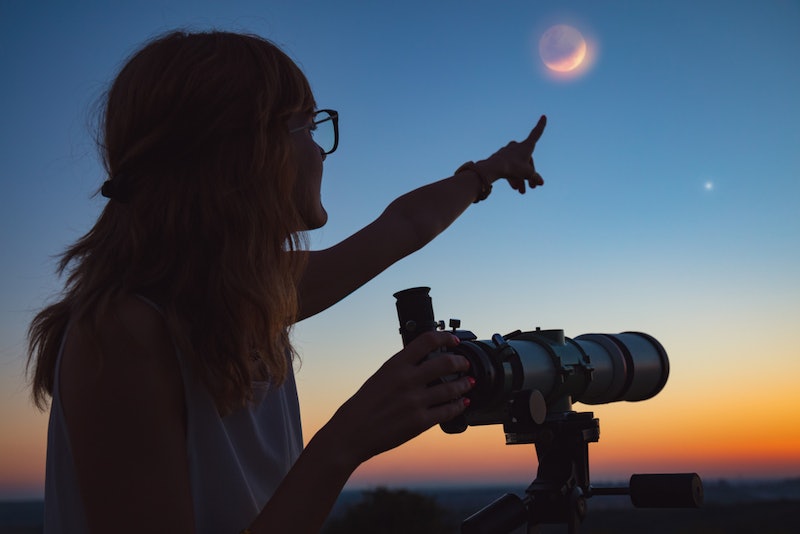 On January 10, 2020, at 2:21 p.m. EST, the first full moon of the year (and the winter season) will take its place in the night sky, treating some stargazers to a lunar eclipse, making this luminary both spectacular and astrologically charged.

In addition to affecting your love life, the eclipse's energy is also going to influence your career. While some signs will be supercharged by the full moon to work hard and win the validation they crave and deserve, other signs will be vulnerable to office drama and power struggles, especially if they're not careful with what they lend their attention to.

Though all full moons can be astrologically influential experiences, the January full moon is a bit extra on account of the fact that (for star gazers in Europe, Asia, Africa, Australia, and parts of North and South America) there will be a penumbral lunar eclipse (this happens when the moon passes through Earth’s outer shadow, which gives the moon an eerie darkness). And, not to mention, the first full moon of the year provides the first bit of illumination and reflection to really bring our resolutions to life.

Bustle talked to astrologer Lisa Stardust about how each sign will feel these effects in their own unique way. Here's what she predicts:

According to Stardust, Aries needs to slow their roll under the lunar eclipse full moon. "You don’t have to rule the world right now," Stardust tells Bustle. "Instead, take a break from chasing after your goals full speed, a more chill environment will actually be more conducive." It doesn't mean you have to slack off, it just means it will be helpful to turn down the intensity and refocus in a few days.

In order to avoid unnecessary tension at the office, Stardust says you need to be extra careful about getting your facts straight before you confront someone at this time. "Your intuition may be high, but you’ll need to be able to back your information up." So, while your gut might be right that something is off, how you go about handling it will make all the difference, especially if you're dealing with someone higher up. If you make a faulty case for a cause, you'll do more damage than good.

According to Stardust, a setback at work might be headed your way and if you're not quick to pick yourself back up, you might be discouraged enough to lose your motivation altogether.

"Managing a lucrative business and saving money is challenging right now. You may feel like giving up but give yourself one more chance," Stardust says, as the reality of the setback is far less damning than it appears during the full moon. Shortly after, you'll realize that it's an obstacle you can handle and one that you can actually really learn from.

Be careful with just how much you express yourself during this time, especially with co-workers and clients. "You don’t have to assert your emotions all the time," Stardust warns, going on to say that if you're not careful, you might hurt people's feelings by expressing your own. So, think before you speak and consider what position you'll be putting this person in by sharing your feelings.

She adds that Cancer should also "avoid power struggles," as they're very prone to them under the full moon — your boss is your boss, no matter their age or how strong your friendship is.

Leo is going to have trouble staying focused at work, but it might actually work to their advantage. During a time that other signs are likely to fall into office drama by socializing too much, Leo is feeling zen and checked out. And, it could really save them from unnecessary drama. That said, they'll have to police themselves a bit to make sure they're not falling behind so early in the new year. Being too zen during the work day is not all that helpful they will soon realize.

Virgo is going to have some tension with coworkers under the full moon, and it will be time to have some serious conversations to sort everything out. "Try to calmly discuss these issues to avoid bigger blows with your coworkers," Stardust says. Though this kind of confrontation can be stressful, know that you will be so relieved after you have these tough talks. It's impossible to do good work when you're distracted by tensions, and the friendships you have with co-workers makes you work better when things are good.

Libra has good news for their professional lives ahead of them, but that might cause some bad news later on. According to Stardust, "your career will get a boost," but the effects of that might mean drama in your personal life.

Libra is always on a mission to balance out their personal lives and professional lives and the January full moon will really test the scale. Be prepared to deal with a loved one who feels like they're not getting enough attention from you and try to meet them with empathy, while maintaining boundaries that support your priorities.

Scorpios are in danger of getting involved in serious drama at work if they're not really careful. According to Stardust, they might find themselves feeling the need to prove a point that doesn't need to be made or harping on the negativity of an insignificant instance with a co-worker or client. "Sometimes taking the high road is hard, but you don’t have to have the last word to prove your point." Stardust says. If you can stay out of it or swallow your pride here, take that route as the alternative will not serve you.

"You’ll have to find a way to pay off debt," Stardust says, as Sags will be feeling overwhelmed by financial strain. There's really no way around it, you've gotten to a point where you can no longer put off your bills and the January full moon will illuminate that reality for you. This situation might inspire you to ask for a raise, but before you do, make sure that you feel that the raise is due to you at this time based on merit, as your personal finances are the the responsibility of your employer.

Caps can look forward to an opportunity in which they will be praised for their hard work, Stardust says. In the prime of their Cap season hustle, Caps will be delighted to have the validation they crave for the impressive output that they've contributed so far in the new year. This positive reinforcement will only encourage them to work even harder.

"You’ve kept your mouth shut for too long regarding unfairness and issues with your co-workers," Stardust says, going on to say that Aquarius is going to be scheduling a meeting under the January full moon to address this. Make sure you're as elegant and diplomatic as you can be when discussing tensions with your co-workers, as you may do a disservice to yourself by speaking with too much judgment or bias of others. Lay out the facts and leave the judgment to the higher ups.

Pisces is having relationship issues during the January full moon, and that might translate to a relationship at work. If you're not vibing well with a co-worker or client, the full moon will illuminate that issue and make it hard to look away from it. It might be easy to solve by talking through it, but you might also need to give up on having any kind of friendship with this person if they're not on the same page about fixing it.

January's full moon and penumbral lunar eclipse will affect us all to varying degrees on Jan. 10, but remember that there's a great lesson to be learned from any setbacks that this luminary throws your way.