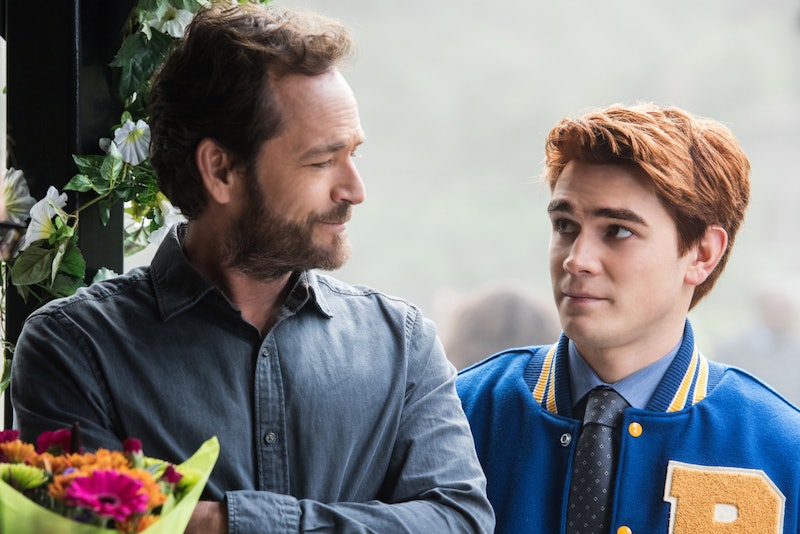 Most of Riverdale's Oct. 9 episode was dedicated to saying goodbye to Fred Andrews, but the actor behind the character got his own mention too. Riverdale dedicated the episode to Luke Perry with an end credits card that read, "In loving memory of Luke Perry 1966-2019," just as they did for the first Season 3 episode that aired after he died of a stroke in March. Even though the show was still airing its third season at the time, showrunner Roberto Aguirre-Sacasa waited until Season 4 to write Perry's character out of the show. "When Luke passed, we very quickly made the decision that we weren’t going to address it [in Season 3]," Aguirre-Sacasa told TV Line. "We didn't want to rush it. We didn't want to sandwich it in between all the other plotlines ... So we thought, 'Let's just hold it, so we can think about it over the hiatus and reflect on it.'"

What came out of that hiatus was an episode that honored both Perry and his character Fred Andrews. "We really wrote it as a tribute to Fred, knowing that most of our viewers, or a lot of our viewers, have a real deep, personal connection to Luke. It just exists," Aguirre-Sacasa said at a recent press screening of the Season 4 premiere, according to Collider. "The truth is that everyone knew Luke, and loved him. That was baked into the episode. We told this story about this man, in this town. It felt like the town would naturally honor Fred for who he was."

Though the episode was focused on honoring Fred, there were some smaller nods to Perry, too. For example, Aguirre-Sacasa fulfilled Perry's longstanding request to find a role in the show for his Beverly Hills, 90210 co-star Shannen Doherty, who played the woman Fred died saving. "Over the seasons, Luke and I had talked a lot about trying to get Shannen on the show, and the timing never worked out, or the part was never quite right, or she was unavailable, or it didn't feel right," Aguirre-Sacasa said at the screening, adding:

"When we were working on the episode, we knew that there would be some characters, outside of our cast of characters that would be involved ... and Luke cared so deeply about Shannen. That's how we got to that. With episodes like this, it resonates for Fred and it also resonates for Luke, and Shannen speaks to that. And she really wanted to be a part of it, from when we first talked to her about it."

Aguirre-Sacasa also said that the show obtained real photos of Perry to use in the scene where Archie's mom looks through some old pictures. "One of our executive producers, Sarah Schechter, was very close to Luke, and very close to his family. We involved them as much as we could," Aguirre-Sacasa continued. "They read the script, and then they provided those great photos. I loved seeing him in his baseball uniform."

Overall, the episode was a thoughtful homage to both Fred and the actor who brought him to life, which is what the Riverdale team set out to do. According to E! Online, when Aguirre-Sacasa first announced that the memoriam episode, he said he was "thankful for this opportunity to honor Luke and Fred" — both of whom got the tributes they deserved.