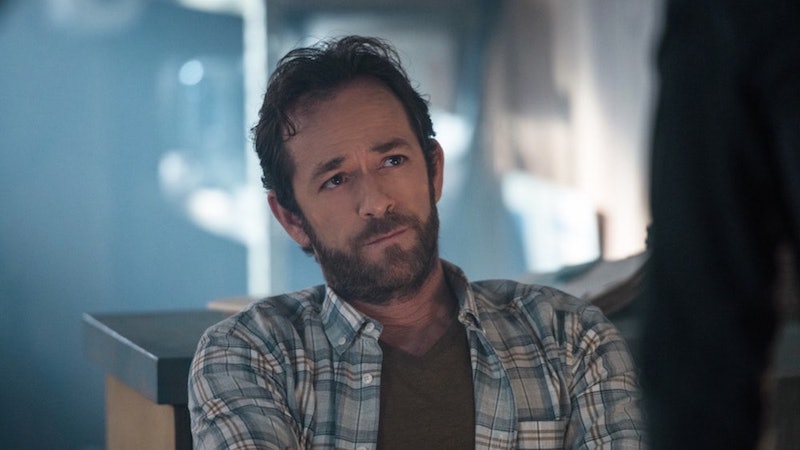 Ahead of the Season 4 premiere of Riverdale, series creator Roberto Aguirre-Sacasa opened up about how Luke Perry’s family got involved in his Riverdale tribute episode. Season 4 is set to premiere on the CW on Oct. 9 and will open with a standalone episode dedicated to Perry, who played Fred Andrews on the series. Perry died after experiencing a stroke on March 4. At a press screening of the episode in Los Angeles on Wednesday, Oct. 2, Aguirre-Sacasa told audiences that the late actor’s family provided personal photographs of him for the episode, according to Entertainment Tonight.

“We did [get those photos from Perry's family]," Aguirre-Sacasa said at the screening, as per the publication. "One of our executive producers, Sarah Schechter, was very close to Luke and very close to his family. We involved them as much as we could. They read the script and then they provided those great photos." He also added that he hoped the tribute episode would be “cathartic” for fans. As per ET, Aguirre-Sacasa told the audience, “I think it is cathartic for people who have seen the show, and hopefully it's cathartic for people who have emotional ties to Luke as well."

Perry's family includes a 22-year-old son, Jack, and 19-year-old daughter, Sophie, whom he shared with ex-wife Rachel Sharp. The two split in 2003, according to PEOPLE. Prior to his death, Perry was engaged to Wendy Madison Bauer. It's unclear when the private couple got engaged, but, as per PEOPLE, the two appeared at the GLAAD Media Awards together in April 2017.

In a new Oct. 2 promo, fans get a glimpse of how the new season will acknowledge Fred Andrews’ death. The clips shows the town of Riverdale gathering for the funeral of the Andrews patriarch. “He was a father to all of us,” Betty (Lili Reinhart) says in the trailer. At the funeral, Archie (KJ Apa) says of his late father, “Fred Andrews will always be a part of Riverdale.”

In May, Aguirre-Sacasa told ET that Perry’s absence would be addressed head-on in the new season. “We knew we had to honor Luke and address Luke's death on the show," Aguirre-Sacasa said in a May 10 interview. "When Luke had passed, we had already pretty much plotted out the end of this season and written the end of this season. Rather than try to squeeze something in and potentially not get it right, we thought, 'Let's take a beat and let's figure out really what would be the best way to honor Luke and to honor the character of Fred." Due to this, Aguirre-Sacasa added that Molly Ringwald, who plays Andrews matriarch Mary, will play a larger role in the new season.

In July, Aguirre-Sacasa also revealed that Perry’s Beverly Hills, 90210 co-star Shannen Doherty would guest star in the tribute episode. More so, Doherty's character plays a huge role in delivering the news of how Fred dies. In a Sept. 12 interview with Entertainment Weekly, Aguirre-Sacasa explained, "She was there and she’s an unexpected source of comfort to Archie. A big piece of what happened to Fred comes to Archie through Shannen’s character. The scene is so heartbreaking because you really feel Shannen’s love for Luke.”

Riverdale returns to the CW on Wednesday, Oct. 9 at 8 p.m.