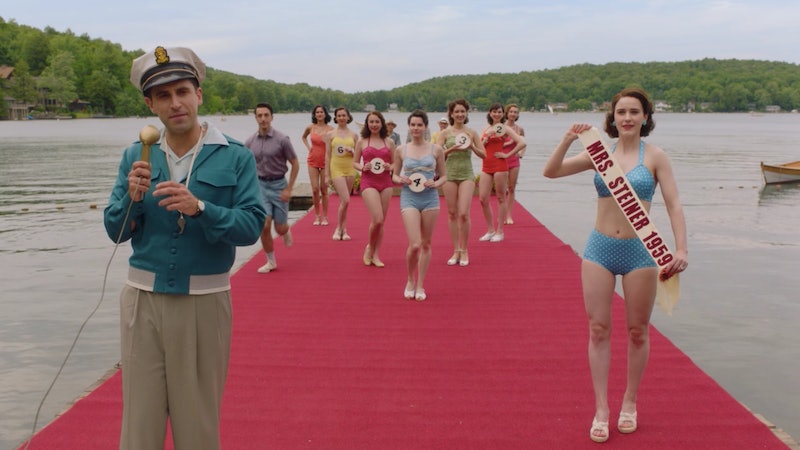 The Marvelous Mrs. Maisel's appeal is manifold. Though aspiring standup comedian Midge can get pretty far on charisma alone, the show's sumptuous attention to the period detail of 1950s New York City and eye-popping, stylized world-building has brought it a layer of prestige sheen not seen since the midcentury modern delights of Mad Men. But in Season 2, creator Amy Sherman-Palladino wanted to go bigger, bringing the signature heightened aesthetic of Mrs. Maisel to two new locations — Paris and the Catskills.

But while the show indulges in recreating post-war Paris for a brief arc in the City of Lights for obvious aesthetic and loosely thematic reasons, Season 2 is most enjoyable when it packs up almost all of its main characters and ships them to the Borscht Belt for three episodes worth of rest, relaxation, and plenty of tomato juice. Sure, the lake views are nice, but the deepening of Mrs. Maisel's historical and cultural context through its inclusion of this locale is one of this season’s greatest strengths.

As anyone who's seen Dirty Dancing or A Walk on the Moon knows, this is far from the first time popular media has paid homage to this particularly Jewish brand of resort culture, which flourished in the first part of the 20th century largely due to the still-acceptable anti-Semitism that permeated hotels and prompted a need for Jew-friendly summer accommodations in a pre-air conditioning era when air travel was not yet widespread. And Mrs. Maisel lovingly recreates this iconic bygone era, when affluent New York Jewish families like the Weissmans flocked to resorts like the fictional Steiner Resort for all manner of outdoor leisure activities. The Catskills culture also played a key role in the entertainment industry, as prominent Jewish comedians like Don Rickles, Lenny Bruce, Joan Rivers, and many more came to the area to entertain their own — a crucial part of history that's weaved seamlessly into Midge's own summertime hijinks when she sneaks out to do a midnight gig at The Concord, then one of the region's largest resorts.

Just as Midge and Rose painstakingly prepared for their summer getaway, so too did the Mrs. Maisel crew. But capturing the spirit and developing the aesthetic of this beloved region was a challenge, given that virtually all of its resorts have long been in a period of severe decline. It was nothing that the Emmy- and Golden Globe Award-winning production couldn't handle, however. Here's exactly how the Mrs. Maisel crew brought the spirit of the 1950s Catskills back to life for one marvelous summer.

How do you find the perfect Catskills resort when it no longer exists? That was the task facing Maisel Location Manager Amanda Foley as she began searching for an appropriate place to film this string of episodes. A major aesthetic touchstone was Grossinger's, a once-luxurious resort that's been left in such disrepair that it's now a destination for those seeking to photograph its eerie ruins. She wanted a place that could match the grandiosity of Grossinger's at its peak, and that meant a place with amenities like a main clubhouse, a pool or a lake, and plenty of space for dinners, dancing, and outdoor activities.

We had gone through every town that you could possibly imagine in New York State looking for this all the way until Lake George.

Ultimately, Foley needed a place that was "high-end enough" that the well-to-do Weissmans and Maisels would believably vacation there. It took her and two location scouts roughly three months of searching until they found something that could match the grandiosity of Grossinger's in its heyday.

"We had gone through every town that you could possibly imagine in New York State looking for this all the way until Lake George," Foley tells Bustle. On one of their last stops, they found the perfect spot: Scott's Family Resort in Deposit, New York. Perched on Lake Oquaga, the still-operating resort had many of the assets Foley was looking for, plus a few that were a pleasant surprise, like the bowling alley that's prominently featured in episode 5.

Though it's still an operating resort, the general decline of the area meant that it was in need of some sprucing up. The owners had slowly been closing down parts of the resort due to decreasing demand, and certain buildings were in need of some TLC. Foley and her team lifted up the Weissman's cottage to make it more structurally sound since it had started to sag, replaced all the windows, and gave the main clubhouse a fresh coat of paint. It was a much-needed facelift for the show, and the resort owners were thrilled to be able to benefit, too.

"They were so grateful, they couldn't believe what we could do," Foley says. "They're hoping this will give them a little boost."

Decorating the interiors of the resort to make them look like accommodations for wealthy guests in the 1950s required similar types of refurbishing. The first thing Set Decorator Ellen Christiansen did upon arriving at Scott's Family Resort was take out all the furniture, much of which was too recent for the time period of the show. She and her team found a few pieces, like some old wicker furniture from the '20s that they wanted to keep, and she sent those back to Brooklyn, where they were painted and fitted with vintage fabric to bring them back to life and give them some period-appropriate detail.

"The owners were practically in tears [when they saw the chairs]," Christiansen tells Bustle, because the makeover reminded them of the resort's more prosperous times. Christiansen's team was involved in all aspects of redecorating the space, doing everything from replacing the too-new bowling balls in the old bowling alley with period-appropriate ones from the '50s to finding vintage rag rugs for the Weissman's cottage that had the perfect cabin feel.

From the moment Christiansen's team found out that Season 2 would take the story to the Catskills, they began scouring flea markets and thrift stores and putting feelers out for vintage items. "We have vendors who find things for us all over the country who go to different fairs," Christiansen says. "It's like, 'Hey, we really need 150 chairs for this Catskills resort,' — which we actually did need — and we had a vendor who knew someone who knew someone."

Getting so many period-appropriate chairs is a regular challenge, since Midge is a performer and Mrs. Maisel has many scenes set in comedy clubs. "We're always sourcing chairs and seating," Christiansen adds. Sometimes the location has them already but they need some refurbishing to brush up any dings or to change the cushions to match the room's color scheme, and sometimes they have to find a huge quantity of vintage chairs elsewhere.

But the hardest part of decorating the location to transform it into Steiner Resort was finding the right balance of styles and periods in the decor. Christiansen didn't want all the furniture to be from 1958 and 1959, the years the show takes place, since most family-friendly accommodations refresh their decor but also keep some pieces from other eras. She rented old hickory Adirondack-style furniture from the 1920s, and peppered in some fabrics and textures that were popular in the 1940s and 1950s. You don't want an "overly designed, of-the-moment, 1950s situation," Christiansen laughs.

Since Season 1 of Mrs. Maisel takes place mostly in the fall and winter, bringing the show to the Catskills in the summertime for Season 2 also meant creating entirely new summer wardrobes for every character.

"I love our coats and I love our purses and gloves and our hats, but it gave us a chance to do something that visually looked completely different," creator and noted hat enthusiast Amy Sherman-Palladino tells Bustle. For the working men like Abe Weissman (Tony Shalhoub), this meant designing some casual looks that were inspired by imagining how they would spend their vacation time.

I really wanted to capture a sense of a bouquet of flowers and naive inspiration in their garments.

"People have routines on vacation. So we wanted Abe to have his different routines when he was on vacation in the Catskills, where he was still Abe, but he would do things slightly differently," Sherman-Palladino says. That led to the delightfully comedic scene in which Abe does calisthenics while wearing a now-iconic male romper on the docks one morning. The jumpsuit, she adds, was inspired by the outfits of Jack LaLanne, a popular fitness expert at the time.

For Costume Designer Donna Zakowska, dressing each character to be in harmony with "the spirited inspiration of the outdoors" meant designing looks that were a combination of practicality and playfulness. Inspired by the shapes of the period, Zakowska dressed the women in colorful shorts sets, one-piece playsuits, and summer dresses.

"I really wanted to capture a sense of a bouquet of flowers and naive inspiration in their garments," Zakowska tells Bustle. The result is scenes in which the actors look like a colorful palette of pastels against the woodsy backdrop of the mountains — a markedly different look and feel from the darker, more saturated colors of Maisel's city scenes.

Though part of the beauty of dressing characters for the Catskills was in seeing how groups of actors wearing different colors could transform the look of a scene with the brightness of their garments alone, Zakowska's favorite Catskills costume is one that's a statement piece all on its own. She says the rainbow striped dress and shorts combination Midge wears with a lampshade-like straw bonnet hat during her awkward encounter with Benjamin on a rowboat is the Catskills outfit she most enjoyed creating.

"It had two traits I particularly love together: beauty and comedy," she says. Given that Maisel's Catskills episodes are a multicolored, sun-soaked romp, it's the perfect metaphor for the show, too.

More like this
UK Viewers Will Have To Wait To Watch The Handmaid’s Tale S5
By Maxine Harrison
Glenda Cleveland Died 2 Decades After Trying To Turn In Neighbor Jeffery Dahmer
By Brad Witter
'Reservation Dogs' Season 3 May Finally Mend Bear & Willie Jack’s Relationship
By Gretchen Smail
'Grey's Anatomy's New Intern Got Advice From Dr. Bailey Herself
By Grace Wehniainen
Get Even More From Bustle — Sign Up For The Newsletter