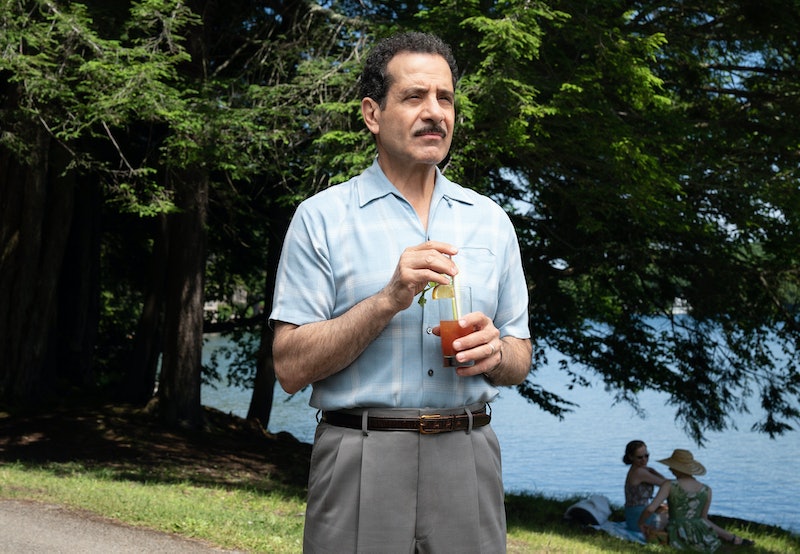 Spoilers ahead for The Marvelous Mrs. Maisel Season 2 ."A romper, Joel — I wear a romper." Is there anything better than the curmudgeonly Abe Weissman (Tony Shalhoub) in Season 2 of The Marvelous Mrs. Maisel? Although Midge's father has an interesting arc this season, his best moments happen upstate in the Catskills. Abe transforms the instant he arrives at Steiner Resort, drinking around the clock, incorrectly filling out his "Catskills alcohol consumption index," and bossing around his poor errand boy, Samuel (Jimmy got that internship, after all!). However, even these scenes aren't the best part: No, Abe's romper in Marvelous Mrs. Maisel is surely the cherry on top of a s'wonderful, s'marvelous season filled with Mr. Weissman-related antics.

Since this is their first summer post-break-up, Midge's ex, Joel (Michael Zegen), forgets to reserve a cabin when he joins them upstate. Miriam convinces him to sleep in her family's sun room until a free space opens up, which troubles Abe — but not for the reasons you might expect. "Look, Joel, up here in the mountains, I do different kinds of things," he tells his son-in-law, hesitantly. And he's not just talking about the tomato juice. "I have a morning routine," Mr. Weissman continues. "Every day, before the sun's up, when everyone's asleep, I do my special outdoor calisthenics. And I wear special clothing. And now that you're down here, you're bound to see me when I head out."

Abe is referring, of course, to what he calls his romper. "It's a one-piece exercise outfit," he explains to a troubled Joel. "Very tight-fitting, and no one has seen me in it — not even Rose. But now, you may see me in it." Needless to say, Joel does see his romper-clad father-in-law the very next morning, and it's clear he's forever scarred.

It's important to note that not only does Abe bring a stool out on the dock with him, but also a glass of tomato juice for a post-workout treat. His calisthenics include jumping jacks, some weird lunges, jogging in place, a single, strained push-up, and squats, among other exercises.

And although Abe claims that Rose hasn't even seen his romper (which seems weird, TBH!), he's obviously proud of his form-fitting ensemble. When he first warns Joel about it, Mr. Weissman offers to put it on for him, "just so [they] can get beyond it." His son-in-law, however, claims that it's fine, saying that he's a deep sleeper. But see it Joel does, and later on, Abe casually asks him, "Joel, you saw me in my romper, didn't you?" to which he responds with a grave, "Yeah."

That said, other people have definitely seen Abe's ensemble. In fact, it seems like a Maisel family tradition. "We've all seen Abe in his little romper," Shirley Maisel (Caroline Aaron) jokes in Episode 6. "It's hysterical." Rose, on the other hand, has no idea what she's talking about. "And so form-fitting," Moishe Maisel (Kevin Pollak) adds. "Every cut of the mohel's knife on vivid display!"

It's unclear how long Abe has been confidently stepping out onto the pier in his onesie, but it does seem strange that he believes no one's seen him in the 27 years the Weissmans have been vacationing in the Catskills. Is this a habit he's picked up in the last few years to stay fit, or have neighbors been peeping on him from their cabin windows?

Also, is his outfit technically a romper? A romper brings to mind a shorts-and-top combo, not Abe's slate-colored, form-fitting get-up. And it's not a casual romper: Not only does it feature a tasteful blue belt, but it also has a collar and blue stripe zipping down the front. In fact, it looks like Jesus Quintana's one-piece from The Big Lebowski with a bit more give in the fabric. Abe's romper does, in fact, look extremely comfortable, and the material moves easily with every lunge, squat, and deep stretch.

This heartbreakingly short scene is all that we ever get see of Abe's perfect, glorious romper, but one can only hope that it will be making a reappearance in Season 3. After all, the Weissmans have been going to the Catskills for 27 years now, and it's doubtful they'll be stopping anytime soon. So here's to you, Abe's romper! May you be safe-kept until next summer.