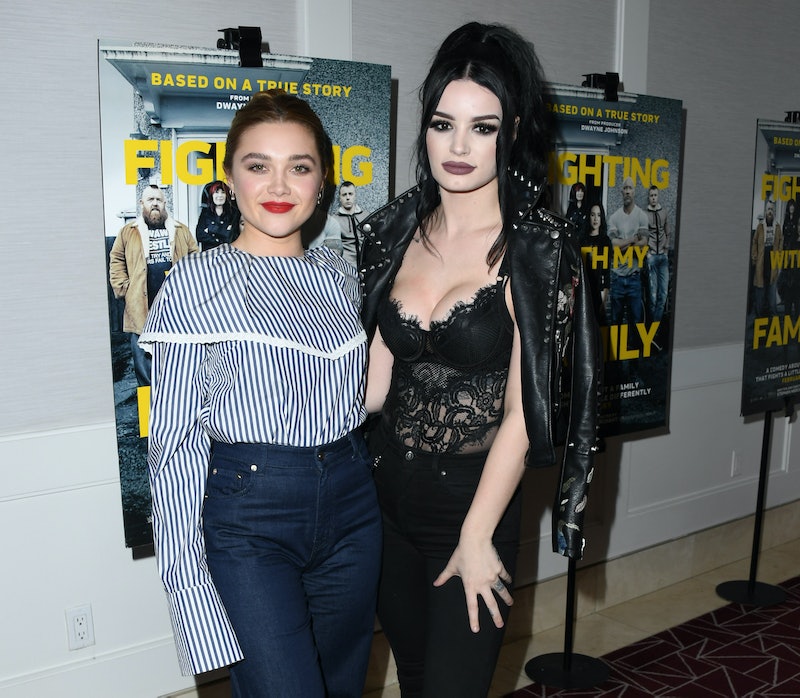 Florence Pugh may have been up against the ropes, but she had the perfect ally in her corner — and, luckily, also in her contact list. When the actor, who plays pro wrestler Paige in the Fighting with My Family biopic, needed some coaching to film the storied match where Paige first takes the Divas Championship, she called upon or, more accurately, texted the WWE superstar herself. "She was like, 'Holy crap, there are 8,000 people in this arena in L.A. right now, and I have to go out and pretend to be you. What do I do?" Paige (real name Saraya-Jade Bevis) recalls to Bustle at a New York City screening for the film.

Director Stephen Merchant shot the scene following a live WWE Raw taping at Los Angeles' Staples Center, and Paige knew Pugh's anxiety all too well. So she didn't sugarcoat her response: Those 8,000-plus fans would be staring at and judging her. "I was like, "You're an actress, zone them out. It's like having a bunch of cameras on you, you just pretend they're not there," reflects the athlete, admitting that her tactic was "easier said than done."

She eventually found the words that packed the biggest punch: "I was like, 'Walk out there and be a just be a total badass.'"

It worked. As Paige explains, Pugh has since described her text message as the best advice she got while working on the film. And Paige gave her plenty of advice, adding that although she and Pugh didn't actually meet in person until after filming wrapped, the actor called or texted her every other day while shooting the inspirational comedy based on Paige's transition from wrestling at her family's gym in Norwich, England to being a WWE Diva.

"I loved Florence. She gets 100 percent on Rotten Tomatoes from me!" Paige gushes of Pugh's portrayal of her story. "We kept in contact and now she's my really good friend."

Paige also had nothing but raves for "wonderful" Game of Thrones star Lena Headey (a.k.a. Cersei Lannister), who portrayed her mom, Julia "Sweet Saraya" Bevis — though the real-life version hasn't been watching the throne. "My mom's not a movie buff or a TV buff, she's a book person. So she didn't know who Lena Headey was and I was like, oh my god, blasphemy! Are you kidding me? I was like, 'It's Cersei Lannister! Hello!' I was like her biggest fan ever."

Shaun of the Dead actor Nick Frost also got in on the action as Bevis family patriarch Patrick "Rowdy Ricky" Knight, who Paige describes as hilarious, outspoken, old school, and someone who "doesn't care what comes out of his mouth." So when it came to her dad's own casting, he scoffed at the choice of Frost, whose work he wasn't familiar with at the time, and, instead, demanded he be played by another British actor, Ray Winstone.

"Then he watched it, and now my dad like loves Nick Frost," Paige adds with a laugh. "He's like, 'He's one of the best actors out there.' I'm like, 'Yeah, because you saw him play you, that's why!'"

Also central to the heartwarming story is Paige's brother Zak "Zodiac" Bevis (portrayed onscreen by Jack Lowden), who tried out for the WWE at the same time as Paige but was eventually cut and remained behind in the UK when she made it. And just as she advocates for him to Vince Vaughn's character Hutch in the film, she's also his biggest cheerleader offscreen too.

"I always say that you don't have to measure your success on how famous you are or how many cameras are in your face or how many Instagram followers you have," she adds. "He wanted to have a family, and he did that. And he wanted to teach disabled kids how to wrestle, and he did that. That's incredible. So I'm like, he's successful, and he thought he had to be like me to be successful. Then throughout the movie, by the very end, he knows that he's successful and why he's doing it."

Dwayne "The Rock" Johnson, who both produced and appears as himself in the film, was entranced by the family, deciding to bring theirs and Paige's story to the big screen after watching The Wrestlers: Fighting with My Family, the documentary on which the film is based, during a sleepless night in London in 2012. When Johnson shared the exciting news of the movie with Paige backstage at WrestleMania in 2014, the famously she says she cried her eyes out.

And as Paige did for Pugh years later, Johnson imparted some wisdom that would carry her through her successful career. "He told me to stay humble and hungry, and it really did help me because I was always feeling like I should fit in, but the thing that was my superpower was the fact that I didn't," says Paige, who now works behind the scenes for WWE, in addition to on-air commentating, following a devastating neck injury. "And the thing that made me successful in my path is that I was different."

And by being her own brand of badass, she helped Pugh become one, too.

More like this
Christina Perri Had No Idea Her 'Twilight' Song Is On YouTube's Top 100 Chart
By Radhika Menon
Angourie Rice Unleashes Her Inner Control Freak
By Jessica Derschowitz
Lewis Hamilton Turned Down A Role In 'Top Gun: Maverick' For This Surprising Reason
By Darshita Goyal
How Director Quinn Shephard Turned Dylan O’Brien Into A “Viral Weed Blogger”
By Samantha Leach
Get Even More From Bustle — Sign Up For The Newsletter