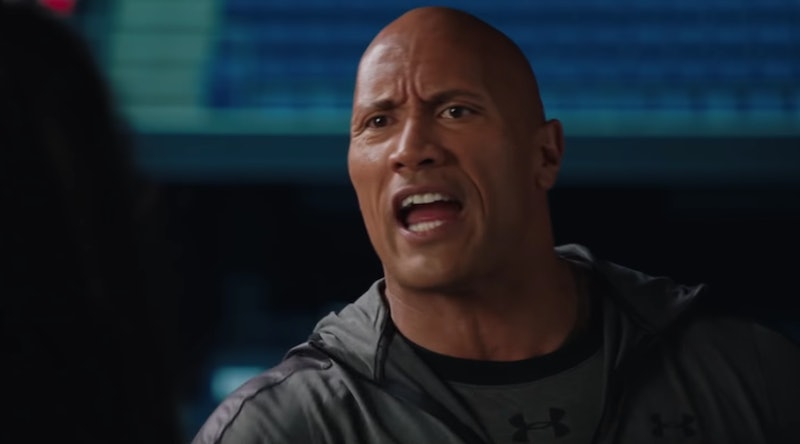 In Fighting with My Family, out in limited theaters now and opening wide on Feb. 22, Florence Pugh plays real life WWE wrestler Saraya-Jade Bevis, who went by "Paige" for her wrestling career. The new film, executive produced by Dwayne "The Rock" Johnson, tells the story of how Bevis grew up in a family of wrestlers from a small town in England before she went on to become a WWE superstar in her early 20s. The Rock plays himself in Fighting with My Family, and the actor has a personal connection to the story about a wrestling family that makes the new movie extra special.

As you may or may not know, Johnson comes from a wrestling family that's known as one of the WWE's dynasties, called the Anoa'i family. The Anoa'i is a Samoan family that famously boasts three generations of esteemed wrestling champs. Technically, Johnson is an honorary member of the the Anoa'i, since his grandfather, Peter Maivia was a "blood brother" to the Anoa'is, there's no doubting that the mega-star has major familial ties to the wrestling world.

Paige's family (known as the Knights), on the other hand, didn't have major ties to the WWE before the 19 year-old Bevis got recruited, as the family lived far away from the US, in a town called Norwich. She's the daughter of two English wrestlers, Patrick Bevis aka Rowdy Ricky Knight (played by Nick Frost), and Julia Hamer-Bevis aka Sweet Saraya (played by Lena Headey). Paige's brother Zak, aka Zak Zodiak, tried out for the WWE in 2011, but only Paige made it into the elite squad. (He's played by Jack Lowden in the movie.) In 2012, the UK's Channel 4 made a documentary about the wrestling family, which carries the same title as the new biopic.

In the trailer, Johnson (as the Rock) tells Pugh's character, "Paige, I myself have come from a wrestling family too. I know exactly what it means to you." Then he adds, "Don't worry about being the next me. Be the first you." It's similar to a real pep talk Johnson gave Bevis in real life.

The real Paige recently told BuzzFeed about how she first met The Rock at 2014's Wrestlemania, where The Rock sought her out, which shocked her. "I was like, 'What the hell am I going to stay to this guy? He's one of my heroes,'" the two-time Divas champion said. It turned out that Johnson wanted to tell Paige that he had seen the Channel 4 documentary and that he wanted to make a movie based on it. Then, Paige recalled, he told her that she'd be winning her Divas debut.

In an Instagram post announcing the production of Fighting with My Family last February, Johnson wrote about his connection to the family element of Paige's story. "Paige and I both know what it's like to come from a wrestling family who's had it's good and hard times. Her and I have talked about this project for years now and we're all excited to bring her and her family's story to life," he wrote.

According to Cosmopolitan, Saraya-Jade aka Paige retired from the WWE in 2018, but her family likely isn't done fighting, and neither is Johnson's. Last summer, Johnson revealed on Good Morning America (per Insider) that his oldest daughter, Simone Garcia Johnson, wants to become a WWE wrestler too.

"I said, 'Honey, whatever your passion is I support that,'" Johnson recalled on the show. "And wrestling was good to me. I started my career in Madison Square Garden, so bring it on. She's going to be a champ."

Sounds like Johnson is going to nurture his daughter's aspirations, just like he did the real Paige. You can watch him relive that moment when Fighting with My Family opens across the country on Friday.