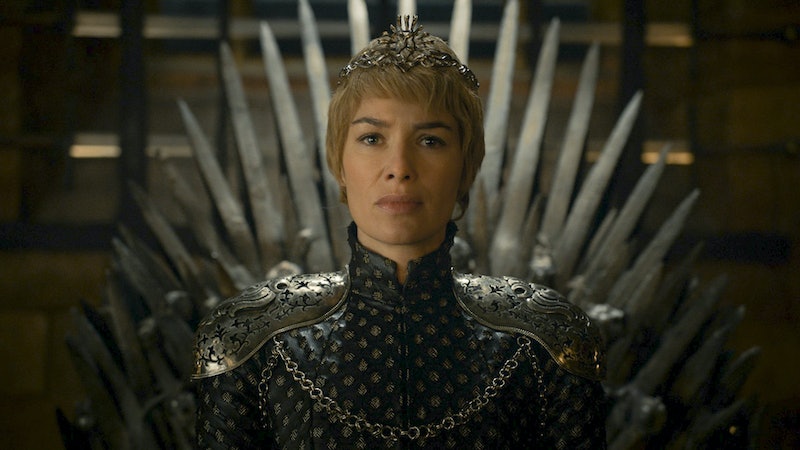 Daenerys Targaryen and Jon Snow had better watch their backs, because the reigning Queen of Westeros doesn't sound interested in giving up her crown. In a new interview with Jimmy Kimmel, Lena Headey hinted that Cersei might keep the Iron Throne on Game of Thrones, despite the late night host's assertion that she may be the only person rooting for her character at this point. That may be true, but Cersei's proven she's a fighter — and she might have what it takes to come out on top of the long game of thrones that the Lannisters, Targaryens, Baratheons, and Starks have been playing since the series began.

It seems easy to dismiss Cersei as a viable candidate to hold the throne at the end of story. Power wise, she may have peaked in Season 6 when she staged the ultimate coup and declared herself the ruler of the Seven Kingdoms. But Headey's words on Jimmy Kimmel Live!, vague though they may be, point to Cersei sticking around for most — if not all — of Season 8. Plus, she was quick to challenge Kimmel when he suggested even she probably doesn't root for the queen at this point. "Someones has to," Headey replied.

Headey carefully avoiding giving away spoilers, but when Kimmel asked when the series completed filming, the actor not only noted that filming ended in October, but also that she was "the 12th one out." Now, Game of Thrones has a huge cast, but presumably, Headey means she was the 12th actor finished out of the primary stars. Depending on how you define the show's "primary" cast, there are roughly 15 major players left — give or take a character. With that reasoning, it seems she was still filming close to the final wrap date. Of course, the show doesn't film scenes in order, so make of this factoid what you will, but it certainly sounds like Season 8 will include a fair amount of Queen Cersei.

Still, that doesn't mean she'll maintain her hold on the Iron Throne. But it would be a great twist if she does. Game of Thrones has gone to great lengths to show that goodness doesn't always prevail in Westeros. This is one fantasy series that is not a morality play — Ned Stark's Season 1 beheading proved that. More often than not, it's the characters who are willing to play the game that win, and neither Daenerys nor Jon have proven that they have what it takes to strategize politically.

The Mother of Dragons and Jon Snow are both heroes. That's why they're the ones focusing their attentions on the North in hopes of keeping the Night King's army from destroying all of Westeros. By contrast, Cersei is using their divided attention to shore up her army in King's Landing by employing the Golden Company. By the time Daenerys and Jon can return to the battle for the Seven Kingdoms, their army could be completely ravaged, leaving Cersei as the character holding all of the cards.

Given the sheer amount of Game of Thrones actors who have suggested the show's ending may not satisfy the fans, it stands to reason that a curve ball may be coming in the final minutes. It could be that Cersei will maintain her seat on the Iron Throne — and if she does, it sounds like Headey will be happy for the Lioness of The Rock, even if the rest of the fandom doesn't share her glee.