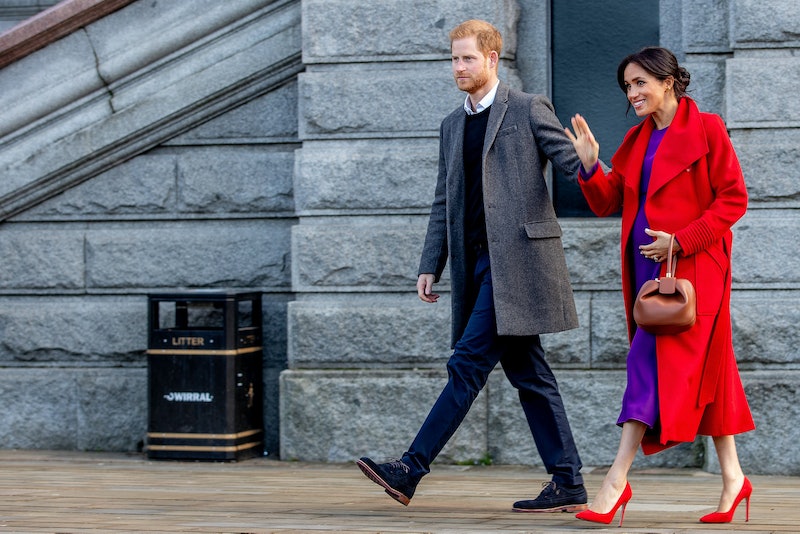 Meghan Markle and Prince Harry's baby is due in late April, which means the countdown is really on. (Well, for Markle, the countdown has been on since she got pregnant, but you know what I mean.) And with the baby almost here, that means it's almost time to find out the most important piece of information: the name. We don't know exactly when we'll find out the baby's name, but how the royal baby's name is announced will probably be pretty simple.

On Thursday, Buckingham Palace released a statement explaining that Markle and Harry will be welcoming their baby in a more private way that some royal family fans might have expected.

"The Duke and Duchess of Sussex are very grateful for the goodwill they have received from people throughout the United Kingdom and around the world as they prepare to welcome their baby," the statement reads (via The Guardian). "Their royal highnesses have taken a personal decision to keep the plans around the arrival of their baby private. The Duke and Duchess look forward to sharing the exciting news with everyone once they have had an opportunity to celebrate privately as a new family."

This makes a couple things clear: We won't know where Markle is giving birth, and there won't be a post-birth, hospital steps photoshoot like there has been with the Duchess of Cambridge's three children.

And it makes sense. Prince William and Kate Middleton's children are in direct line to the throne and their father will be king someday (as will Prince George himself), so events like post-birth appearances are more expected with the Cambridges and will be referenced as major pieces of history for... well, probably forever. Meanwhile, Markle and Harry's baby will be seventh in line to the throne and not in the direct line of succession. If you don't have to pose in front of the world right after giving birth, why not just skip it?

As for how this all relates to the name, if Markle and Harry are keeping things more private, it's easy to guess that some sort of statement will be released not too long after the baby is here that will share the little one's name. It will probably be posted on the Sussex Royal Instagram account and on the official royal family website, since that's generally how the family announces news like this.

Additionally, People reports that the Duke and Duchess will have photos taken in private a few days after welcoming their child on the grounds of Windsor Castle. (They live in Frogmore House at Windsor.) A "palace source" told Vanity Fair, "[The photoshoot] will probably be within a few days of the birth, but there is no time limit. It will depend on how the birth goes and how the Duchess is feeling." Maybe the photos will be shared along with the baby's name announcement rather than doing two separate reveals.

While the couple are keeping things somewhat private by royal standards, People reports that the palace will announce when Markle is in labor. And, according to Vanity Fair, there still will be a traditional notice of birth posted on an easel outside Buckingham Palace to let the public know when the baby is born. While none of this is very private by an average person's standards, these announcements will just give the public the when of the situation, without there being photos or other information right away.

Obviously, no one really knows what the name will be at this point, but that isn't stopping anyone from guessing. The odds favor the girls' names Diana, Victoria, and Alice, and the boys' names Arthur and James. These two could throw a curveball, though. Meghan Jr., are you on the way?

More like this
Keeping Your House Clean Would Be Much Easier If You Tried Any Of These Things
By Hannah Lynn
How to Delete (or Pause) Your Hinge Account
By Emma Carey
How To Fight For Reproductive Rights, Based On How Much Time You Have
By Courtney Young
How To Protect Your Digital Privacy If You Need An Abortion Post-Roe
By Kaitlyn Wylde
Get Even More From Bustle — Sign Up For The Newsletter