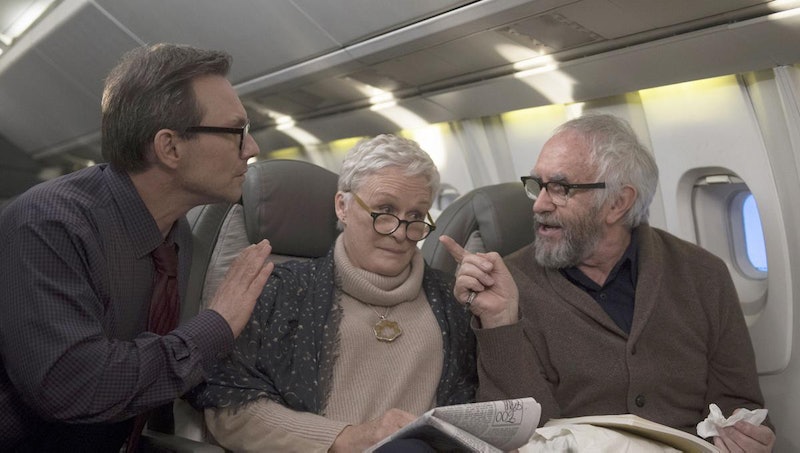 What happens to a woman who makes the best choice for herself at the time, only to watch as the world slowly changes around her? Would she want to — or could she even — change as well? The Wife stars both Glenn Close and Annie Starke as Joan Castleman, the long-simmering woman behind her famous author husband. In a a behind-the-scenes featurette, Close talks about playing a woman living in the modern era whose life was molded by limitations of the past.

Based on the novel by Meg Wolitzer (The Female Persuasion, The Interestings), The Wife came out in theaters August 2018, winning praise from critics who loved watching Joan Castleman's slow burn over the decades, as she stood in the shadow of her husband's career. Close recently won a Golden Globe and was nominated for an Oscar for her performance, which was the sole Oscar nod The Wife received and Close's 7th Oscar nomination. Though she's yet to win a single statue, Close told the New York Times she was thrilled with the nod and added, "It feels incredible to be recognized at this point in my career for a movie that could easily have just disappeared. I’ve done many independent films but there’s something about this story and this woman in particular, even though she doesn’t say much, that has had great resonance with audiences."

With five films under her belt, including matriarchal mystery We Don't Belong Here, Starke is just beginning her acting career. She's also Close's daughter, and their bond takes on a new depth as they swap eras to play the same character. Starke plays Joan's younger self, with the zeal and optimism of a young, talented writer. Meeting a rare fellow female author at a party, Joan's discouraged to hear from her she'll never be taken seriously, not when all the gatekeepers are men. Joan's innate shyness and self-deprecation only serve the status quo, and her eventual choice to marry her former professor and subsume her career to his shapes both their futures.

Close says in the featurette that she and her daughter spent a week discussing the character they share, and the assumptions and struggles each faced performing. "It's a different world post-feminism", Close says, noting that Starke and her husband, both working, have "a totally different kind of relationship than my mother ever could have had." Though Starke grew up in a world with far more opportunity for women like herself, it's not like her own era is that much more progressive, something Close addressed in her Golden Globe speech urging women to find and follow their own passion.

Though lip service is paid to women being "allowed" to have their own careers, numbers don't lie. The Pudding's extensive breakdown of author sales, bestseller lists, and writing genres show that while gender parity in the so-called serious literary genre and books on the bestseller list is far better than previous years, due to equality in acceptance to writing MFA programs, publishers and critics are still causing a bottleneck holding new female authors of all genres back.

In The Wife, Joan reaches a breaking point after decades of taking on the entirety of labor women attempting to build their own lives are still expected to perform for their partners and family. In an amazing comic that neatly names the problem, cartoonist Emma explains what the Mental Load is, and how women tasked with managing and organizing entire households and lives are also expected to evenly split the labor, resulting in a total 75 percent of household labor done. The invisible 50 percent is a burden many women, including Joan, find themselves slowly frustrated by.

In The Wife, that burden exists on top of the sour fact that Joan chose a life near the spotlight, aligning herself with the gatekeepers rather than dooming herself to obscurity by not playing the expected role, near (and possibly closer) to the glory but constantly patted on the head by a husband answering for her, "She doesn't write." When asked her career in the film's main trailer, Joan says, "I'm a kingmaker." As Close explains in the featurette, the hope is women today can make crowns to wear themselves.

The Wife is currently available for streaming purchase across a number of platforms and is coming out on physical DVD/BluRay on Jan. 29, in plenty of time to catch Close and Starke's work before the Oscars.