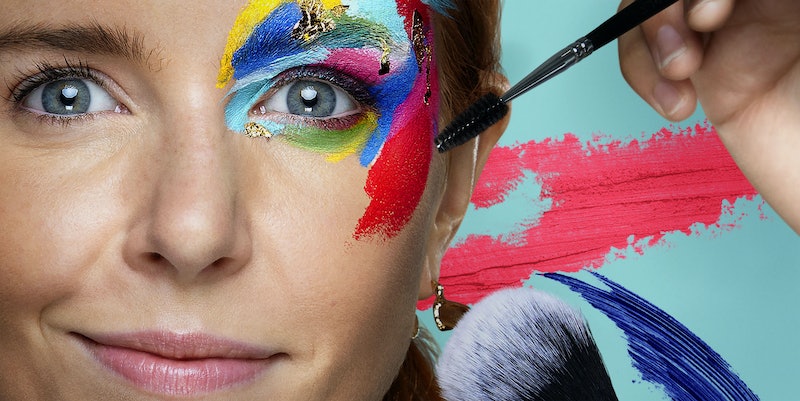 The BBC Three competition series Glow Up: Britain's Next Make-Up Star sets out to discover the very best make-up talent in the UK. The show's contestants are put through their paces in a series of challenges as they aim to impress the onlooking expert judges, who eventually determine the series winner. The first season included a lineup of beauty-themed social media influencers, as well as aspiring make-up artists — and if you think you've got the skills required to become the next big beauty guru, here's how to apply for Glow Up: Britain's Next Make-Up Star.

After a little bit of digging, I have found that the best place to head to apply for Glow Up is the Wall to Wall website, as they are the company behind the casting for the BBC Three show. While BBC Three advised Bustle that a second series isn't yet officially confirmed by the BBC, the dedicated Glow Up page states:

"GLOW UP IS RETURNING FOR A NEW SERIES ON BBC3 DO YOU HAVE WHAT IT TAKES TO BE CROWNED BRITAIN’S NEXT MAKE-UP STAR? Are you an aspiring make-up artist with a creative eye and artistic flair? Are you ready to showcase your skills to top industry professionals? Do you love designing jaw-dropping makeup transformations? If you’re ready to show the world your make-up talent — get in touch now!"

They continue: "If you have what it takes, apply now by completing and submitting the following Application Form." As the series isn't yet confirmed, it's not entirely clear whether the application page is to gauge speculative interest in light of a second series being green lit. Nevertheless, this is probably the page to bookmark if we do get a confirmation on season 2.

The Application Form involves giving all the normal details — name, age, address, etc. — and then it asks for a little more insight into you and your make-up experience. Questions include "How would you describe your makeup style?" and "What is your dream job/area of the make-up industry to work in?" So come prepared with some killer answers to catch the decision maker's attention.

The deadline to get your application in is July 7, 2019. So you still have a little bit of time to work on what you want to say. Phewf.

Glow Up is presented by Strictly Come Dancing winner Stacey Dooley, and contestants are judged by two make-up industry legends: the make-up director of L’Oreal Paris, Val Garland, and the senior artist for MAC Cosmetics, Dominic Skinner. Glow Up follows ten aspiring make-up artists as they battle it out to be crowned Britain's next big make-up star, and win a contract that will see them assist some of the biggest names in the industry.

The format of the BBC Three series is as follows: Each episode the contestants are faced with a variety of challenges, which include a professional assignment to be carried out in the real world, and a creative task which takes place within the Glow Up studio. At the end of each episode, the two contestants who fail to impress the judges must compete for survival in a "make-up skill drill" elimination challenge — the winner of which will remain in the competition for at least another week.

Shortly after the first series of Glow Up was announced, host Dooley received a wave of criticism which suggested that the journalist was "selling out" by fronting a beauty-based television show. Dooley took to Twitter to dismiss the claims, stating that "You can care about human issues, the planet and also be into fashion," and, when addressing the backlash further, she later told the Daily Mail, "It’s painfully predictable: there are always people who are desperate to put you in your one camp and never let you leave. The idea that you could be interested in the Yazidi community and also in lipstick blows people’s minds. It’s a really short-sighted Stone Age attitude; it’s boring, actually."