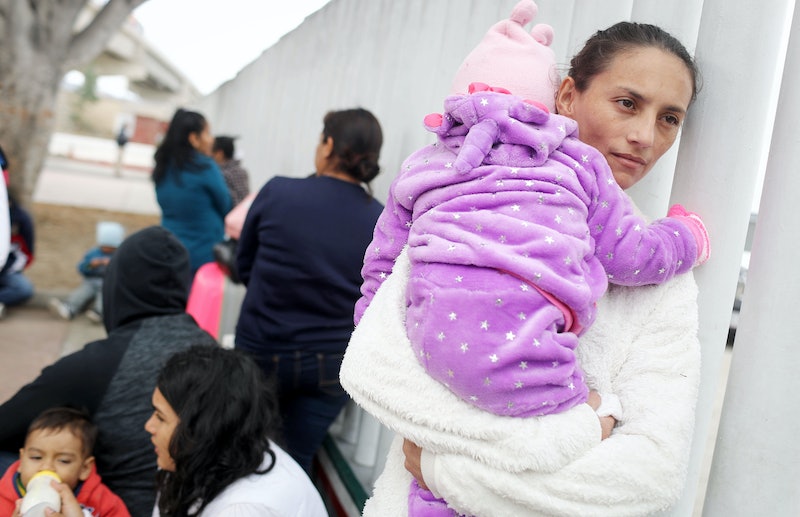 For some people, the deaths of migrant children in Customs and Border Patrol (CBP) custody in recent months have raised questions about how the agency operates. For others, those deaths served as evidence that parents shouldn't take their families on a dangerous journey to the United States. If that position doesn't sit well with you, and you're wondering how to argue that parents aren't irresponsible for migrating with their kids, there are some strategies that will help you better get your point across.

Change "starts person to person," Wendy Feliz, communications director at the American Immigration Council, tells Bustle. "I really think it starts — people will roll their eyes at me — at that Thanksgiving table, when the uncle says the horrible thing about the migrants. And instead of attacking the uncle, you say, 'Wow, why do you think that?'"

If that figurative uncle sides with the Trump administration, he probably blames parents for the recent tragedies. In response to the Dec. 24 death of 8-year-old Felipe Gómez Alonzo, Homeland Secretary Kirstjen M. Nielsen released a statement saying the U.S. immigration system currently "prevents parents who bring their children on a dangerous and illegal journey from facing consequences for their actions." She made similar comments on Fox News' Fox & Friends after the Dec. 8 death of 7-year-old Jakelin Caal Maquin, saying "this is just a very sad example of the dangers of this journey."

If you oppose that mentality and know people who share it, you may want to productively discuss the issue with them. Here's what immigrant advocates want you to know.

Don't Be Afraid To Get Emotional

First of all, Feliz recommends keeping in mind that productive conversations are typically grounded in emotional appeals — "facts on their own just don't do it," she says. However, she explains that asking immigration opponents to "put themselves in immigrants' shoes" isn't usually effective.

"If we're relying super heavily on activating people's empathy response, it's tricky because people have finite resources, particularly when they're dealing with their own pain," Feliz says. "Every human being has a pain. In not ... recognizing some of their issues and building empathy for them, it's hard to ask them to have empathy for someone else."

This can be especially true when people feel that migrants are the cause of their own pain. For example, immigrants are often used as scapegoats for unemployment trends caused by other factors.

Listen More Than You Talk

Ask questions about why the person you're speaking with holds their particular opinions, and probe deeper until you understand the emotional basis of where they're coming from.

But don't just wait to prove them wrong, she warns. "Listen to learn."

Try To Understand Where The Other Person Is Coming From

Rather than asking your conversation partner to imagine what it's like to be a migrant parent, it may be more effective to frame the idea as a question that attempts to better understand them.

"What would it take to drive you away from your community, your home, people who speak your language, and the land that your family has lived on for generations?" Jennifer Nagda, policy director at the Young Center for Immigrant Children's Rights, recommends asking. "What would it take ... to pick up [your] kids and travel thousands of miles on foot with a single backpack of belongings, with no guarantee that you would be accepted when you got to where you were going?"

Feliz recommends using metaphors because they can act as "triggers" that suddenly enable people to view an issue in a new light.

"It's very strong in the American mind that the economy is zero-sum," she tells Bustle. "If you get something, I don't."

People often think of the American dream as a pie, she says, but it can be helpful to give them another image.

"I like to say an economy is actually a quilt," Feliz explains. "When you quilt, you add squares, right? And if you add squares, the quilt becomes larger and larger, and then that quilt can cover more people and keep more people warm... The more workers we add to our economy, the larger the economy gets and the more people it can take care of."

Be On The Lookout For Any Misconceptions

One major misconception people often have about immigration is assuming that migrants are only leaving home to take advantage of the United States. Typically, "people are less trying to get to a particular destination than they are trying to get out of a very bad one," Nagda tells Bustle. Many people who leave Central America, for example, are fleeing violence and extreme poverty that threatens their children's lives.

"It's really something that they're doing out of extreme love," says Megan McKenna, the communications director at Kids in Need of Defense. "One family member said to us one time, 'I'd rather my child and I risk the journey than have my child die at my doorstep.'"

When discussing the migrant caravan that reached the U.S.-Mexico border last fall, you could explain where the travelers were coming from and the dangerous conditions they were fleeing. You may mention that Honduras has the world's highest femicide rate per capita, for example, and that Central America's Northern Triangle has youth murder rates that are four times the global average.

But don't stop there. Again, remember that people may not always be sympathetic when you explain the logic of why they're wrong. "Data alone just doesn't save the day, unfortunately," Feliz cautions.

If anyone is qualified to discuss what it's like to be a migrant parent, it's Maria Asuncion Bilbao, a mother who fled Argentina with her husband and son in 2001 during the Argentine Great Depression and has since become an activist with United We Dream.

"I don't blame the parents," Asuncion Bilbao tells Bustle, referring to the families of the two children who died late last year. "I think the parents tried to do the best that they could ... They want an opportunity for their kids. We wanted a better life for our son, and we did that."