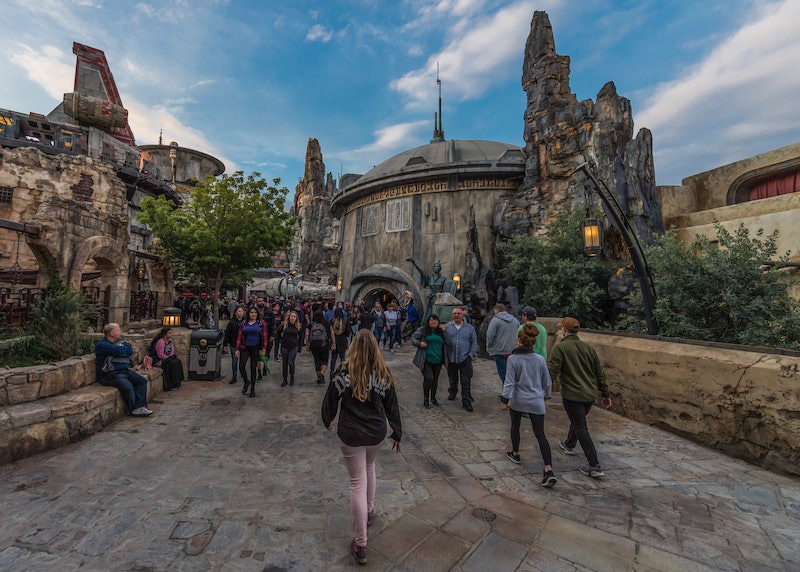 Disneyland’s long-anticipated new land, Star Wars: Galaxy’s Edge, officially opens to the public on Friday, May 31 — and with the opening no doubt comes a lot of questions from curious Star Wars stans, particularly on how to do Star Wars: Galaxy’s Edge in one day. While the park currently requires you to have one of the now sold-out reservations to visit between May 31 and June 23, after that entry is open to the public, with the Disneyland app setting up a virtual queue to let guests in a few groups at a time for crowd control — which means, as any devout Disneyhead knows, that it’s going to be packed to the gills with fellow Resistance recruits, First Order sympathizers, and budding Jedi. That means that if you’re only going to spend one day in the park, you’ll have to do your research to make it count.

Disney invited me on a trip to experience Star Wars: Galaxy’s Edge the day before its grand opening, where I got to see firsthand attractions like the Millennium Falcon: Smuggler’s Run ride, foodie experiences like Oga’s Cantina and the Milk Stand, and character encounters with faces both familiar and brand new. With the combined credentials of being both a journalist and the kind of Star Wars nerd who has googled translations from English to Aurebesh for inclusion in absurdly long fan fictions, I feel relatively confident in advising would-be travelers on the best way to do the park in one day — especially considering that Batuu, the trading planet on the Outer Rim where Star Wars: Galaxy’s Edge is set, is about to have a LOT of people hanging out in its ports. If you’re among its lucky guests, here’s an itinerary if you have a day or less to be there.

1. Get In Line For Millennium Falcon: Smuggler’s Run

I know, I know. “But everyone will get in line first thing!” Yes, this is true, but to that I offer to points: one, that this attraction is so unique that you will not want to risk missing it, even if it’s at the expense of other experiences; the other is that once you go a first time, there’s an extremely high chance you’ll want to go again. Each time you board the Millennium Falcon to help Weequay pirate Hondo move cargo on what turns into a harrowing and exciting mission, you take on one of three roles: pilot, engineer, or gunner. Not only do you have a completely different experience of the ride depending on what role you take on, but every mission is different, depending on how you and your crew perform — and boy howdy, will Hondo let you know it, namely by listing all the damages you’ve done to the ship on your way out. I managed to do the ride three times — once as a gunner, once as the right pilot, and once as the left pilot — and all three ended in completely different scenarios. (Pro-tip, if you can swing it: right pilot gets to yank the ship into hyperspace!)

In my experience of theme park going, lines start to get congested for lunch around noon and then only get worse as the afternoon tapers on; in order to taste the unique culinary experiences the park has to offer, you may want to consider bucking your usual mealtimes and eating early, particularly at the immersive “watering hole” that is Oga’s Cantina, which will typically have a line. Bonus points if you’ve got Disneyland’s app on hand — mobile ordering will be available for three out of four of the Star Wars: Galaxy’s Edge food experiences, including the Milk Stand, Ronto Roasters, and Docking Bay 7 Food and Cargo, subject to menu availability. I extremely recommend the Kaadu ribs and Bantuu-bons at Docking Bay 7 — the former comes with blueberry cornbread and cabbage slaw, and the latter is a creamy, chocolatey, absurdly Instagrammable dream.

This would also be an excellent opportunity to finish off your meal by heading to the Milk Stand to sample the iconic Blue Milk — the drink fans have been wondering about since A New Hope has now been brought to life, and it's a frozen, slightly fruity, perfectly refreshing treat to hydrate yourself on your missions to sabotage the First Order (assuming that's how you roll).

I am not exaggerating when I tell you that there isn’t a single part of this entire park that doesn’t have some kind of fan experience in it, whether overt or hidden. The character experiences, you’ll discover, are pretty different — stormtroopers will patrol while barking orders at you, demanding to see your ID, and asking if you’ve seen any Resistance activity afoot; Kylo Ren will stalk around and tell stormtroopers to pluck individual people out to see if they’re spies; Chewbacca will definitely stop for a hug, unless he sees a stormtrooper, at which point he will BOOK IT out of the area. Every single “inhabitant” — the word swapped for “cast member” in the Star Wars: Galaxy’s Edge park — also has a unique backstory that helps color the park, and they're more than happy to share.

Plus, if you download the Play Disney Parks app, it will turn itself into your own personal Datapad, letting you translate things written in Aurebesh around the park into English, interact with droids in the park, and even overhear conversations happening between characters on hidden frequencies. It will also enable you to play “Outpost Control,” using your Datapad to support either the Resistance or the First Order by hacking panels all over the park. Star Wars: Galaxy’s Edge itself may be relatively contained, but the amount you can do in it without ever having to wait in a line near infinite.

There are immersive merchandise shopping experiences at all price points in the park, depending on how much you can or want to spend. Whereas some fans might want to commit to the more expensive opportunities like the lightsaber building experience at Savi's Workshop or the ability to make your own droid at the Droid Depot, others will be plenty satisfied by the new and unique merchandise that pays tribute not just to the movies fans know and love, but to the larger Star Wars canon beyond it.

The merchandise experience that is truly not to be missed, though, is the street market, where a string of vendors all sell goods and help give Batuu its rural, planet side feel. Among them are the Creature Stall, which features collectible critters from the Star Wars universe, and the Toydarian Toymaker, full of plushes of your favorite characters and all kinds of sweet knick knacks. The stalls are refreshingly hands-on, with vendors encouraging you to try out the different goods for yourself, and showing you all their capabilities. These prices are more in range with typical theme park fare, but also feature merch that is unique to the park — perfect for souvenirs to take back from your travels through the Outer Rim.

5. Get On Smuggler’s Run Again

If you can swing it, do the ride again. Well, "again" is the wrong word, because it won't be the same ride the second time, or the third, or any time, really. Try your hand at all the different positions on the Falcon if you're able, or just take the opportunity to soak it in with more or less of your focus in certain areas of the ride. Even if the line is long, it's set up so you can use the bathroom, purchase snacks, and even encounter characters along the way, so don't be afraid to settle in if you've got the time.

Barring that, though, spend whatever time you have left just wandering around and soaking it in — this is the park a lot of fans have waited a lifetime for, and the magic isn't so much in what you can do there as it is in being there at all. Watching other fans react to things is real time is half the fun. (Following Kylo Ren around while he gripes at people in Mickey Mouse ears is the other half.) Learn more about reservations and admissions to Star Wars: Galaxy's Edge here.