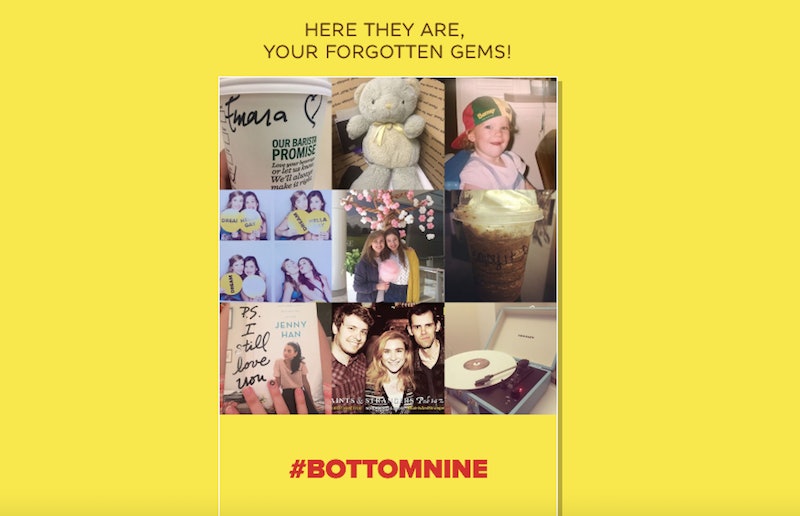 Sometimes social media seems more like a game-ified version of the internet than anything else — we’re all in a constant race to earn the most likes, even though most of the time, it’s basically a Whose Line Is It Anyway? situation: Everything is made up and the points don’t matter. But what if we flip that script? What if, instead of spending all our time with our most liked posts, we take another look at our least popular ones instead? That’s what the Instagram Bottom Nine does: Brought to us courtesy of Kahlua’s Zero Likes Given campaign, it highlights the photos on our Instagram feeds that fell into the great internet abyss, never to be seen by anyone — but still no less worthy of our attention than the photos that end up in our Best Nine collages at the end of each year.

The Instagram Best Nine phenomenon has been filling our feeds with three-by-three collages of our most liked photos of the year annually since 2015. These collages aren’t always assembled by the same website or app; heck, they’re not even always called the Best Nine. (Sometimes — as in 2018 — it’s the Top Nine.) Typically, though, the websites and apps you use to create your Best Nine collages ask you to input your Instagram handle, which then allows it to identify the nine images you posted throughout the year which garnered the most attention (generally in the form of likes). Once those photos have been identified, the website or app generates a neat little collage of them all, which you can then feel free to post anywhere you like — back to Instagram, on Facebook, via Twitter, you name it.

But what about your least liked photos of the year? Don’t they deserve to be remembered, too? Kahlua thinks they do — hence, the Bottom Nine. The tool, which can be accessed here, functions pretty much the same way your typical Best Nine or Top Nine tool does; however, instead of finding your most popular photos of a single year, it finds the photos you’ve posted that have the least likes of all time. Some of these photos, by the way, could have absolutely no likes. And you know what? That’s fine! Not every post is a winner when it comes to imaginary internet points, but that doesn’t make it any less noteworthy.

For the curious, here’s an example of a real-life Bottom Nine, courtesy of Bustle’s very own Emma Lord:

Kahlua’s Bottom Nine launches in conjunction with an actual exhibition showing in New York. Called Zero Likes Given, it, too, highlights some of the least popular photos ever posted to Instagram — and, I think, draws attention to the fact that just because a photo doesn’t garner many likes doesn’t mean it’s a bad photo.

Take this image, for example:

Posted by user @ansonw38, it’s actually quite a striking image; it appears to be a view from inside a pylon or similar structure, looking straight up on a beautiful, cloudless day.

Congratulations, Instagrammer @gomanosuke. That is absolutely a cursed image of an equally cursed doll. I hope this photo is the start of a brand-new horror movie franchise, and also that the doll does not eat your soul while you sleep.

For the curious, Kahlua also conducted a national survey alongside the Bottom Nine and Zero Likes Given campaign asking U.S. millennials about both their Instagram posting behaviors and their thoughts on the whole circus — and the results are actually quite illuminating. It turns out that a full third of respondents said that feel getting likes is one of the most — if not the most — important things about posting on social media; indeed, a third of respondents even said that they tend to start checking for likes less than a minute after they post. A third also said that not only would they absolutely delete a post that didn’t get any likes, but moreover, that they’d do so in less than a minute. It seems, by the way, that the most common unpopular photos posted to Instagram are also some of the most common types of photos posted to Instagram, period: Selfies, landscapes, and food.

I’d actually argue that two other key findings from this survey reveal the ultimate point of the Bottom Nine. 90 percent of respondents said that they believe it’s important to live in the moment… but over half of respondents also said that they’ve straight-up missed important moments because they were trying to capture them on social media. I think the takeaway here is about balance — and about letting go of the idea of perfection. By all means, document your lives on social media; if that’s your jam, go forth and have fun. But maybe it would behoove us all to worry less about making sure that each and every post we make is perfect — because even if it’s not, you’ll still remember what was going on in that moment. Research has even found that capturing moments for social media does help us remember them more vividly — and sometimes, the worst photos have the best stories behind them.

Find your own Instagram Bottom Nine here. And remember: Just because zero likes were given doesn't mean that zero... other things were given.