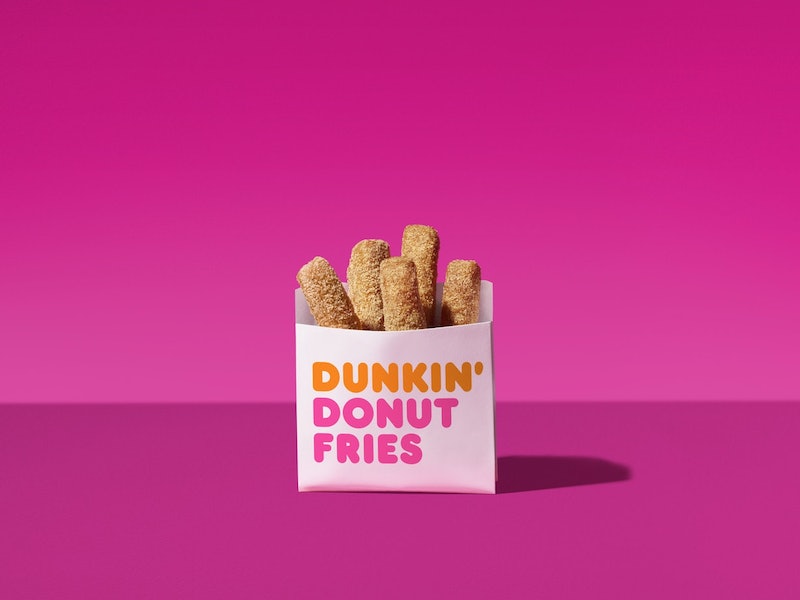 Back in the spring, we heard the exciting news that Dunkin' Donuts was testing out donut fries, an innovative dessert option that combines two of the best foods on the planet: doughnuts and fries. Well, OK, not really... but kind of. Doughnut fries are essentially long donuts in the shape of fries. While some may have worried that the doughnut fries would never pass the testing stage and would become something we could only long for in our dreams, Dunkin' Donuts made the right decision and put them on their menu. On July 2, the company officially launched the doughnut fries nationwide. And now there's even better news: Dunkin' Donuts is giving away free Donut Fries, and this is one offer you definitely don't want to miss out on.

If the term "doughnut fries" somehow isn't enough to convince you that this is a dessert worth waiting on line for, maybe their description will. Doughnut fries are made of buttery croissant dough, then tossed in cinnamon sugar for a doughy, sweet item you'll love. Even better, they're then toasted so that the outside is crispy and the inside is soft and mushy. The convenient size and packaging makes it easy to eat them all in one sitting without feeling like you're just eating a lot of doughnuts all at once (which you basically are, but isn't that what life is about?). Yeah, they're basically a dream come true.

If you now need to get your hands on these, you can — for free. This Friday, July 13, select Dunkin' Donuts stores will be giving away free Donut Fries, no purchase necessary. There's just one catch: only the first 100 people to walk through the door will receive these free doughnut fries, which means you're going to need to wake up pretty early. Honestly, though, a cinnamon sugar fried dough breakfast is worth the early morning wake-up call.

Of course, this isn't happening in every single Dunkin' Donuts in the country, because that would mean they would be giving away a whole lot of Donut Fries. Locations where they'll be handing them out are stores that can be found in the Boston area, Chicago, Los Angeles, New York City, and Tennessee. To find out exactly where you can get your free doughnut fries, you can check out the website.

So why is Dunkin' gifting us with this free menu item? It's actually a surprising reason: it's for National French Fry Day, which falls on July 13. Obviously these doughnut fries aren't French fries, but you know what? They're close enough. And we'll really take any excuse for free doughnuts.

The press release also states that Dunkin' Donuts has even more in store for National French Fry Day, which is very intriguing. Does that mean special flavored doughnut fries? More free doughnut fries? Who knows! But we can't wait to find out.

Donut Fries aren't the only new menu item Dunkin' released for the summer. They announced a new flavor of cold brew called Brown Sugar Cold Brew, which is just as sweet and delicious as it sounds. They also came out with some new summery donut flavors. One is the Chocolate Coconutty Donut, which is a chocolate donut stuffed with coconut créme filling, topped with chocolate icing and real coconut flakes, as well as shortbread cookie pieces.

The second is The Shark Bite, which is a doughnut topped with shark-shaped sprinkles and white icing. We don't know exactly what it looks like or what's in it, but honestly, that Instagrammable description is enough to make us want to buy it as soon as it's available.

For now, I'll be getting ready to wait on line for free doughnut fries. Good luck!