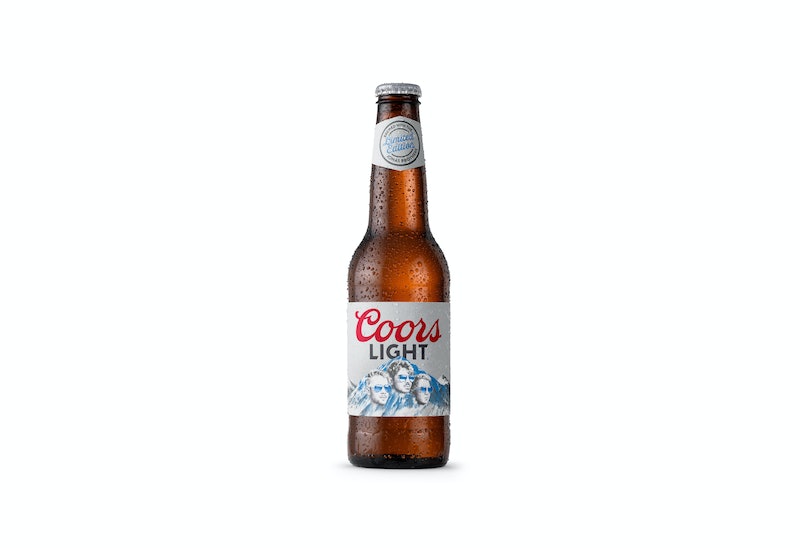 If you’re a longtime Jonas Brothers fan, you’re no doubt familiar with the musical siblings’ deep and abiding love of Coors Light. And hey, guess what? That love has paid off: The Jonas Brothers helped brew a batch of Coors Light recently — and you’ll be able to buy it starting in November. It’ll even have a special label featuring Nick, Joe, and Kevin’s faces plastered across the iconic Coors Light mountains, like some kind of boozy, celebrity-oriented Mount Rushmore. What a time to be alive.

The Jonas Brothers kicked off their Happiness Begins tour on Aug. 7, 2019 with the North American leg taking place through the end of the year before they head to Europe for the international leg in early 2020. When they were in Denver, Colo. for their Oct. 1 show, however, they got to experience something extra fun during their time off: They took a tour of the Coors brewery in nearby Golden. Not only that, but they also got to help make a batch of Coors Light — a batch with special label featuring the boys’ faces which will become available for purchase in November.

“We are long-time fans of Coors Light and were really excited to be invited out to the Coors brewery,” said the brothers in a press release provided to Bustle. They continued, “We can’t wait for our fans to try the limited-edition six-packs of Coors Light that we helped to brew” — and also added that they felt it was “pretty amazing that our faces are on the iconic mountains on the bottle.”

As far as I can tell, the beer itself isn’t anything unusual; it’s just regular Coors Light. What seems to set this batch apart and grant it limited-edition status is the fact that the Jonas Brothers were present for and participated a bit in the brewing process. Personally, I am not a human who becomes extremely excited when items created or handled by a person I admire become publicly available, but if you happen to be that kind of human, then go forth and enjoy this particular batch of Coors Light. For the curious, its official name is Coors Light Brewed With The Jonas Brothers; it will be available in six-packs starting in mid-November in Boston, Philadelphia, Chicago, Nashville, and Tampa via the convenience store delivery app goPuff for as long as supplies last. (My guess is that said supplies likely won’t last long, so be vigilant if you want to get your hands on some of it.)

The Jonas Brothers’ fondness for Coors Light has been well-documented, thanks to the wonders of social media; indeed, this unusual love affair become such a talking point that it’s not unusual to find articles attempting to answer the oh-so-pressing question of why, exactly, the Jonas Brothers are so obsessed with Coors Light. These articles don’t necessarily arrive at any conclusions — mostly they just assemble a wide array of Twitter and Instagram posts featuring the boys and their beer — but what they do usually underline is the fact that these posts typically aren’t sponsored; as Joe noted in the hashtags of an Instagram post celebrating Nick’s birthday featuring a comically large can of “Nick Light,” the whole is “#notsponsored #wejustlovecoorslight.” Now, though, they’ve finally had the chance to participate in the collab of their starry dreams, so, hey, congrats, fellas. Talk about achieving your goals.

The Coors brewery is open to visitors who aren’t internationally beloved pop stars, by the way, so if you want to follow in the Jonas Brothers’ footsteps and take a tour of the place yourself, you can absolutely make that happen. For visitors who are 21 or older, the tour costs $5 for Colorado residents and $10 for everyone else; for that price, you get not just a full tour of the facility and an inside look at what goes into brewing Coors, but also a commemorative glass and up to three eight-ounce samples of beer. Head here for more info.