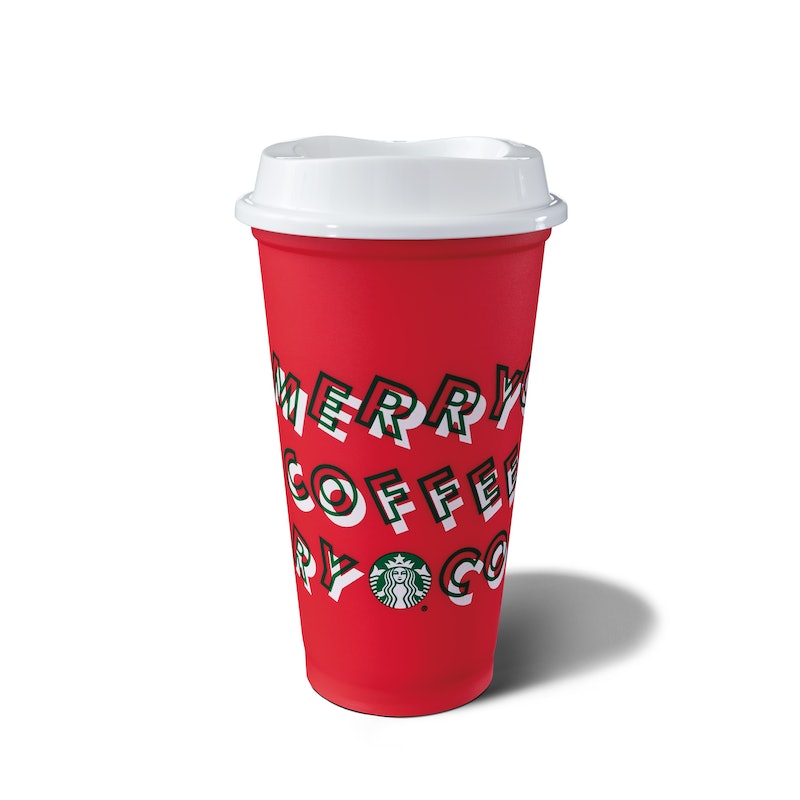 Well, it’s official: The holiday season has begun. How do I know? Because Starbucks’ holiday offerings have now been announced — and this year, it’s not just the Peppermint Mochas and the Cranberry Bliss Bars that are returning to participating stores. The reusable red cups that made such a splash last year are coming back, too. And if you’re wondering how to get a reusable red Starbucks holiday cup in 2019, the good news is that, in theory, it’s super easy. In practice, it might be a little harder; these eco-friendly little drink receptacles are astonishingly popular. But if you’re willing to get to a participating Starbucks early in the day on Nov. 7, when the cups will make their 2019 debut, then you probably stand a pretty good chance of nabbing one for yourself. Here’s what you need to know.

The reusable red cups made their original debut during the 2018 holiday season — and if you were really, really lucky, you could get one for free. When they first arrived in stores on Nov. 2 that year, Starbucks ran a promotion wherein customers who purchased a holiday drink were gifted with one of the reusable red cups at no additional cost while supplies lasted. What's more, the cup continued to be the gift that kept on giving throughout the holiday season: Customers could bring the theirs back to Starbucks after 2 p.m. through Jan. 7, 2019 and receive a 50-cent discount on new holiday drink orders.

If you missed out last year, though, good news: Both the reusable red cups and the one-day free cup promo are back for 2019. The cup’s design is brand new, as well — instead of the plain red design of last year’s option, this year’s features the words “MERRY COFFEE” in red and white letters written around the cup. To get one for free, all you have to do is show up at a participating Starbucks in the United States or Canada on Nov. 7 and order one of the five holiday drinks available this year. When you do so, a reusable cup will be bestowed upon you — or at least, it will for as long as supplies last. Should you be fortunate enough to nab one this year, you’ll also get a discount when you bring it back, too — same as last year. Returning to Starbucks with your 2019 reusable red cup will entitle you to 50 cents off Grande size holiday beverages after 2 p.m. every day between Nov. 7, 2019 and Jan. 6, 2020.

I do, however, recommend that you arrive at your chosen participating Starbucks early; if this year is anything like last year, those cups are going to go fast. In 2018, the reusable cups proved so popular that on the day of the free cup promo, stores ran out of them within a few hours — or, in some cases, mere minutes. They did also become available for purchase shortly thereafter for $2.50 a pop, but a brief period of pandemonium reigned between when the free cups ran out and the for-sale cups arrived.

At least the discount for returning with a cup continued to be offered throughout the season, whether you got your cup for free on the promo day or whether you purchased it later; customers received 50 cents off Grande size holiday beverages through Jan. 6.

The Starbucks holiday drink menu for 2019 includes the Peppermint Mocha, the Caramel Brulee Latte, the Toasted White Chocolate Mocha, the Chestnut Praline Latte, and the Eggnog Latte — so whether or not you managed to get a reusable red cup this year, there’s still plenty of delicious good cheer to be had. Good luck!

More like this
How Long Does Leftover Stuffing Last? Here's When To Toss It
By Chelsey Grasso and Alexis Morillo
15 Gifts That Bring Your Faraway Loved Ones Closer During The Holidays
By Kaitlin Marks
35 Holiday Trivia Facts That Will Impress Your Guests This Year
By Lauren Grant and Emma Carey
TikTok’s Viral Tunacado Sandwich Is The Internet’s Favorite Lunch Right Now
By Alexis Morillo
Get Even More From Bustle — Sign Up For The Newsletter