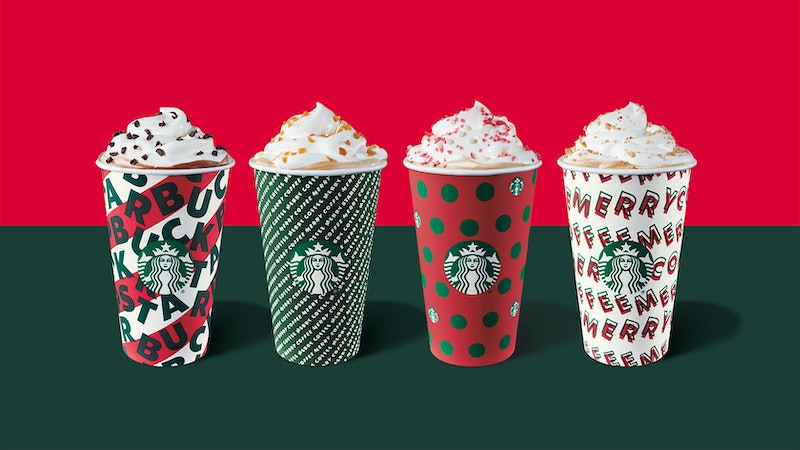 With the conclusion of the Halloween season a few days behind us, we’re now running full steam ahead into the winter holiday season — and you know what that means, right? Yep: The arrival of the 2019 Starbucks holiday drink menu. The Seattle-based coffee giant announced the entire lineup for this year on Nov. 6, with Nov. 7 identified as the date the drink would actually arrive on the menu — and this year, you’ll be pleased to know that the selection is full of longtime favorites. Happy holidays, indeed!

The holiday drinks announcement actually arrived a little later than usual this year — or at least, later than has been the custom in recent years. In 2016, 2017, and 2018, for example, the lineup was either announced or straight-up returned on Nov. 1; in 2019, however, we had to wait a few days longer just for the announcement. And as for the drinks themselves? Well, with a Nov. 7 debut date, they’re making their way to the menu a full week later than the Nov. 1 date to which we’ve grown accustomed. But, hey, the delayed arrival will at least appeal to folks who aren’t terribly fond of holiday creep, right?

In any event, the 2019 Starbucks holiday drink lineup consists of five treats, each and every one a classic: You’ll be able to get the Peppermint Mocha, Eggnog Latte, Caramel Bruleee Latte, Chestnut Praline Latte, and Toasted White Chocolate Mocha at participating Starbucks stores nationwide starting on Nov. 7. How classic are they, exactly? Here’s a quick rundown, for the curious:

The Peppermint Mocha originally debuted during the 2002 – 2003 winter holiday season to great success; indeed, it’s thanks to the popularity of that particular seasonal drink that the Pumpkin Spice Latte was later put into development. The Eggnog Latte, meanwhile, has existed on and off 1986, according to training materials unearthed by Starbucks Melody in 2011, although the recipe itself has changed numerous times since then. The rest of the drinks are a little more recent — the Caramel Brulee Latte arrived in 2009, the Chestnut Praline Latte in 2014, and the Toasted White Chocolate Mocha in 2017 — but they’ve all proven to be enormously popular each year, hence their inclusion in the 2019 lineup.

You’ll notice, though, that there’s also a glaring hole in the menu — one that confirms the rumors that have been floating around for a few weeks in online communities like the Leaf Rakers Society: In 2019, the Gingerbread Latte will not be available in the United States. It’s available in a number of other regions, including the UK and Japan; but for those of us stateside? We’re out of luck.

I'm very, very upset about it.

At least we’ve still got plenty of options, though. Four new cup designs will also be available this year, sprucing up the traditional red cup Starbucks always debuts around the holiday season; and, of course, a number of seasonal eats and sweets will be making a reappearance soon, including the Cranberry Bliss Bar, Sugar Plum Danish, and — thankfully — Gingerbread Loaf. (And least that gingerbread treat is still around.) These seasonal favorites will all be available throughout the holiday season starting on Nov. 7. Cheers!