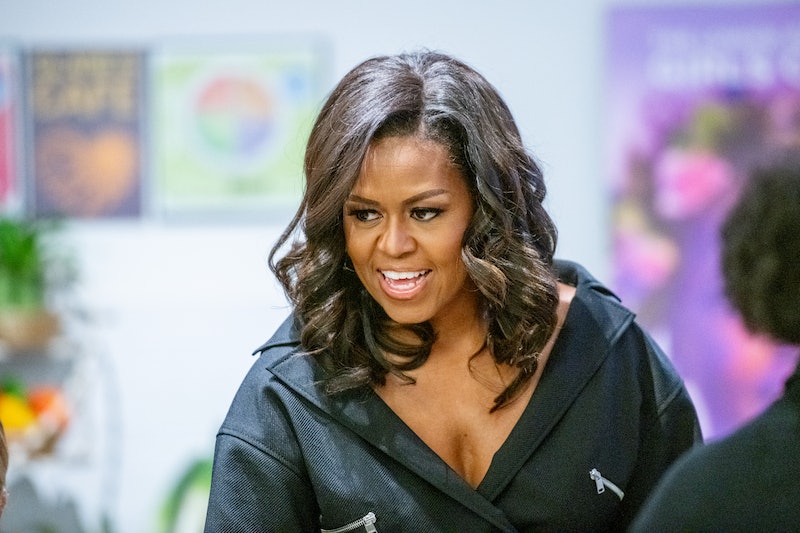 If you've been watching Michelle Obama's various live appearances and wishing you could have been there to hear her pearls of wisdom for yourself, now's your chance as the former First Lady has just announced an extension to her tour. Taking place in 2019, she will be travelling across Europe as well as the U.S. and Canada. So how do you get tickets to Michelle Obama's UK book tour this time round?

Well, you'll be pleased to hear that it should be a lot easier to secure tickets for the new date. Obama first made an appearance in the UK earlier this month, speaking at the Southbank Centre's Royal Festival Hall in London. The venue was pretty small with just under 3,000 seats available for eager fans.

But her new UK appearance, which will take place on Sunday April 14, is in a much bigger space. London's O2 Arena, to be precise. The stadium can fit 20,000 people, allowing many more people a chance to see the 54-year-old up close. General ticket sale will start on Friday December 14 at 1 p.m. If you're an O2 customer, you can join the pre-sale on Wednesday December 12 at 12:30 p.m. Live Nation is also hosting a pre-sale on Thursday December 13 at 1 p.m.

Ticket prices are currently unknown but you're only allowed to buy a maximum of four. A portion of ticket sales will be donated by Obama and Live Nation to various charitable organisations, schools, and community groups.

Obama is touring the world is to promote her recently released book, Becoming. Despite only being published a few weeks ago, more than three million copies of the the memoir have reportedly already been sold. As well as returning to London, she will be visiting several other European cities including Paris, Amsterdam, and Copenhagen.

“I’ve been so humbled by the response to the tour thus far and the overwhelming interest we’ve received from so many communities we weren’t able to visit this year,” Obama told People. “That’s why I’m thrilled that we’re able to expand our conversations to these new settings and wider audiences. I can’t wait to continue the discussions that have been so meaningful for me and, I hope, for so many others.”

Obama's candid discussion with hugely successful author Chimamanda Ngozi Adichie took London by storm in early December. With Meghan Markle reportedly in attendance, the conversation centred on topics such as Obama's experiences as a black woman living in America and on the advice she has for younger women who are still figuring life out.

One of her best tips? "You have to start by getting those demons out of your head. The questions I ask myself — 'Am I good enough?' — that haunts us, because the messages that are sent from the time we are little is: 'Maybe you are not, don't reach too high, don't talk too loud.'

Expect more of the same honesty at next year's O2 date as Obama prepares to recount her inspiring life story including how she survived eight years in the White House and how she fell in love with Barack. I've already got my finger on that refresh button.