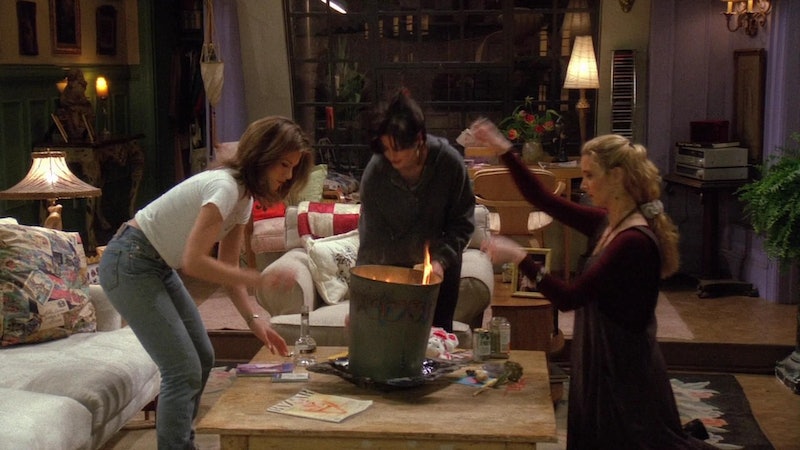 It's nearly time to have yourself the perfect '90s inspired Valentine's Day. It doesn't matter whether you're in a couple, with friends, or on your own — Valentine's Day can be celebrated by anyone, in any situation, and if you add a little '90s flavor it will be even sweeter. We've kind of accepted Valentine's Day as a Hallmark holiday, but in the '90s, it was a super big deal, maybe the biggest deal it's ever been. Cheesy couple stuff was having a real "moment" back then. Our dream couples in the '90s were an inspiration for our own lives, and of course, for Valentine's Day.

Start Obsessing Over Getting A Date If You Don't Have One

In the '90s, having a date on special occasions was essential. Christmas, New Year's — you'd always hear characters on TV and people in your life not only whining, but panicking if they weren't coupled during the holidays. Valentine's Day, obviously, was the cause of the most panic. So if you want to be super '90s this Valentine's Day, be Ross Geller level annoying about not having a date.

And If You Do, Start Obsessing About Having The Perfect Date

And for those who were coupled in the '90s, not wanting to miss out on the anxiety, stress revolved around planning the perfect date. So what are you waiting for, coupled person? Get to pressuring yourself into a state of hysteria over your date plans!

In Fact, Get Heart Shaped Everything

I think you can still get these at your local bodega now, but red roses with those little white ones all around them in the bouquet were about the most romantic thing you could give or receive in the '90s.

If You Get The Opportunity, Engage In Some Shenanigans

Date twins. Schedule two dates at the same time on the same night at the same restaurant. Forget the present. Create shenanigans: the '90s would have.

If You're Having A Galentine's, Have A Cleansing Ritual

If you ask me, Galentine's doesn't have enough of a Wiccan flare. Ask yourself: what would Phoebe, Monica, and Rachel do? The original Galentines, they burned the property of ex-lovers and cleansed themselves of past disappointments. If you've been looking for a chance to get rid of your ex's Van's Warped Tour cap that's been sitting in the back of your wardrobe, now's your chance.

In the '90s, a carefully curated and recorded mixtape could truly act as an expression of love. It's probably impossible for you to record one now (or for the person you're giving it to to listen to it), so do the next best thing and make a '90s style Valentine's playlist for the one you love. You can send it over the Internet, put it on a USB, or if you want to be a 'lil old school, burn it to a CD (assuming you have a computer with a CD drive).

Get All Your Friends Together For A Group Or Double Date

The '90s were a big time for double, triple, quadruple, etc. dates. Bring back the community vibe this Valentine's day.

Wear Red, Or Go All Out And Dress As A Giant Heart

Everyone was dressing up as a heart in the '90s, from the Golden Girls to Screech on Saved By The Bell to Urkel. If you don't have the stones for somethin so bold, dressing all red will do.

Assign Yourself A '90s Couple That's "Just Like You"