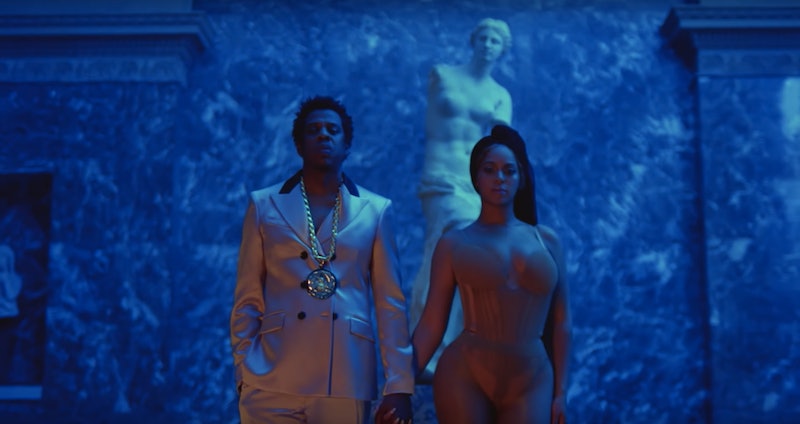 On Saturday, June 16, Beyoncé and JAY-Z surprised their fans by dropping a brand-new joint album Everything is Love on TIDAL. If you're not currently a subscriber, you'll want to know how to listen to Everything is Love if you don't have TIDAL. The bad news is, the album is currently exclusive to the site, but the good news is TIDAL is making it easy for fans to listen to what's sure to be the summer's best collab for free.

EARLIER: As frustrating as it is for fans who rely on Spotify or other streaming services to listen to music, it makes sense for Beyoncé and JAY-Z to release Everything is Love on TIDAL — after all, JAY-Z is one of the site's owners. Typically, the music streaming service costs $9.99/month. In this age of a thousand subscriptions, adding another one to the list isn't always feasible. However, TIDAL is currently offering six months of the service for free. That extended trial period gives devoted Queen Bey fans extra time to enjoy Everything is Love in all of its glory.

For now, at least one song is available outside of TIDAL, and that song is the album's second track, "Apesh*t". Beyoncé and JAY-Z released the music video for the song at the same time they announced the album drop. Shot in Paris' Louvre Museum, the music video is stylish and full of layers for fans to analyze. It's also on YouTube (and Beyoncé's Instagram) — it's not all nine songs, but it's a good place to start if you're looking to get your fix of the Carters.

It's unclear whether or not Beyoncé and JAY-Z will make Everything is Love available through other platforms in the future. However, the odds are good that they will. After all, Lemonade can be purchased on Amazon. Right now, fans will either have to sit tight, or join the TIDAL fray if they want to listen to the entire album — as well as the bonus single, "Salud!".

The release of Everything is Love comes as the couple is wrapping up the first half of their "On the Run II" tour. Beyoncé and JAY-Z will be hitting 21 cities across North America and Canada beginning July 25 in Cleveland, Ohio. They've spent June touring around Europe, specifically England, and their concerts have attracted big name guests including Game of Thrones star Emilia Clarke and Princess Eugenie.

"On the Run II" is a sequel of sorts to the couple's first tour together, "On the Run," which took place in 2014. This new tour marks a fresh chapter for Beyoncé and JAY-Z, both of whom have gotten honest about the difficulties their marriage has faced in their most recent solo albums. They appear to be stronger than ever before these days, as evidenced by the fact that they appear to be releasing Everything is Love under the name the Carters. That sense of unity shines through in the way they've melded their respective styles together to create this latest batch of songs.

The thought of waiting to actually hear what these two have cooked up together is frustrating, especially since they just dropped this surprise into the laps of their fans. At the moment, listening to Everything is Love without TIDAL is simply not an option, but at least there is a way to try out the service without making a major financial commitment.

Go forth and sign-up for a free trial now, people. (And maybe put a note in your calendar as a reminder to cancel before your trial's end date.) Otherwise, you'll just have to pray to Queen Bey that the album is made available through another service soon.

More like this
Everything To Know About Taylor Swift’s 10th Studio Album, 'Midnights'
By Grace Wehniainen and Jake Viswanath
Looks Like She Made It
By Lindsay Zoladz, Beau Grealy and Tiffany Reid
The Spice Girls Just Dropped A Brand New Music Video
By Sam Ramsden
Mariah Carey Is Releasing Her “Lost” '90s Grunge Album
By El Hunt
Get Even More From Bustle — Sign Up For The Newsletter